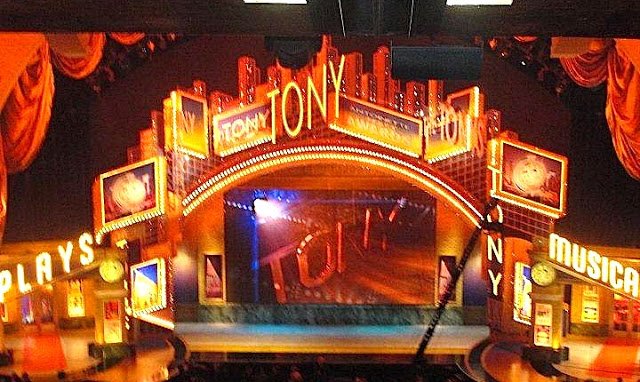 Ah, the Tonys!  The Oscars of Broadway!  Beginning in 1947 at the Waldorf Astoria, the Broadway community still comes together once a year to honor excellence in theatre. This year, the awards were televised at 8 p.m. on CBS with fourth-time host and triple threat extraordinaire, Neil Patrick Harris. Truth be told, I was more excited this year for the fictional Tonys at the end of NBC’s Smash. (I was on team Ivy, in case you were wondering.)

But, I have been an avid watcher of the Tony Awards since I was a kid, peeling my eyes to the television set in the den, watching breathlessly for the live performances that lifted me out of my seat and sent shivers of goosebumps down my spine. Those memorable performances reaffirmed what I wanted to do with my life, and I hope that this year, new generations were inspired to pursue their love of theatre.

The energy from the performers is always explosive during the broadcast. This is probably because they aren’t performing just to the thousands in attendance at the glorious Radio City Music Hall, but to the millions tuning in all across the country.

Every year has its performance highlights. I remember Rent vividly – performing “Seasons of Love/La Vie Boheme in 1996 – snagging the Best Musical award just five months after Jonathan Larson’s death. Then in 1998 came Ragtime, which lost out to The Lion King, but whose electric performance was unforgettable.  However, the best Tony performance of all time – which was before MY time – I believe to be Jennifer Holliday singing “And I Am Telling You…” from Dreamgirls.  Watch this thrilling piece of theatre history for yourself.

Other choice moments from the past include Audra McDonald breaking some kind of record, winning her 3rd, 4th, and 5th Tony Awards. Who’s counting?

Or Alice Ripley’s impassioned speech after her Next To Normal win, shouting maniacally about something or other. Or how about the comic undertones of Wicked competitors Idina Menzel and Kristin Chenoweth singing, “I really hope you get it, and you don’t live to regret it…”  Better yet, remember when poor Bret Michaels got attacked by moving scenery and broke his nose? These live theatre incidents stand out more than the wins themselves.

Though many magical moments come out of the Tony Awards, there is a downside. While the awards are meant to honor the Broadway community, the broadcast is known for having low ratings. To encourage more viewers, the Tonys are star studded with more and more Hollywood celebrities each year who tend to get even more camera time than the nominated actors.  Also, since the Tonys are actually a big commercial to sell tickets and attract tourists, shows that have already closed, like A Christmas Story, The Mystery of Edwin Drood, and Bring It On! don’t typically take home the awards.  Edwin Drood was not even allowed to perform during the ceremony, as it was only open for a limited run.

I have, in fact, attended the Tony Awards twice previously –  not as a nominee or a performer, but as a seat-filler. (This girl’s got connections!) Seat fillers are used because the theater needs to look full for the cameras while the presenters and performers wait backstage for their numbers.  I got all dolled up in a ball gown, and walked into Radio City with my silver clutch, feeling like a celebrity.  Then I was told, “Don’t talk to any of the stars unless they talk to you.”  During commercial breaks, members of the crowd mill about until a ten-second countdown is given, and then they’re directed to new seats in a burst of chaos.

I attended in 2003, the year of Bernadette Peters (Gypsy) losing out to Marissa Jaret Winokur (Hairspray).  I sat up front on an aisle seat, turned my head, and saw Peters leaving a bit early, walking up the aisle with tears in her eyes. I met her gaze and smiled reassuringly, and she smiled back. It was like looking into the face of an angel.

Unfortunately, I have seen very few of the nominated shows this year, (owing to the fact that I have been busy with my own show schedule!), but I did catch the Tony-nominated revival of Pippin. Diane Paulus directed an incredible production of Broadway veterans and circus performers doing feats that mortal bodies should not be able to do, all the while telling a very human story about the search for meaning amid life’s utter disappointments. One of the many highlights of Pippin is the beloved Andrea Martin, who at 66 years old performs trapeze acrobatics that garner a standing ovation every night.

What an exciting show! The Tonys opened with glitz, glamour, and the boyish charm of Neil Patrick Harris, singing the creative lyrics of Lin Manuel Miranda. What stood out to me were the unprecedented number of nauseatingly talented children on Broadway this season, (like the very precise young dancers in Matilda), the beautiful ballgowns in Cinderella, the high flying cheerleaders of Bring It On!, and the fact that Jane Lynch as Miss Hannigan can really sing. I also enjoyed the costumed characters that introduced the musical numbers, like Spiderman introducing Annie, as both originally began as comic strips.

I especially loved a number entitled, “Kiss L.A. Goodbye,” in which Laura Benanti, Andrew Reynolds, and Megan Hilty bitterly lamented about taking time off from Broadway to star in canceled television shows.  (Speaking of Smash once again, I was excited to see real life couple Debra Messing and Will Chase together in the crowd!)

As for the wins, my predictions were accurate.  Pippin swept with awards for both of its leading ladies. I was also moved to tears by Billy Porter’s winning Best Actor in a Musical speech, as he has been kicking around for years, waiting for his moment.

A colleague of mine summed it up best, “Tony Award Season is like going alone to a wedding of a really great friend: You are genuinely happy for everyone involved, but you are also 100% jealous that you’re not the one up there in some way.”

I am overjoyed for the talent that got to shine and be recognized this evening, the veterans and newcomers alike, but I am feeling far behind, riding on the coattails of others.  I guess as it is an “honor just to be nominated,” it is also an honor just to be a part of the Broadway community in any capacity, cheering on friends from the wings.  Perhaps at some point I shall get to attend the Tony’s once more, this time as they read my name from the podium.   After all, as Patina Miller said, it all starts with a little girl dreaming.