With thousands of churches, cathedrals, synagogues, temples, and mosques in the city, New York is home to many magnificent places of worship. Some are historic landmarks, others are intimate neighborhood gathering places, while still others are major tourist attractions drawing scores of visitors every year. And since New York churches cater to the city’s diverse population, it’s not uncommon to find people of all faiths attending a service or stopping by for a prayer. No matter your religion, carve out some time to visit these magnificent New York churches, known for their rich history and stunning architecture.

Completed in 1918, St. Bart’s was built as a Romanesque structure with Byzantine decoration. The building earned landmark status in 1967 and it continues to contribute to the cityscape of this bustling section of Midtown East. St. Bart’s is especially known for its music and choirs. In fact, the pipe organ is the largest in New York and one of the ten largest in the world.

Founded in 1835, the church was originally an Episcopalian parish and located in a small building at the intersection of Great Jones and Lafayette Streets in the Bowery section of Downtown Manhattan. But in 1872, the parish moved to 44th and Madison before the final location where it is today at 51st and Park Avenue.

The restaurant Inside Park is located at St. Bartholomew’s Church and offers indoor seating in what was once the Great Hall. At almost 100 years old, the space maintained many of its original details including 15-foot-high stained glass windows. Inside Park’s famous piazza-like outdoor terrace remains a gathering place for a brunch, lunch, or dinner and seats up to 200 people. You’ll find it buzzing with energy on a warm summer day. (The restaurant is currently closed due to the pandemic, but we hope it will reopen soon!)

Probably one of the most famous cathedrals in the world, St. Patrick’s Cathedral, as it is most often called, attracts more than five million people of different ethnicities and religious backgrounds every year. Beloved for its decorated Neo-Gothic details, it’s the masterpiece of architect James Renwick, took 20 years to complete, and was finally dedicated in 1879.

In 2012, The Cathedral of Saint Patrick announced a $175 million restoration. Since the project’s completion, this iconic church is even more beautiful. St. Patrick’s is on the National Register of Historic Places and a US National Historic Landmark since 1976. When I am on Fifth Avenue, I make it a point to step into the cathedral and light a candle. St. Patrick’s Cathedral is a peaceful oasis in one of New York’s busiest corridors.

Set  in the Morningside Heights neighborhood mere steps from Columbia University, this grandiose structure claims the title of largest cathedral in the world (a church that is also the seat of a bishop), and one of the world’s five largest church buildings. St. John was originally designed in Byzantine and Romanesque styles, but in 1909, it changed to Gothic design.With its grandiose interior, this Episcopalian church is a favorite among New Yorkers.

St. John the Divine closed for repair in December 2001 after a fire, and didn’t reopen until 2008. The church continues to be under restoration efforts, and has been referred to as “St. John the Unfinished.” These efforts are ongoing.

On Palm Sunday in 2019, there was a fire in the crypt. Over several months, the church cleaned and restored the stones affected to ensure safety and stability. 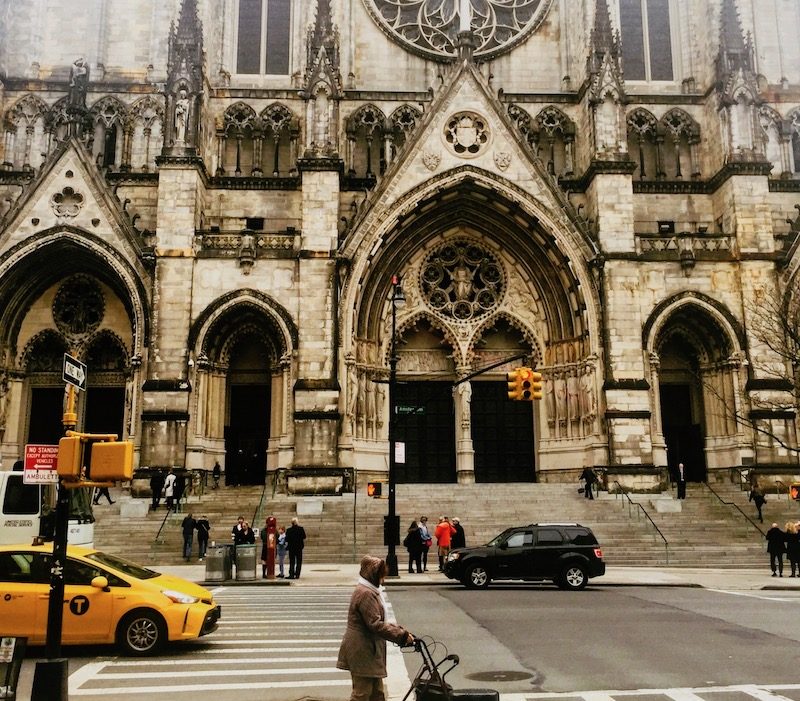 In addition to a St. John being a place of worship for locals and a major tourist attraction, the space lends itself well to music and concerts are performed regularly in the nave. The annual Concert for Peace, a tribute to Leonard Bernstein, is held every New Year’s Eve at St. John. And the Blessing of the Animals ceremony, hosted every October, attracts pets of all species. It’s truly a four-legged spectacle!

This century-plus-old building is a stunning example of the French Gothic style of architecture and primarily serves the Yorkville and Spanish Harlem communities. Known for its 17 stained glass windows, each of which is a memorial to the founding Rhinelander family, the large, translucent walls allow light to stream through into the terra cotta interior. Henry Holiday designed all of the colorful windows, and it’s one of the few churches in the world with windows created by just one person.

This large Episcopal Church, which extends the better part of a city block, features a lovely garden in which services are held in the summer months. The green space is open daily for anyone to enter for peace and quiet, or to pray. Charlotte York’s wedding to Trey MacDougal in the HBO cult classic Sex and the City took place in Holy Trinity.

I used to live in Yorkville and one day wandered down 88th Street only to discover this hidden gem. I was wowed by the presence of this gorgeous church and immediately wanted to learn more. Take a walk by when you find yourself on the Upper East Side.

For a complete list of New York churches by denomination, visit churchangel.com.

St. Bart’s photo by Beyond My Ken via Wikipedia. Church of the Holy Trinity photo via Facebook.