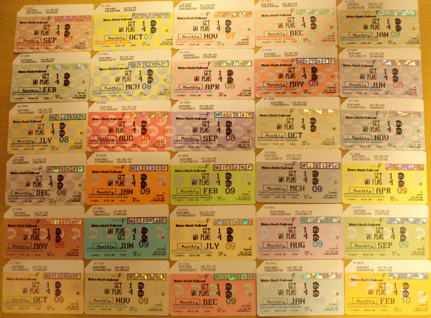 I finally moved to New York after 14 months of commuting from Connecticut.  scratching down some arithmetic, I’ve come to the conclusion that I’ve sat (and sometimes stood) on the train for 40 full days of my life. I’m unclear how many black and white cookies or Hale and Hearty salads from Grand Central I’ve devoured during that dark time, but I don’t think I’ll be craving either anytime soon

I was too intimidated to ask for directions and be written off as a tourist, which is just one level above commuter status. The perception I had about New York was a cross between crowded Times Square on New Years Eve and the the zigzag chaos in Grand Central.

After a few weeks of interning, someone stopped me and asked for directions. Never have I been more proud to say, “It’s your next left.”

Now I’m living with two 20-something girls in a prewar Upper East Side walk-up apartment, and so far, so good. But moving to Manhattan didn’t come without adjustments. When I first began taking the subway last year, I was constantly looking for rats on the train. (One crawled up the leg of someone I know.) I was reluctant to give up things that I thought were exclusive to the suburbs like peace and quiet and affordable groceries. Boy, am I glad I was wrong.

Before I made the move, I went to Candace Bushnell’s book signing at The Hickory Stick Book Shop in Connecticut, where she’s also a native. We chatted and she had a few words of advice for me.

“I love Sex and the City!” I squealed. This was my moment.

“I work in New York, and love to pretend that I’m Carrie Bradshaw!” Yep, these are the words that came out of my mouth and into Candace Bushnell’s ears.

“That’s very nice. Where in New York do you live?”

And then I said it. “I take the train everyday from Connecticut.” I felt like I had broken the Tooth Fairy news to a small child as I told the truth to my journalistic chick-flick hero. I gripped my signed copy of The Carrie Diaries, fearing she’d rip it out of my hands for letting her down.

“You should really move to New York. It’s so fun,” she assured me.

Admittedly, I had to move to New York to have city experiences like I’ve watched on Sex and the City.Then came Strike #2.

It hit me when a sad and overworked 30-something train seat-mate offered some unsolicited advice. “All you need to take care of now is you. Don’t you realize your whole life won’t always be about you? If you don’t live in NYC for yourself, no one is going do it for you.”

That conversation was eating at me for days. Ok, so I needed to live in New York City or I’d become a sad woman who resented my twenties.

And, at last Strike #3. This stung so badly that I immediately reached out to everyone I knew in the city for apartment help. The epiphany came to me in the form of a new friend’s 29-year-old sister on the eve of her 30th birthday. After telling her that I work in Manhattan, but don’t live there, the college graduate and mother of two grabbed me, “I grew up in Long Island and always dreamed of living in the city just like you. Now, my only hope is that my one-year-old daughter will have the same dreams, and will want her mom to live with her in an apartment when she studies at NYU. Don’t miss the boat, Michelle, or it will be too late.”

That same week I went to see an apartment on the Upper East Side. A former coworker’s sister’s best friend needed a roommate. I’m ashamed to admit how easy the apartment search was for me. I fell in love with the granite counter tops, hardwood floors, high ceilings, white walls and exposed brick. I moved in two months later and haven’t looked back once.

People no longer ask, “Why are you doing this to yourself?” Instead, the most common question that my family and friends ask is, “What do you do with all your free time now?”

In that year of my life, I was able to save some money and pay off most of my student loans. Even though the seats on Metro North destroyed my posture on the daily 3.33 hour sit-a-thons, I made some cool drinking buddies on the train.  All that aside, I don’t regret that year. It triggered my desire for a shorter commute, a heightened appreciation for city life, and my hunger for everything New York could offer me — even if it meant breaking out of my comfort zone.

In the month that I’ve been a real New Yorker and no longer a transient one, I’ve hosted a wine and cheese night with my friends and roommates, gone to a swanky restaurant opening in Brooklyn, and watched the production of Gossip Girl in my neighborhood. As for free time, I barely have a moment to do laundry. So when my mom asks what I’m doing with an extra 16 hours a week, I just say, “I’m reading a lot of books.”

Is NYC exactly like television? Not quite, or perhaps I missed the episode of SATC when Carrie shed her fur coat on the subway platform to momentarily escape the heat of blasting filthy air. Does anyone on TV even take the subway?

My shoes’ scuffed soles live in the packed storage bins beneath my bed, but I’m no longer seeing Google ads for travel neck pillows. I’ll never get back those 40-plus days of my life commuting on Metro North, but I’m making up for it now that I’m living in New York.

« TasteMakers NY: The Photography of Joann Jovinelly
Best Halloween Places to Get Spooked in Brooklyn »