When family and friends visit New York, it’s an opportune time to take in a few sights and step beyond the normal routine, which for me, is a seven-day workweek of blogging and editing.

This week I played tour guide for my sis-in-law, Amy, and my soon-to-be-graduating niece, Whitney, who was on her very first trip to New York City from Atlanta. With only a few days, we had to move quickly and efficiently to hit as many NYC highlights as possible. If you visit New York and have a short time, you can definitely make the rounds if you plan ahead. I also want to mention that Amy and Whitney went to Chinatown and a took a tour of Rockefeller Center on their own time.

Day One
First stop, pick-up at the Hotel Wellington at 55th Street and 7th Avenue. We proceed to the subway at 50th Street, ride to Rector Street and walk to the 9-11 Memorial. Note: I recommend ordering timed tickets before arriving to guarantee admission. Since it was mid-week, we didn’t have to wait at all. I imagine weekends would be more crowded. 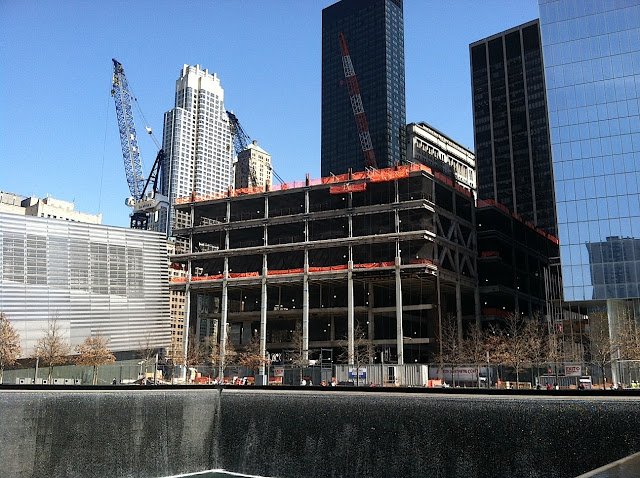 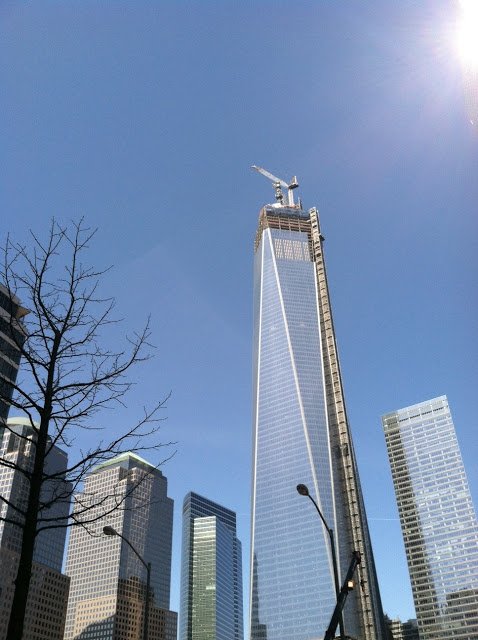 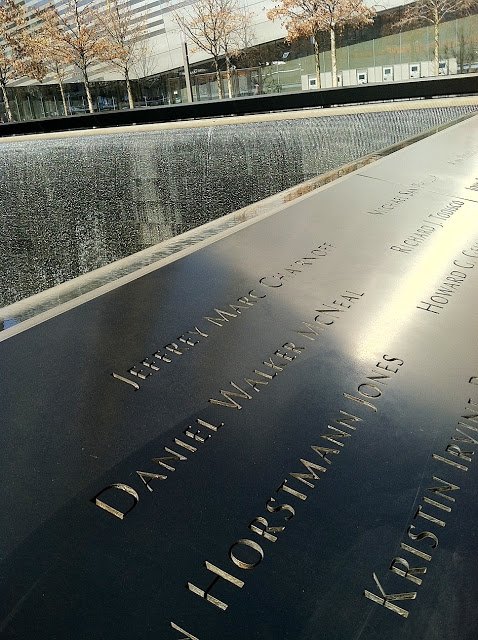 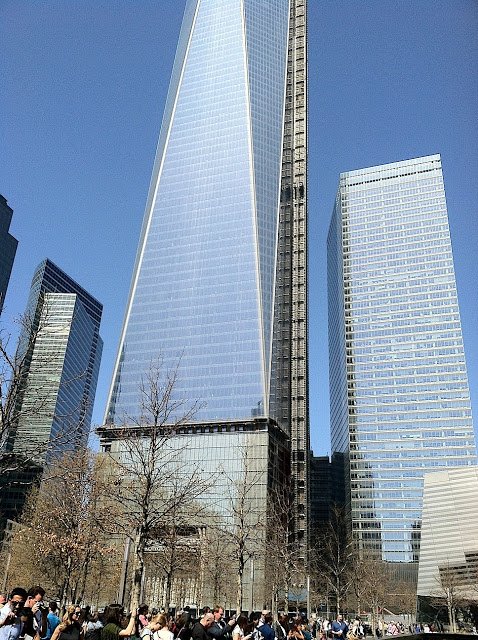 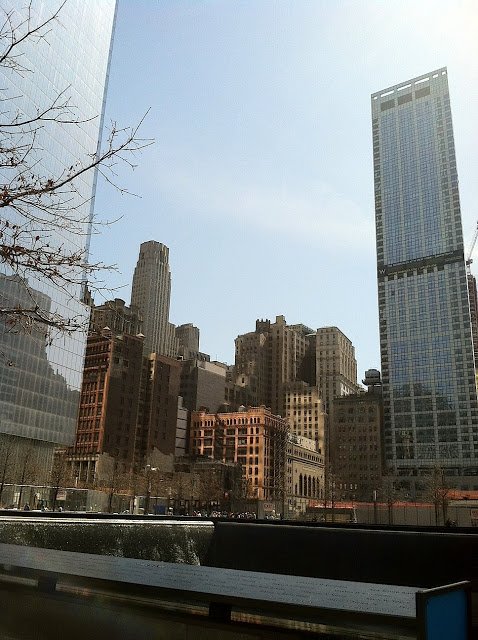 I recommend visiting the site on a fair day, but know that most of the area is not shaded and in direct sun. (As the weather warms, be prepared with a hat and/or sunscreen.) For us, it was a picture perfect day and we did a lot of just that — picture taking.

After touring the site, we stopped by the gift shop for souvenirs before walking west to Battery Park City. The promenade is one of the most peaceful spots in Manhattan even though it’s just a few minutes from One World Trade’s construction site. The temperature was warmer than expected (in the eighties) yet we needed our jackets as we approached the water to view the elegant Statue of Liberty. We sat on the promenade and relaxed for a few minutes before strolling along the water.

From there, we made our way back to the 1 train and rode north to Midtown to do a little shopping, but not before we had a quick snack of fresh sandwiches and coffee at Pret A Manger, which is by far some of the freshest prepared food in all of NYC. With locations throughout Midtown, you’ll never go wrong with any of their menu items, and all leftovers are donated each day to the homeless.

Now that we had energy, we made our way to Uniqlo, which happens to be one of my favorite stores for basics. I think Uniqlo quickly became one of their favorite stores as well. Amy and Whitney were impressed by the 89,000-square-foot flagship, considering the space constraints in Manhattan.

Amy had tickets to see Cinderella on Broadway that evening, so we strolled back to their hotel, taking in the sites along the way including shops like Saks and Cartier on Fifth Avenue, Radio City Music Hall, and City Center, one of the most beautiful theaters in all of New York.

I jumped on the train and headed Uptown to change and powder my nose for our late-night festivities. After the show finished about 9:30 pm, Michael and I met Amy and Whitney in Hell’s Kitchen at Luna Sur Latin Bistro for delicious tapas and live guitar music. We sat in a little outdoor space under the stars while we savored plate after plate and our bellies were full. We left the restaurant for a good night’s sleep before beginning the next day’s activities.


Day Two
We all met in the West Village and started the day off right with a delicious lunch at Good Restaurant. I loved the Peanut Chicken Salad (butter lettuce, radicchio, corn peanuts, and honey jalapeno dressing.) The Burger on Ciabatta was cooked to a perfect medium rare and the Green Chile Mac + Cheese with a tortilla crust was to die for. I’ve been to Good several times before, and this was by far the best food I’ve ever eaten there. It seemed as if they really stepped it up a notch.

With our appetites satisfied, we headed toward Michael’s job site, a nearby townhouse under construction, which we found both dusty and fascinating. Amy quickly decided that if she lived in New York, a townhouse in the Village would be her residence of choice. I quickly summarized Manhattan’s downtown real estate scene in one simple sentence, “It’s unaffordable unless you want to live in a closet.” I’m sure she will continue to dream like the rest of us.

We wandered around some of the most charming streets including Jane, West 12th, and Horatio. We couldn’t resist a quick window shop at Christian Louboutin, before we stumbled upon Jackson Square, one of the oldest parks in NYC. After a quick photo session, we continued walking east on 13th Street, one of the quaintest streets in all of downtown. 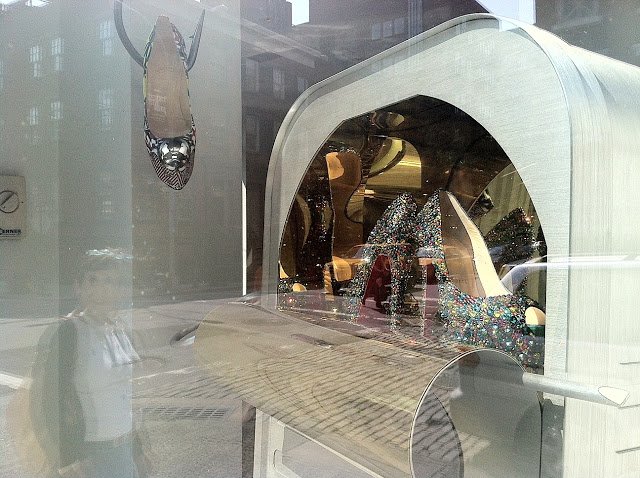 With plenty of bargains to be discovered, we had to stop by the secondhand shop, Beacon’s Closet, on 13th just off Fifth Avenue, where Amy and Whitney found former New Yorkers’ clothes to add to their Georgia wardrobes. We strolled south on Lower Fifth to Washington Square Park where we took in a little local music and the sites of Villagers in action on this 75-degree day. Whitney got a Henna tattoo, while Amy and I observed closely. She and I decided to pass on the body art, for now. There’s always next time!

We continued through the Village and wandered down Sullivan, another fave street of mine, only to end up on Bleecker, a quintessential downtown street. Walking west now on Bleecker toward Minetta Lane, Amy couldn’t resist one more fashion stop at American Apparel.

Trekking a little farther north to the train, we ducked into the subway to head uptown. Amy and Whitney experienced “train traffic” (where NYC subways stop and are delayed between stations because of another train in front) for the very first time. Now they were really living like New Yorkers!

Back to their hotel to change clothes, and back to the Upper West for me, our next plan to meet at Central Park for a carriage ride was quickly scratched due to an inaccurate weather forecast. It began thundering and raining despite the only cloudy prediction, and so we moved onto plan “B,”  which was dinner and music on Restaurant Row.

Michael and I met the girls on West 46th just off 8th Avenue. We thought we’d give Becco a try, the well-known Italian restaurant owned by Lidia Bastianich, and we were lucky enough to snag a table. Several hours, three courses, and two bottles of wine later, we were filled to the brim after indulging on Caesar Salad, Antipasto, Gnocchi in a Chive Cream Sauce, Grilled Salmon with Pan-Roasted Brussel Sprouts, Ribeye Steak with Mashed Potatoes and Broccoli, and Ricotta Cheesecake, the best cheesecake of my entire life, I might add.

Don’t Tell Mama was waiting for us just a few doors down, where we listed to standards and classics on the piano before grabbing a couple of cabs in the rain and calling it a night.


The following day, Amy and Whitney checked out, ate breakfast at Cafe Metro, followed by a stop at Bergdorf’s and Central Park, and finally a cab ride to the airport. Meanwhile, I spent all day catching up on the blog.


Have just a few days in New York City? This is how you do it!
And now — I need a vacation.