We met at French Roast on the Upper West Side. Of all Tuesdays, it was Mardi Gras. Neither of us wore our festive green, gold, and purple-colored beads, but our lack of baubles didn’t make our almost two-hour conversation any less amusing. We had snuck into the bistro at the ideal time and gabbed nonstop at a quiet and almost empty bar. Although this was our first meeting, I felt as if I had known him for decades.

I was thrilled to have a sit-down with author, actor, playwright, screenwriter, poet, storyteller and native New Yorker, Richard Vetere. We chatted about his career as a writer and actor, his new book, and of course, his life in New York City. Vignette after vignette, each more unimaginable than the next, the writer elaborated on a selection of only-in-New-York moments, all of which he clearly remembers like yesterday.

Here’s a handful of scenes from our conversation. Vetere’s latest novel, The Writers Afterlife will be released on March 12.

by Richard Vetere as told to Tracy Kaler

Not just another night at Caroline’s

In the mid-1980s, comedian Richard Belzer invited me to his opening at Caroline’s one night.  I arrived with my date on time, and though the place was packed, our table had five empty seats.  Sensing the packed house was getting antsy and blaming me since I was at the empty table, I went to look for Richard.  I couldn’t find him so I returned to my table, and this time I sensed an overwhelming hush in the house.

When I sat down, my date was white in shock.  “What’s up?” I asked her.  She could only nod to the previously empty seats.  I looked.  In the chairs were Al Pacino, Robert De Niro, Chris Walken, Harvey Keitel and John Hall of Hall and Oates.  I felt the entire room staring at me all night.  Though Richard was on stage, the entire room was looking at my table.

Bowie, Baryshnikov, Tyson and me

My friend Paulie Herman, who you know as Robert De Niro’s bookie friend in the movie Silver Linings Playbook, was managing a restaurant called “Columbus” on Columbus and 69th Street in the early ’90s that catered to celebrities, and it became my hangout for the decade of the ’90s.  He called me one night saying he’d be late and needed me to entertain some of his friends at his main table.  I did as he asked, and when I got there, Mikhail Baryshnikov stepped in and sat with me, and asked for Paulie.  A few minutes later, David Bowie came in and sat with us.  Neither man spoke to the other as I tried to make small talk.

A few minutes later Mike Tyson walked in with his lady friend and she immediately recognized Bowie and Baryshnikov, but Tyson had no idea who they were.  When I told him, he still had no idea.  They all hung out in silence and eventually left since Paulie never showed up.

Lunch and Dinner with Tony Bennett

Thanks to Sonny Grosso, I was invited to a small dinner party at Manducatis in Long Island City, and Tony Bennett was seated next to me.  My screenplay adaptation of my play How to Go Out on a Date in Queens was just filmed, starring Ron Pearlman and Jason Alexander, and they were trying to get the rights to a beautiful song Tony has sung.  I had asked Tony and he said, “No problem, just contact me.”  I told the director/producer who was flying into NYC.

She and I had lunch with an interview I set up for her with Denis Hamill of the Daily News, and we stated how we needed to contact Tony about the rights to the song. “He’s sitting right over there,” Denis told us.  And there he was. Tony was having lunch, having just opened the Frank Sinatra Music School in Long Island City.  So we went over to him. Only in NYC.

In 2013, when brilliant producer Phil Ramone died, his family held a memorial in his honor.  I was one
of 2,500 guests invited to the event and fortunate to be seated up front. Quincy Jones, Phil’s friend hosted.  He spoke about Phil and then invited Billy Joel on stage. Billy told the story how Phil changed his life and career and sang two songs.  Billy Joel then introduced Tony Bennett who sang “Fly Me to the Moon” a cappella.  Tony introduced Paul Simon who sang two songs, who then introduced Kevin Spacey who sang two songs, and he in turn introduced Josh Groban who brought tears to my eyes with “Smile.”

Before The Writers Afterlife
In January 2013, I was asked through Facebook by Peter Carlaftes and Kat Georges of Three Rooms Press to read Charles Bukowski’s poetry at Cornelia Street with several other writers.  After the reading, Peter said to me, he’d like to be in business with me.  I sent him The Writers Afterlife which I had just completed, and the rest is New York City history. 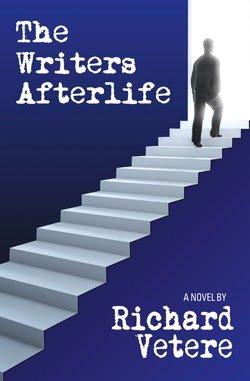 The Writers Afterlife tells the story of New York writer Tom Chillo, who dies prematurely at age 44 and transitions to a place where writers go after their deaths. He finds that even great writers like Tolstoy, Keats, and Shakespeare, regret never achieving fame while still alive. The book is a humorous yet poignant look at the writer’s struggles, his quest for love, and a second chance to achieve the success that’s he’s always dreamt of.

You can order The Writers Afterlife on Amazon.com.

« Janet Silverman Gets Lame in Winter
Wake up with Poncho: Personal Weather Delivered to Your Inbox Daily »