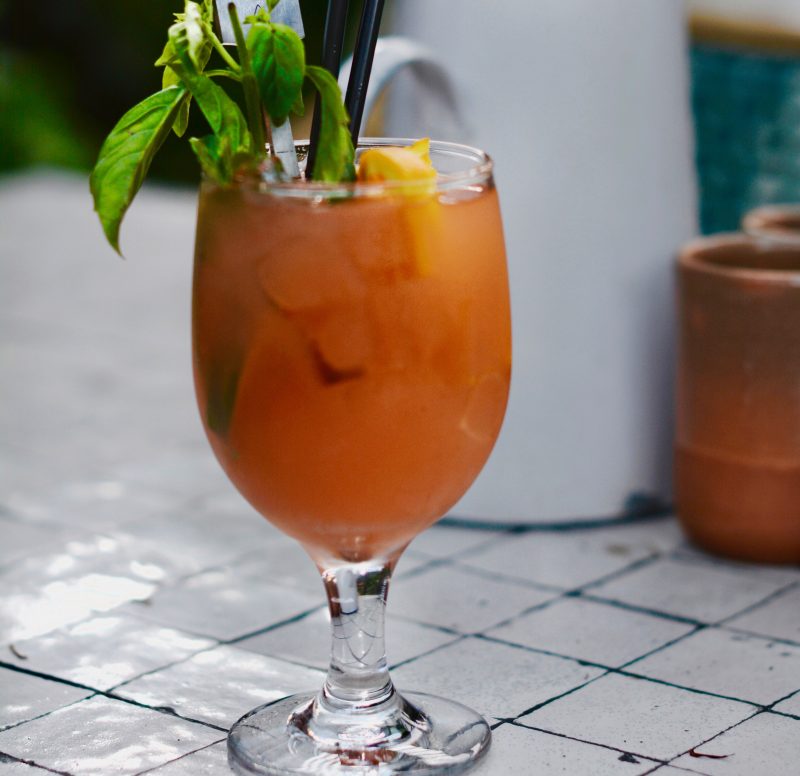 Whether you’re remedying last night’s antics with a little hair of the dog that bit you or just want to enjoy a savory drink, the Bloody Mary is the choice cocktail among brunch enthusiasts. While the origin of the tomato juice and vodka concoction is cloudy, one story traces it back to Fernand Petiot, a Parisian bartender who claimed to have invented the Bloody Mary in 1921. Over the years, iterations of the original recipe with bacon, peppers, and even sausage have been introduced. That said, there’s a variety of Bloody Marys mixed right here in New York. Here’s where to find the best Bloody Marys in NYC.

Named after two champion racehorses, Saxon + Parole stands alone on the list with its DIY Bloody Mary Bar. Starting with the base of vodka mixed with a freshly squeezed signature juice blend, you season and garnish the drink to your liking. Additional inspired options include the Bloody Caesar with house-infused aquavit, clamato juice, dill, coriander, salt and a freshly shucked oyster, and the Bloody Maria with Altos Blanco, fresh vegetable juice, chipotle, cilantro, and mescal float. 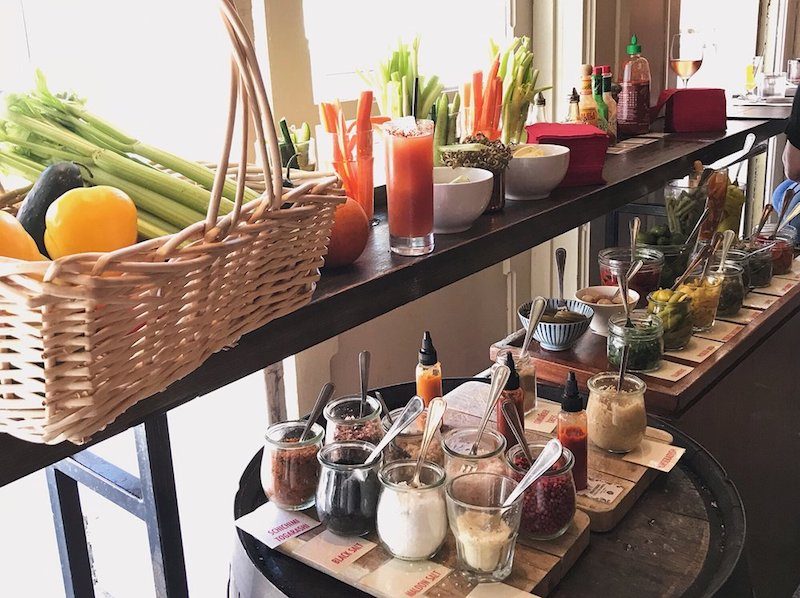 Nestled in SoHo, Sadelle’s offers a menu with a focus on fish and American classics. Known for its traditional Russian caviar and vodka service, the restaurant has a whole selection of house-infused versions of the crisp, clear spirit. What makes Sadelle’s Bloody Mary so good is that it adds pickle juice to the standard tomato juice, horseradish, and salt, and pepper base. We don’t feel so guilty about drinking this one. Garnished with celery, cornichons, and cherry tomatoes, it provides a full serving of veggies.

This list would not be complete without mentioning Prune. The East Village restaurant serves up eleven different recipes, so surely one of the best Bloody Marys in NYC can be had here. Suit all your boozy brunch cravings with standouts like the Danish made with aquavit, fresh fennel, and marinated white anchovy; the Green Lake made with Tito’s vodka, wasabi, and garnished with a beef jerky swizzler; and the Chicago Matchbox made with homemade lemon vodka, pickled Brussels sprouts, baby white turnips, caper berries, green beans, and radishes. 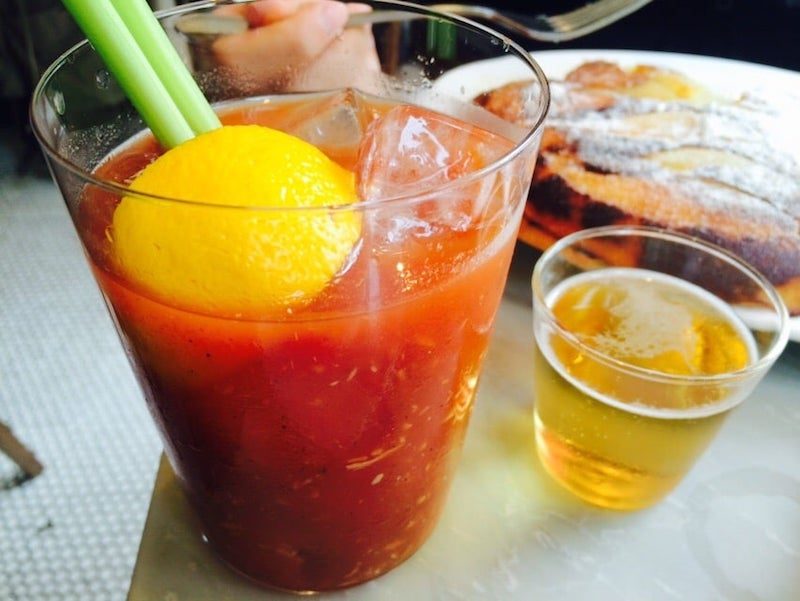 Located in the West Village, Bar Sardine is a gastropub serving up tasty all-American fare in a cozy setting. Among the entire menu dedicated to the brunch cocktail favorite, the Green (Bay) Bloody Mary stands out. Juice made with tomatillo, cucumber, and house serrano hot sauce gives this drink an alluring green hue. For alcohol, you can play it safe with classic vodka or zest things up with dill or green chili-infused vodka.

The Wren pays homage to American and British Pub food with hearty, mouthwatering dishes such as fish and chips, potato croquettes, and Brussels sprouts prepared with honey mustard and bacon lardons. Known for spinning the classics, the bar composed a brunch drink menu that is original, varied, and full of tempting libations to wash down your full Irish breakfast. Bloody Mary-inspired drinks include The Weekender made with Tito’s vodka, tomato juice, McClure’s pickle brine, horseradish, and Valentina Hot Sauce, and the Good Old Boy made with bacon-infused Jim Beam Bourbon, brown sugar, HP Sauce, tomato, smoked salt and garnished with a thick cut of bacon! 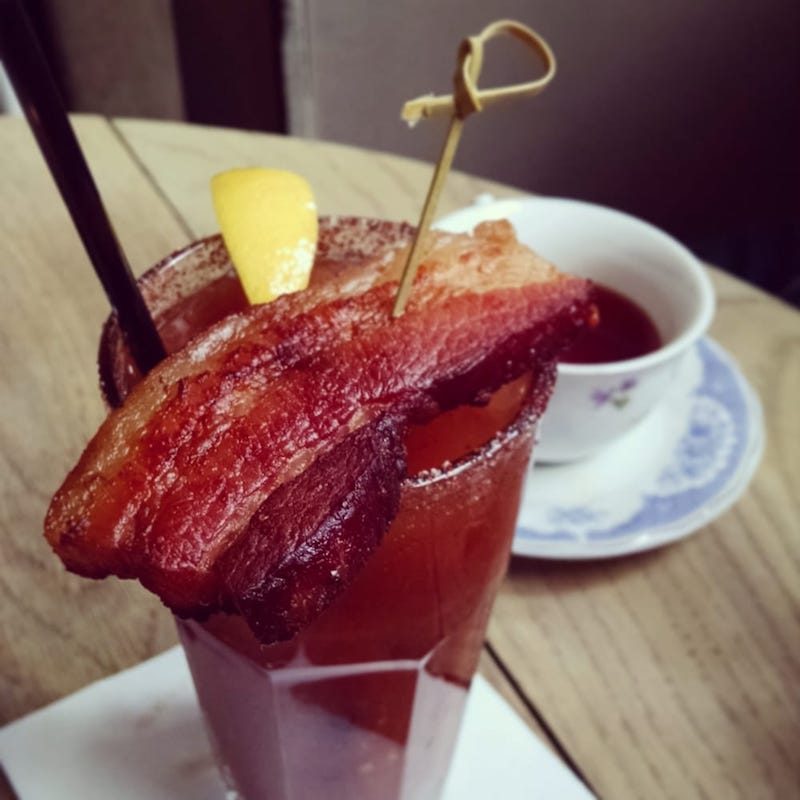 Where do you go for a hangover cure? Share your pick for the best Bloody Mary in NYC!

Also, let’s talk martinis, cheap drinks, and classic New York-inspired cocktails and where to find them.

The Wren photo by Jesse and Christy S. via Yelp.