Where to eat the best doughnuts in NYC

No breakfast pastry makes us more nostalgic about our childhood than the doughnut. But somewhere along the way, they got a bad rap and became unhealthy. Not buying into this notion, mom-and-pop bakeries stood their ground and continued filling racks with powdery, glazed, and jelly-filled delights. Today, top pastry chefs are using the doughnut as their muse, introducing new and never-before-imagined flavors. Craving a doughnut now? From classic staples to modern inventions, here is where you can find the best doughnuts in NYC.

Located in Greenpoint, this neighborhood bakery has been making some of the best doughnuts in NYC for more than 60 years. Husband and wife owners Donna and Christos Siafakas bought Peter Pan Bakery thirty years ago and have worked hard to maintain the look and feel of the original. Doors open at 4:30 a.m. when sleepy-eyed patrons arrive for their coffee and pastry fix served up by uniform-clad waitresses. Twenty different varieties of donuts fill rack after rack. You can expect classics like the cruller, chocolate frosting with sprinkles, sugar raised, and sour cream.

If the vibrant décor at this doughnut den is any indication of its product, then we are in for a tasty, colorful treat! Doughnut Project is on a whole different level when it comes to putting an original spin on the classic. Mind-blowing flavors include “Those Beets Are Dope” with beet glaze filled with ricotta whip (winner of the 2016 DonutFest), “PBJ 2.0” with blackberry glaze and peanut butter whip filling and a touch of house blackberry jam, and “The Bronx ” with simple glaze and a touch of Italian olive oil and black pepper.

Chris Hollowell and Dan Dunbar channeled their passion for vegan cooking and gifted us with Dun-Well Doughnuts. While everything is vegan, nothing is missing regarding taste and texture here. Quite the opposite actually, and the flavors are as inventive as ever! The menu changes daily – past mouthwatering offerings include salted caramel pretzel, blueberry French toast, lemon ginger cookie, chocolate raspberry, and Boston cream. 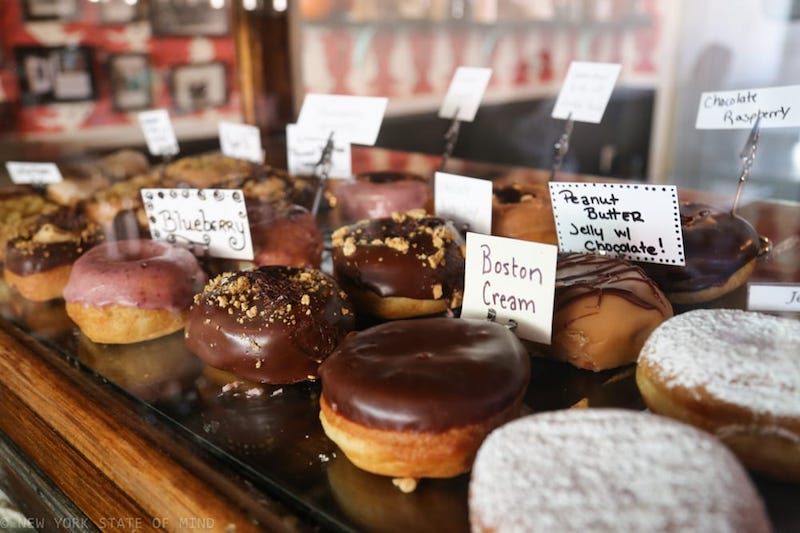 Du’s Donuts and Coffee is a modern, airy café located in The William Vale hotel. Established chef Wylie Dufresne put in some serious homework to fully understand the baking science behind the donut. He’s blended new and familiar ingredients in his donut recipes to create a daily menu that is anything but ordinary. Imaginative flavors include brown butter key lime, creamsicle, peanut butter yuzu cinnamon and apple, and chocolate and caramel brownie.

What sets Dough apart from the rest of the doughnut shops is, well, it’s dough. It uses a brioche type, yeasted dough, which inflates the doughnut’s fluffiness to a whole new level. The menu offers a delicious selection of flavors from chef Fany Gerson, and the doughnuts are made in small batches throughout the day to guarantee freshness. Highlights include dulce de leche with almonds, chocolate cocoa nib, chocolate stout, and chai cream. Cake doughnut fans, Dough has a whole separate menu for you too.

Also, if your sweet tooth is calling, try these sugary treats. And the best cheesecake in New York! Plus, everyone should visit this Brooklyn bakery.