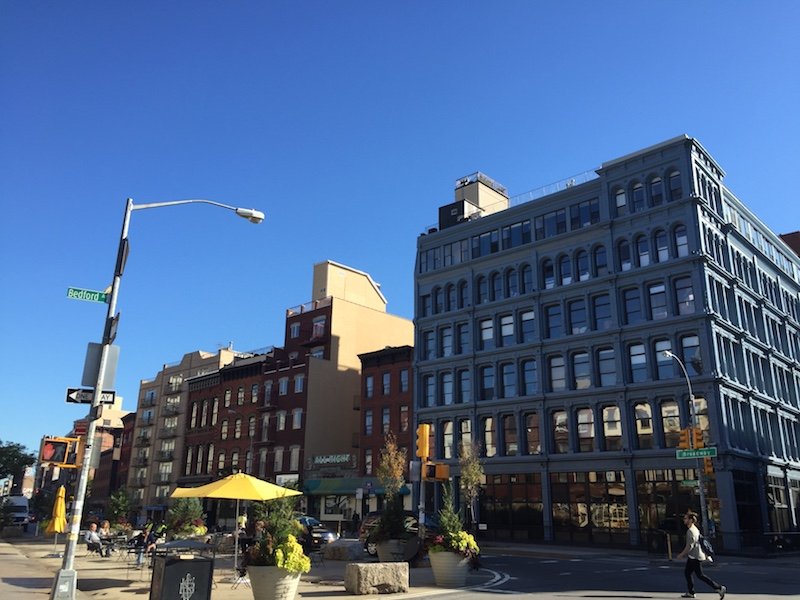 Sure, NYC is home to some of the world’s finest art museums. But one of the great things about this city is that you don’t have to step into a white-wall gallery to see art. New York’s streets pulsate with work by some of today’s most exciting artists. Williamsburg, Brooklyn is a hot spot for these artists whose backgrounds are often rooted in street art. Their paintings cover sides of brick and cement buildings, offering an insightful look at contemporary art’s freshest trends, unique world cultures, as well as current political and social issues. Here’s where to see the best street art in Williamsburg.

Head to these spots to see the best street art in Williamsburg.

At the corner of Bedford Ave. and N. 9th St., you’ll find a mural depicting Jean-Michel Basquiat and Andy Warhol by Brazilian street artist Eduardo Kobra. Recognized for his kaleidoscope designs enlivened with vibrant colors, Kobra based his piece on photographer Michael Halsband’s famous image that shows 1980s superstars Warhol and Basquiat wearing boxing gloves with raised arms in a criss-cross. Here, Kobra is addressing every artist’s right to creative expression, punctuating his message with the hashtag Fight For Street Art. 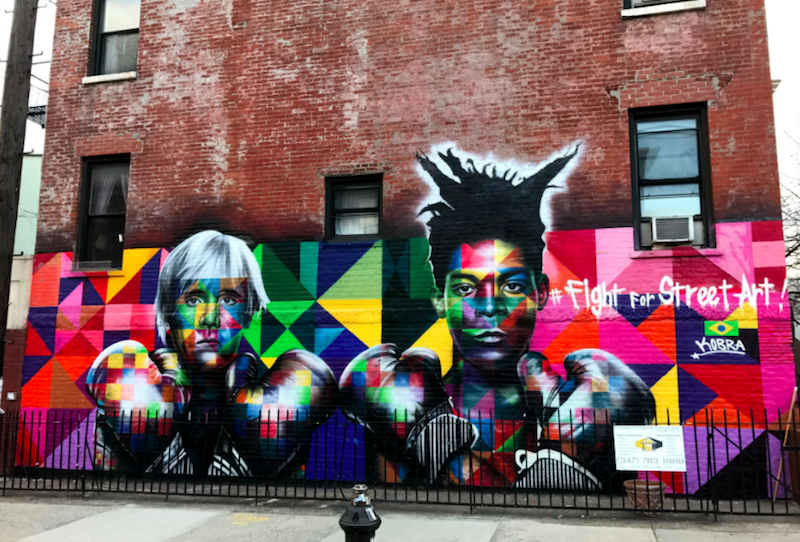 Belgian street artist ROA is known for his captivating imagery of animals, which he paints on urban surfaces all over the world. He has some great pieces peppered throughout Williamsburg and Bushwick, including the gigantic totem of sleeping rodents on the side of Muchmore’s, located at the corner of Havemeyer Street and North 9th Street. Rendered in black and white with exquisite detail, they look like they could open their eyes at any minute and spring from the building. 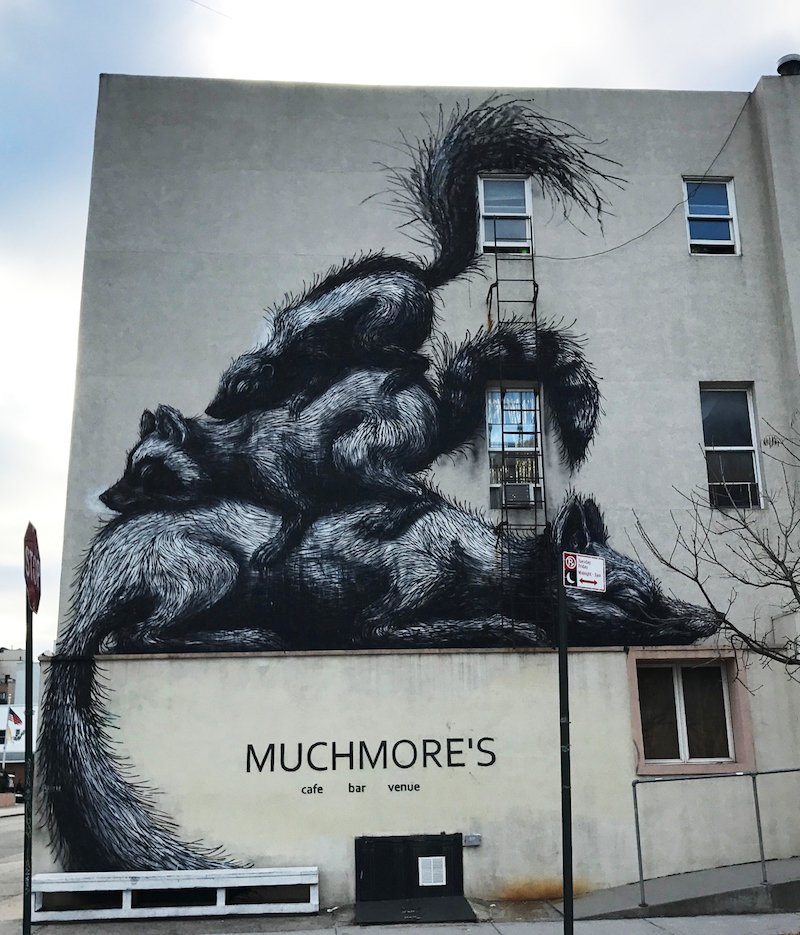 Once viewed as underground and anti-establishment, the graffiti and street art movement has been picked up by mainstream culture in recent years. This fact was keenly observed in the Banksy-produced, Academy Award-nominated documentary Exit Through the Gift Shop. You can see a mural by Mr. Brainwash, the film’s central character on 250N10, a luxury apartment building. Covering an entire façade on Roebling St., the piece exhibits Mr. Brainwash’s signature Pop Art aesthetic with comic book heroes, Warholian soup cans, and his motto “Life is Beautiful.” Look closer, and you’ll see portraits of John Augustus Roebling, a groundbreaking architect and designer of the Brooklyn Bridge, and his son, Charles Roebling. 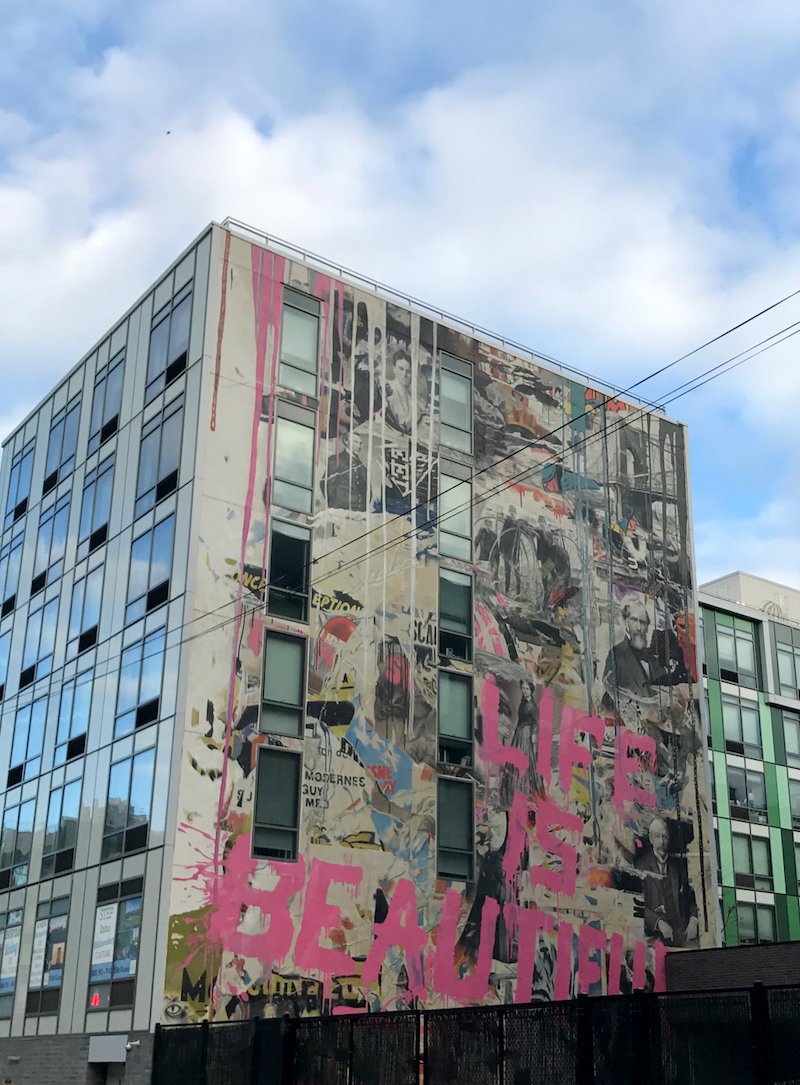 Rappaport Sons Bottle Co. is a fourth-generation business in operation since 1939. In 2012, Mr. Rappaport granted a group of artists permission to paint on the side of his building. Today, his business doubles as a mural gallery representing street art’s dynamic composition. Here, you’ll see amazing pieces by female artists Cake, Gilf, and Sophia Maldonado, Iranian brothers Icy and Sot, Ecuadorian artist LNY, alongside work by local artists Joey Iurato and Veng. 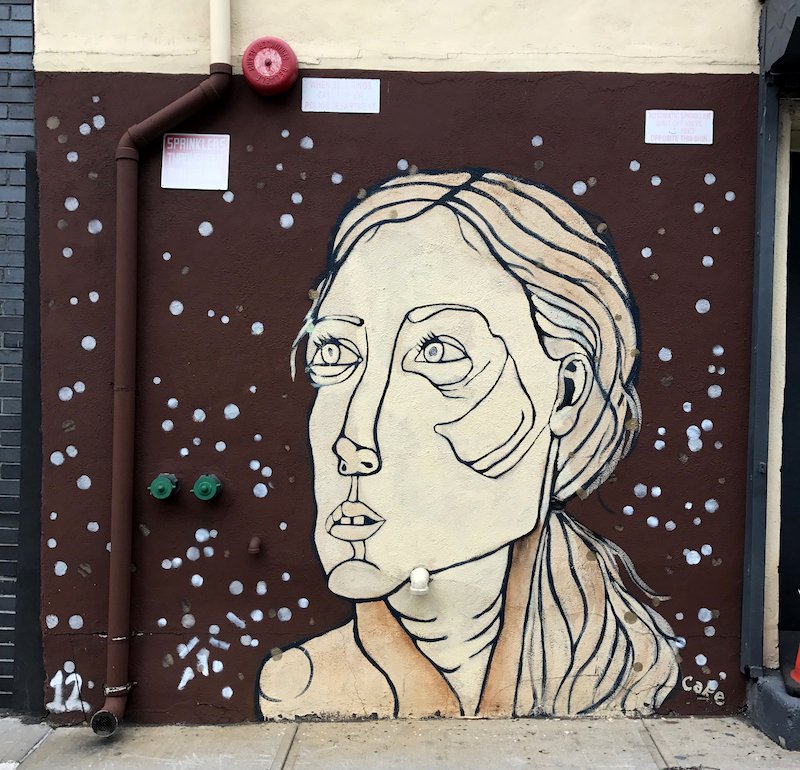 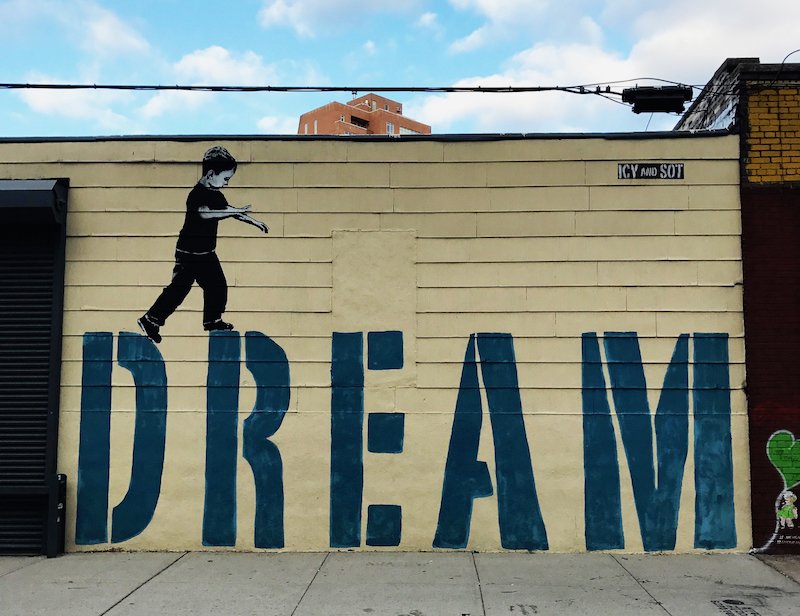 Williamsburg draws street artists from all over the globe. In Summer 2015, South African street artist Faith47 created an emotionally powerful mural titled “Lay Your Weapons Down.” Rendered in a simple, muted palette, the piece shows two figures in an embrace. It is both provocative and comforting, and expresses Faith47’s message about race, the importance of human connection, fragility, and strength to overcome violence. 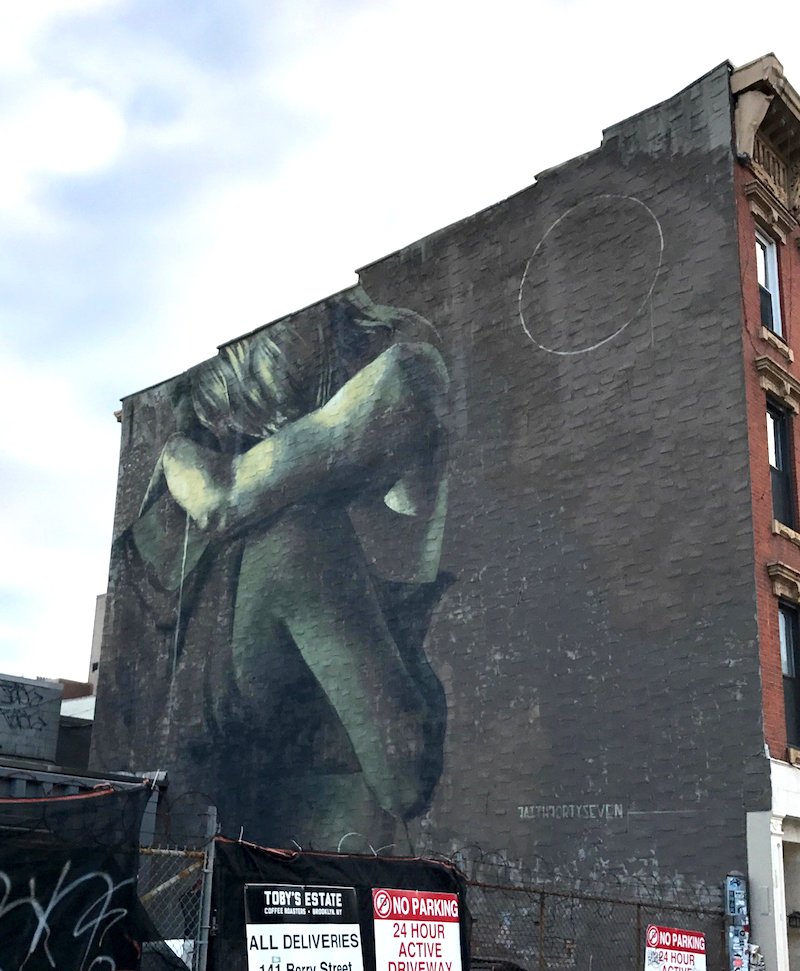 Also, Hunts Point street art, and remember 5 Pointz? And catch this interview with one of New York’s most celebrated street artists.