Buffalo Heights, by Adam Harrell, is the first original work to be performed by TIC, Tongue in Cheek Theater Productions, a company that recently celebrated its eighth season. Jake Lipman serves as the Producing Artistic Director, in addition to being the star and director of Buffalo Heights.  While it is usually ill-advised for one person to wear so many hats in theatre, Lipman manages to succeed in all areas.

Buffalo Heights slightly mirrors the plot of the 1999 movie, Election.  The play centers around Fran (Lipman), the new French teacher at Buffalo Heights High School.  She has come to replace Miss Danville who mysteriously disappeared after a nervous breakdown. When Fran runs into problems with star student, Piper Matthews, Principal Jean advises Fran to keep quiet, as Piper is the daughter of a prominent Congresswoman.  Fran ignores the warnings and instead allies herself with Conner Smith, the school stoner, working closely with him in his campaign against Piper for Class President.  Ugly rumors fly regarding Fran and Conner’s relationship, and a witch hunt ensues leaving Fran at the mercy of the media-hungry vultures.

While billed as a comedy, the play has some inconsistency in tone.  On one hand, Buffalo Heights is starkly realistic, conveying the message of the danger of rumors in school systems and the politics that get in the way of uncovering the truth.  On the other hand, it is an absurdist comedy.  At one point, Stumpy the school buffalo statue comes to life and offers sage advice during a dream sequence.

While the comedy is a welcome relief from watching Fran unjustly lose everything she has worked for, the absurdist humor weakens the play’s message instead of strengthening it.

The tone inconsistency even mirrors in the characters: Principal Joan, Mike Hobbes (an over eager, dim-witted security guard) and Piper come off as caricatures, while everyone else remains grounded in three-dimensional reality.  That is not a fault, however, of the actors.

TIC has a talented ensemble cast. Shelley Little (Principal Joan) is a great comedienne, reminiscent of a young Shelley Duvall.  Joe Mullen (Mike Hobbes) is a dynamic presence who would fare well in TV shows like Reno 911.  Allison Lemell (Piper) is appropriately scary as the phony girl you love to hate, while a convincing Nina Leese as the Congresswoman is so business oriented that she blinds herself to her own daughter’s devious behavior.

The simple scenic design by Michael Lounsbery consists of a boldly painted wall, a table, and two chairs.  The backdrop is a bit too minimalist to give a clear picture of all the locations, but Philip Rothman’s sound effects –– ringing school bells and assembly applause –– help set the scene.

With an ensemble of talent and a wealth of resources at its fingertips, TIC should continue to commission new and entertaining work, even if that new work turns out to be somewhat quirky.

Buffalo Heights can be best summed up by Principal Joan’s description of the cafeteria meatballs: “They’re factory irregulars.  I think they’re delicious. Who cares if they’re not perfectly round?” 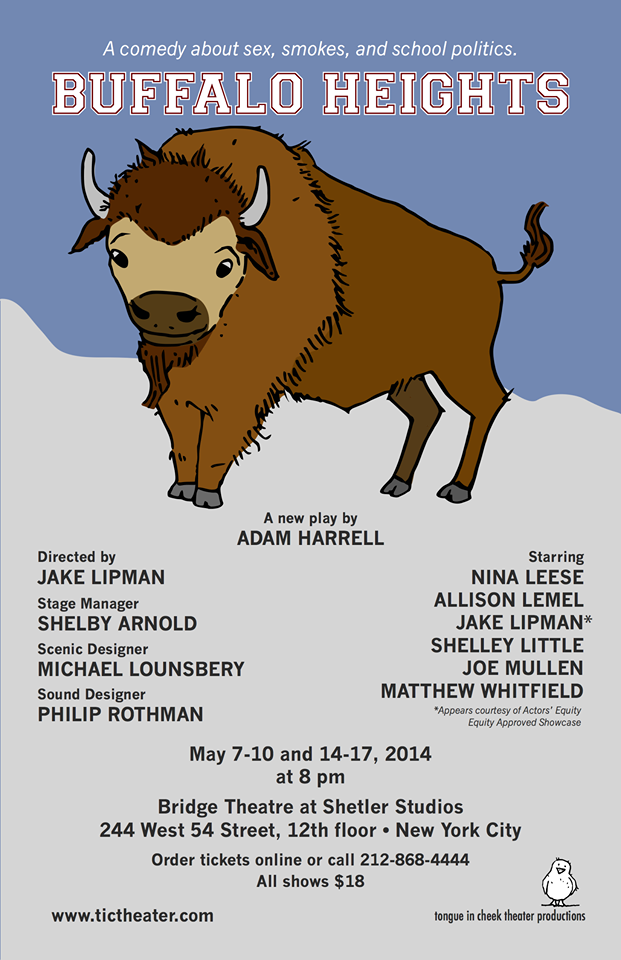