Whether you’re a native New Yorker or a French expat, celebrate Bastille Day in New York City and commemorate the anniversary of France’s independence. With a host of events and Frenchness all over town, you can’t escape this week-long, citywide fête, and why would you want to? Vive la France!

2. Attend the Bastille Day Ball…
On Friday, July 11, Francophiles will dance the night away at Bal de la Fête Nationale at 404. “Bleu” tickets cost just $30 ($35 at the door) for general admission, and include passed hors d’oeuvres with a cash bar. “Rouge” tickets price at $120 ($135 at the door) come with red carpet treatment, seating in the VIP lounge, a gourmet buffet dinner, and open bar until 10:30 p.m. Must be over 21 to enter. Try your luck at the raffle, and you might win two round trip tickets from NYC to Paris on Air France. 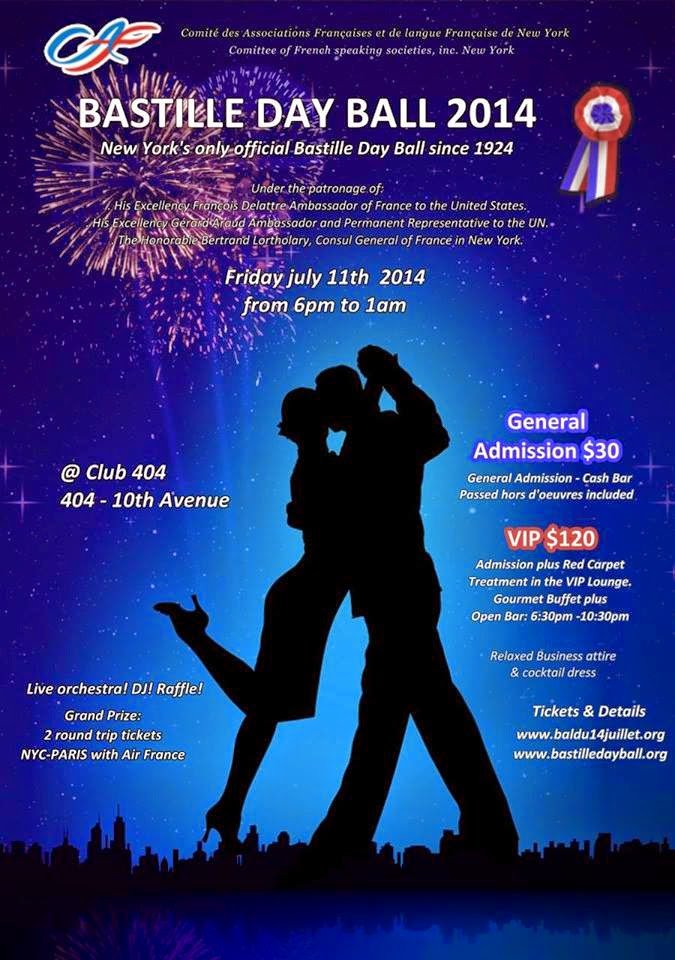 3. Play Pétanque, the French game of boules…
Eat, drink, be merry, and join the competition outside Tribeca’s Cercle Rouge from 12 p.m. until 9 p.m. on Friday, July 11. The West Broadway lineup includes a live band, French street food such as lamb sausage, French fries, and Parisian ham on a baguette, and 12 sandy, regulation size Pétanque courts with 28 competing teams. After the street fair ends, move inside to continue the Parisian party into the wee hours.

Feeling French yet? If not, venture to Smith Street in Brooklyn on Sunday, July 13, for brunch a la Francaise and an even larger Pétanque tournament at Bar Tabac beginning at 11:30 a.m. This location will feature 16 courts and 64 teams.

Note: If your three-person team wants to take a shot at the game, you must register at the location where you plan to compete –– either at Cercle Rouge or Bar Tabac. You can bring your own Pétanque balls or purchase a six-pack for $50 at the tournament. There is a $45 team fee to compete.

Bonus: The winning team from each location will land roundtrip airline tickets to Marseille, France, courtesy of XL Airways France.

Okay, here’s the real bonus: You can watch the final World Cup game on a large outdoor screen during the festival while you sip Ricard and Lillet. Sons parfait!

Embrace the day’s festivities which will include a regale of specialty foods from Dominique Ansel Bakery, Épicerie Boulud, Francois Payard Bakery, Financier Patisserie, and other French eateries. Thirsty? Taste 25 wines at the Grand Vins Tour de Franc, led by the city’s best sommeliers and wine pros.

Travel miles away and pretend you’re in Paris as you listen to Domitille and Amaury de Crayencour croon classic French songs. Watch the high kicks of animated can-can dancers à la Gaîté Parisienne-style. Or, grab a glass of Beaujolais and people watch. Bastille Day on 60th Street promises a fun-filled Sunday for the entire family with children’s activities, French workshops, a prize drawing, and more.

5. Eat and drink French at home…
If you prefer a more quiet Bastille jubilee, organize your own –– at home. Get in the kitchen and cook for yourself, family, or friends. Shop for wine selections at Appellation Wine & Spirits, Millesima, or Astor Wines & Spirits, which stocks a selection of French bottles for less than $15. Serve Quiche Lorraine and Salad Nicoise for brunch; Coq au vin or Moules Marinierès for dinner. Listen to French classics like “La Vie en Rose,” “La Mer,” and “Je t’aime moi non plus” on Paris Chanson, and sing along if you must! What could possibly be more French?

« The Best Of: Raw Fun at NYC’s Iron Horse
9 Things I Can’t Live Without This Summer »