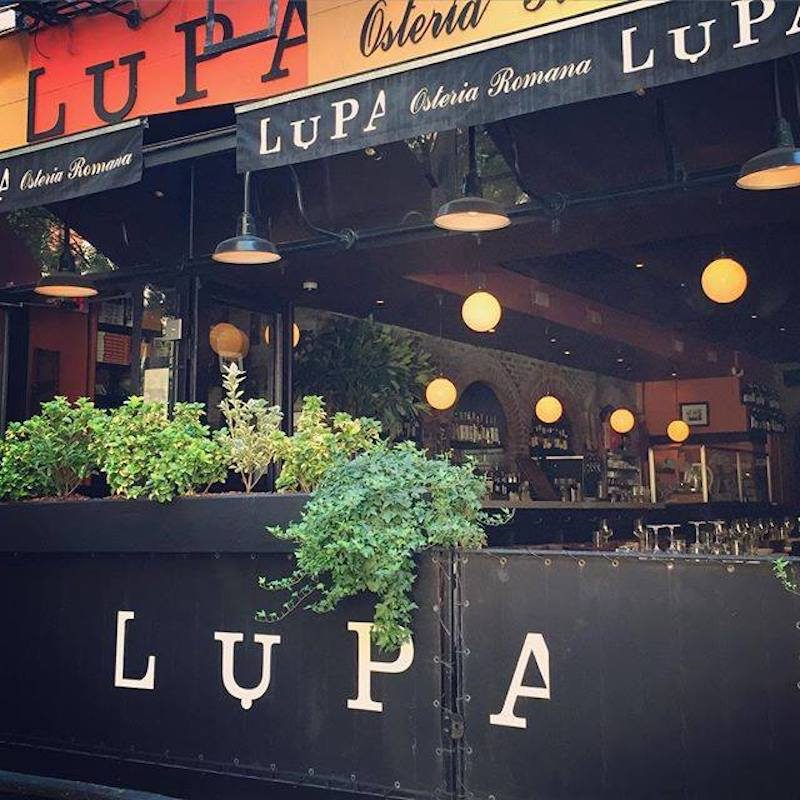 The pasta. The wine. The service. It was exceptional. Little did I know, but had I eaten dinner at celebrity chef Mario Batali’s restaurant, Lupa. Years later, I realized where I had been.
It was summertime. We strolled around Greenwich Village aimlessly for several hours. Anyone who has been to the Village can understand how easy it is to lose track of time in this neighborhood. We found a tiny restaurant (I couldn’t tell you where it was, but I know that it has since closed), drank a few glasses of wine, and then moved on to the next destination, which was dinner.

Wandering down one charming street after another, we found plenty of choices, but Thompson Street had one jam-packed place that piqued my curiosity. I loved the looks of it. Not too big, open air, and bustling with what looked like locals. We knew soon after we’d entered that the restaurant was Italian. We also knew we would wait hours for a table, and the bar wasn’t terribly big so we had little standing room. My husband worked his southern charm with the host, and we had our fingers crossed that our wait wouldn’t be too long. We managed to grab two seats at the bar and two quartinos of wine, and minutes later, we landed a table. Occasionally, southern drawls come in handy.

We split several courses as we always do: an appetizer, a pasta, a fish of the day, and of course, dessert. Each plate was more delicious than the one before, and we were oohing and aahing throughout our meal. The wine was also reasonably priced and exceptional. The service was some of the best we’d ever had. All we could say was, “Wow! If this is what restaurants are like in Greenwich Village, we are going to eat here every time we visit New York City.”

After we returned to Atlanta, we couldn’t stop talking about our experience at Lupa. I, of course, kept craving that fresh Italian food and knew that I would never find anything close in Georgia. I’d continue to hope that one day, if I thought about it long and hard enough, and fate was on my side, I could eat at Lupa anytime I wanted.

A few weeks after the trip, I was watching the Food Network while eating lunch in my kitchen. I absolutely loved the show, Molto Mario, and rarely missed an episode.  I loved his sense of humor and energy. I knew nothing about this guy, Mario, but he was quite the character. How cool to be a guest on his show, sit around the counter, and eat his food as he’s cooking?! So I thought, maybe he’s an up-and-coming chef? I had no idea who he was.

Fast forward a few years later after I moved to New York.  Since living in NYC, I follow the food scene as closely as I can and I’m fairly informed when it comes to New York chefs. But in 2003, I was living in my own little Atlanta world, decorating and renovating, and well –– dreaming of being in Manhattan. At the end of the show, the credits ran and I saw the list, which I’d never noticed before. All of Mario Batali’s restaurants were located in New York City, and one was Lupa!  Silly me. I was a fan before I even knew I was a fan.

Several years passed from that night in the Village, and we moved to Manhattan. One of our first meals was at Lupa. I remember that night in 2007 like it was just last week. How fantastic it felt to be eating there and going home to our apartment, instead of a hotel. My wish came true.

Now, I can eat at Lupa anytime I want, but I need to plan ahead because even all these years later, a table is tough to get.

Mike and I have gone back to Lupa on many occasions. We always remember that first time and how special it was –– from stumbling upon the restaurant to trying to land a table, to waiting a short time at the bar, to the magnificent meal and stellar service.

I haven’t been to Lupa in months. I think of it often, like an old friend. I crave the red beets with pistachios and the bavette cacio e pepe, but mostly, I crave the experience. It’s time to go back.