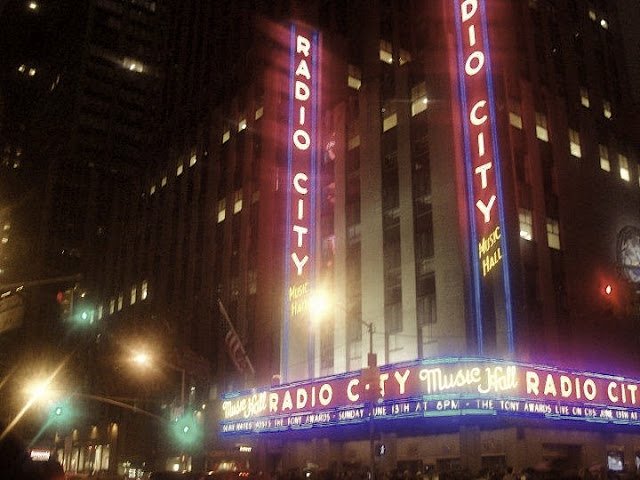 Auditions. How I hated them. That’s pretty good proof that being a professional stage performer wasn’t my calling. Performers spend hours of their lives auditioning. Watching the new hit television show SMASH brings back a painful memory of mine.

It was circa 1985, and Radio City Music Hall was the place. I commuted for the day from Pennsylvania, and spent hours in studios at the theater, trying to get a part –– any part. This wasn’t performing for the world-renowned Rockettes, but for another dancing role in the “ensemble,” as it is called now.  It used to be the “chorus,” but somewhere between the 1980s and 2012, that became a less-than-desirable term.

The requirements were a classical ballet background, which I most definitely had.  I learned combination after combination during a not-so-organized audition, and it included pointe work. By mid-afternoon, my toes were throbbing and enough was enough. I had been to auditions before, but nothing like this one. It honestly felt like torture. Cut me or cast me already!

Finally, it was the end of the day (or should have been), and the director made an announcement. The parts that needed casting were for the dancing bears in the Christmas Spectacular. I think my head spun around 360 degrees and I began hyperventilating. After hours of tour jetes and pique turns, I found out that this audition is for an animal role? I would have considered the ensemble part, but dressed as a human for crying out loud. No one would recognize me dancing in a bear costume, and I couldn’t imagine how hot or uncomfortable I would be underneath all of the fur and padding. Plus, dancers struggle to maintain a perfect physique. What was the point? Years of sacrificing those Tastycakes didn’t matter one bit.

And so, I gathered my dance bag and I hastily left the audition. I exited the studio quickly and I ran from door to door, trying to find an escape. Radio City Music Hall is a mighty big place, and had hundreds of doors, but none of them led to the street.  Moreover, the backstage of this theater was like a maze, and I couldn’t get out.

Meanwhile, thirty minutes later I opened another door, and was, at last, in the actual theater –– what a magnificent yet scary place when alone. I was star-struck in a way, but also desperately needed to get outside. I had been to RCMH before, but with a packed audience. This was a first, and I can honestly say I preferred the crowd. After trying all of the main doors, which were locked, I found one other door that was open, and I escaped to a cold, rainy, Midtown Manhattan street.

Becoming a Rockette or performing at RCMH never made it to my resume, but I can honestly say that I danced in Radio City; I’ve been backstage, onstage, in the studios, and also lost in the theater (but not by choice).

That was my first and last tryout for a professional job in New York. If a dancing bear was the big time for me, then I would rather not be dancing. I didn’t love it enough. I think I cried for three hours on the Bieber Bus back to Pennsylvania, but I knew that I had made the right decision. I didn’t regret leaving that audition.

Just a few years ago, I returned to Radio City with my mother to see the Christmas Spectacular. When the dancing bears came on stage, mom and I looked at each other and we couldn’t help but laugh. Twenty-five years later, I still knew that I had made the right decision in 1985. For me, it was best to leave the bear-dancing to others.

« Bethenny is Back!
Joe’s Pub and Taylor Mac: A Match Made in Heaven »