I was thrilled when design pro Dennis Miller agreed to a personal interview. Miller’s name is one that New York designers and architects widely recognize. Since 1984, he’s brought contemporary, innovative furniture and accessories to the NYC market, furnishing luxuriant design projects and doing so in style.

His namesake showroom –– Dennis Miller Associates –– is located in the New York Design Center at 200 Lexington. The 5,000-square-foot space showcases high-end furniture, lighting, and accoutrements from more than a dozen artists and designers, and is an essential resource for many well-known names in New York’s interior design world.


Miller is an architect and designer himself, and beyond daily life at his elegant Murray Hill showroom, he stays busy with residential design projects. Currently on the books are a Manhattan apartment and an oceanside vacation home in Florida. 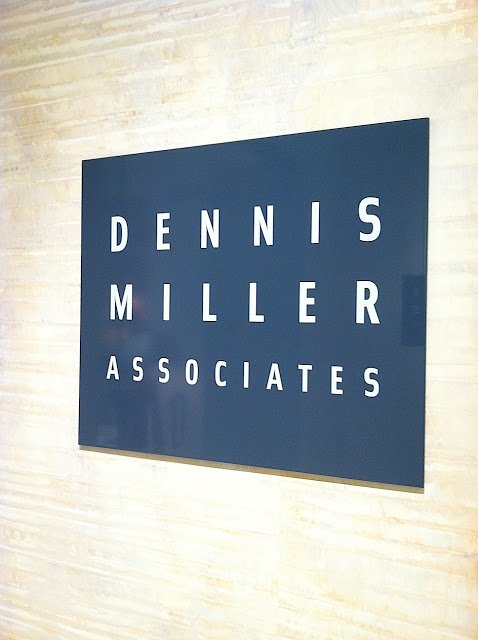 Where did you grow up and how did your upbringing influence your career?

I grew up in Long Island in a perfect suburban modern house. My parents’ decision to build a new house when I was 14 encouraged me to draw plan after plan of houses they would want, because I was convinced they would choose one of my designs.  They didn’t. But what they did get was a fantastic modern Frank Lloyd Wright-influenced design, which perfectly addressed their wishes. I was very impressed. It probably cemented my desire to become an architect. I went to school there, and then the College of Architecture, Art and Planning at Cornell University.

When did you move to New York City and why?

I was born in NYC and moved to Long Island at one year old. I moved back to NYC after getting my Masters Degree [in Architecture] and living in Switzerland for a year.  New York was obviously the place to start a career in architecture, and family was here.  Everyone wanted to live in New York in the ’70s!


Where did you live when you arrived in the 1970s?


I moved to Irving Place, having become familiar with the Union Square/Gramercy area after a semester in New York during architecture school.  It was the best gift Cornell gave its students – classes in the city, and meeting artists (Robert Indiana, Andy Warhol), architects, and hanging out (at Max’s Kansas City).

How did Dennis Miller showroom happen?


In 1984, after having worked in architecture offices and a bit on my own, I thought I should try something different.  Since I had  become familiar with craft design of furniture and also with art furniture, I started with a show of “art” furniture for the trade.  Artists and craftspeople would take commissions from interior designers and architects – it was a great synergistic combination of creative talents.  Eventually this launched the need for a permanent showroom space, and the inclusion of many more designers and fabricators, with full product lines.

Do you design some of the showroom furniture or is it from other designers?

It’s all by other designers.  I collaborate from time to time with them on the type of product, or the materials, or the aesthetics, and always the price.  I like living and dead artists, (sometimes the dead ones are harder to deal with).

Which furniture designers have you worked with?


We work to create products with licensing arrangements (Morris Lapidus, Clodagh, TH Robsjohn-Gibbings, David Rockwell), and also with national brands for distribution for the local market (Jiun Ho, Wendell Castle, Altura, Antoine Proulx, Fuse Lighting among others). Of particular interest is to foster the career of emerging furniture artists such as Peter Sandback and Matthew Fairbank.


How would you describe the style of furniture in Dennis Miller Associates?

I would like to call it contemporary, which of course it is, since it’s made now.  The aesthetic is particularly American (as opposed to European).  I like to think it mixes with antiques as well as modern furniture.

Which architects or designers have influenced you the most?

I was schooled in the influence of Le Corbusier, but of course was familiar with Mies, [van der Rohe] [Louis] Kahn, [Eero] Saarinen.  All of them were heroes.  In furniture, theirs was superior, but I admire Florence Knoll, Charles Pfister, Ward Bennett, Hans Wegner, Vladimir Kagan.
Using three words, how would you describe your personal style?

I would imagine as a designer living in NYC, you are constantly inspired. Where do you find most inspiration?

The skyscrapers of New York never cease to amaze, particularly iconic mid-century ones like Lever House and the Seagram Building.  But the new residential structures are amazingly dramatic and daring.

Can you offer a tip or two for living small in a New York apartment?


Stop bringing things home! Make the most of storage areas; be creative about how furniture pieces are used – multi-functioning is good.  Decide if you want to be formal or creatively haphazard; either can work, but be true to your path.  It should still look like you live there.
What do you like most about living in NYC?

The crowds. I can always be inspired by people-watching.  The colors, the patterns, the movements are exhilarating.  And there is an energy in the intensity of the bustling.

The crowds.  All that bustling is exhausting.  I’m lucky enough to be able to break up the pace of the city with weekend breaks to Long Island, where I’ve had a house near the beach in Bellport for many years.  It’s been the relaxing antidote to Manhattan that I’ve loved. Beach visits, gardening and entertaining are welcome changes from urban chaos.

What’s a typical day off in the city for you?

What’s that?  I recently took time to go to the Neue Galerie for an exhibit on Kolomon Moser that is about to close.  I think that since I spend weekends out of town, a mid-week midday cultural foray seems slightly scandalous – but it’s a part of living in New York.  If we’ll make pilgrimages to exhibits in Philadelphia or Paris, we should also take the time to engage in what’s right here.

Can you offer any advice for new designers in the city or those heading to New York to start a career?

Take advantage of what’s here and who’s here. In New York, there are masters of whatever profession you want to follow.  I’m always amazed hearing about an aspiring neophyte who contacts a hero and lands a job working with them. Early in my architecture studies I got to work with an unsung master of modern design, and in his office was the future partner of a great architecture firm – what great exposure. Why not try it?


Try several jobs or even careers until you find what’s rewarding. You’ll probably be doing one for a long time, so find a career that fulfills, and is fun!

« The End of Another New York Summer
Workin’ the Work Crush: A Perpetual NYC Dilemma »