A 30-block walk down Broadway (with a stop for dinner halfway), one long line, and six flights later…what a journey it was. But in this case, it was the destination that mattered. Lucky for me, for once I wore flats.


Sunday night, I made that journey for a mere 30-minute look high above Columbus Circle. I witnessed breathtaking views of both the city and the familiar statue, which is usually perched in the center of the Circle with buzzing yellow cabs all around, but not this time. Christopher Columbus is now on display in a temporary room high above New York City, and smack dab in the middle of Columbus Circle.

The artist Tatzu Nishi (b. 1960, Nagoya Japan) — known for his temporary exhibitions involving statues, monuments and architectural details — has transformed the iconic statue into a living room focal point. Discovering Columbus is Nishi’s first public project in the United States. 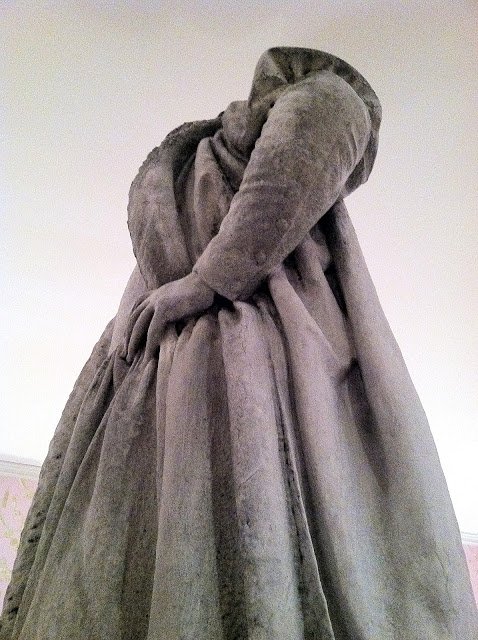 The artist’s vision is realized in this modern interpretation of a New York apartment. Interior furnishings include a sofa, chairs, tables, area rug, a flat screen television, and other decorative elements like modern art and a wallpaper designed by Nishi specifically for the project. I found the pattern on the wallpaper to be both kitschy and cool. Mickey Mouse, Elvis, Michael Jackson, and of course the Empire State Building are a few of the emblems printed on the pink background. Nishi recalled American pop culture from his childhood in Japan when he created this wall covering.


What were people’s reactions? Plenty of smiles, giggles, cameras, and chitchat filled the 800 square foot room.

Italian sculptor Gaetano Russo, designed the 13-foot statue, which is regularly sits on top of a granite column. The installation of the monument took place in 1892, 400 years after Columbus traveled to America.

Discovering Columbus is brought to us by the Public Art Fund, also responsible for other projects like Alexander Calder in New York in 2006, and the New York City Waterfalls in 2008.


The project offers viewers an up-close and personal perspective of the statue in a fictional living space with window views from higher than 75 feet above the street. The exhibit runs through November 18. Admission is free, but a timed ticket is required. Visitors are permitted to view the monument for up to 30 minutes.

« My Daughter’s Audition: If She’s Meant to, She Will
First Date Chatter: What Can I Say? »