THIS BAR HAS CLOSED.

Avenue C is a trek. And I’m saying this as someone who lives on Avenue A.  If you’re going to walk that far east, farther from the subway and more isolated from civilization, you’d better have a good reason. Evelyn Drinkery, a bar I discovered last fall on a rainy and dim evening, is  worth the walk deep into Alphabet City.

Upon entry, the dark, candle-lit space seems a bit outdated, perhaps not as trendy as the other East Village bars. The exposed brick and heavy steel doors pair oddly with the pounds of melted candle wax on the inside walls –– are we in a Medieval castle or a quirky downtown speakeasy?  The booths in the back room feel more like a 1950s sock-hop than anything else, and a flatscreen TV in the front of the bar once again confuses the centuries of decorations pervading the small space. 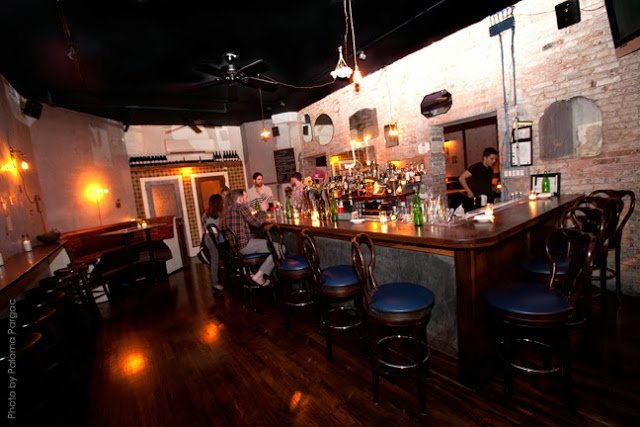 Evelyn charms in its antiqueness, its retro cocktails and old school music selections. The first night I visited Evelyn, a DJ in a vintage Hawaiian shirt spun records (yes, actual vinyl) and got the back room dancing to some beats clearly stuck in the late ’80s. My friends and I had a blast, eventually joining in on red velvet birthday cake celebrations with a group of generous strangers.

The cocktails themselves stunned: a perfect balance of booze and mixer, adorned with simple yet fantastic toppings like candied ginger or a fluffy egg white.

I returned a few weeks later, expecting a rowdy dance party and perhaps some more free baked goods. But alas, the turntable was pushed against a side wall.  Instead, a motley crew of men a good 3-4 times my age sat drinking whiskeys at the front bar, which was surprising since three significantly younger and more alluring men own Evelyn. Obviously, this drinkery attracts all ages.

Getting ready to leave with my friends in tow, we caught the attention of neighborhood celebrity, Nick Hook. He invited us to sit and have the warm rum punch the bartender had created for the cold weather. It was not my favorite on the menu, but I soon moved on to the creations l loved: boozy egg creams and phosphates, reminiscent of a New York City I don’t even remember, but cocktails that may make my grandma proud.  We discussed the ways in which a slide projector would be more valuable to Evelyn’s decorations than its TV –– there’s no way anyone is watching sports or sitcoms here.

Over the past year, Evelyn has been my go-to place for a good cocktail and hopefully a conversation to match the quality of my hand-shaken long drink creation.  The menu changes seasonally, so you’re always in for a surprise.  The “Cacahuete,” a Mexican-inspired peanut flavored cocktail with a special liqueur, has long disappeared, but if you ask on the right night, you may get this savory creation.
Other favorites include the luxurious “Madeline’s Rose,” with gin and champagne, which is just as pleasant and easy to drink as ordering another, and another, will be.  The “Daisy Ferrigno “balances both spicy and sweet, with pineapple, jalapeño, and shaken with gin; this cocktail is not for the faint of heart.  But really, you can’t go wrong, and can perhaps even have a bartender improvise your favorite flavors, be it St. Germain, Pamplemousse Liquor, or even BBQ sauce.
Evelyn celebrated its one-year anniversary this past week, and I’m so glad the business made it.  It opened in the roughest of times, right before Hurricane Sandy.  And just when they were beginning to serve food, the storm hit, the venue lost power and sustained some water damage, and all thoughts of a menu evaporated quicker than the massive puddles in Tompkins Square Park.  But for 365 days, they have sustained an awesome cocktail list, worthy of keeping their spot on Avenue C for countless years to come.
Images via Evelyn Drinkery.