Time flies when you live in New York. When I first moved to New York City in the summer of 2007 and met Mike’s coworkers, one girl Aldyn told us that she’d lived here for five years, and yet it seemed like only yesterday when she’d first arrived. “Life goes so fast here,” she said. “You’ll wake up one day and realize that you’ve been living in Manhattan for five years.”

In 2007, life happened at lightning speed too. Within three to four months, we’d sold our house, found jobs in New York, rented an apartment, and made the 900-mile move from the South. It was a stressful time, but an exciting one. It was also tough for Michael and I – we were living separate lives for six weeks. I was in Atlanta packing and tying up loose ends, while he was in Manhattan starting his job and a new life without me. He’d loaded his personal belongings, twin beds, a sofa, table and a few chairs into a small trailer when he embarked on his New York trip alone. Movers would deliver the remainder of our furniture in June when we left our Grant Park house.

Long-distance moves are never easy, but there were so many details to work out, and it was a nerve-rattling time. I can never forget the sound words of advice from my mother-in-law, Sylvia Kaler, “Try not to stress darling,” she told me. “You really need to enjoy this time. It’s so exciting and you have so much to look forward to.” Not sure that I succeeded at not stressing, but I tried to enjoy every moment of what was happening leading up to the big move.

In mid-June, Mike returned to Atlanta for moving day. We loaded another U-haul trailer, attached it to the trunk of our SUV, and headed North on that Saturday morning with our pets Jake, Rudy, and Mimi in tow. We stopped in Virginia, which was about eight hours into the trip, and stayed for the night. Somehow, we managed to find a pet-friendly hotel that accepted a 90-pound dog and two cats. Don’t ask me how.

Late the next morning, all five of us hit the road and drove the longer leg, arriving on the Upper East Side of Manhattan late that evening around 10 p.m. We emptied the trailer, loaded our personal belongings in the service hallway of our new home – a pet-friendly overpriced cookie-cutter high-rise building on East 94th Street. We managed to carry what seemed like a hundred bags through the hall, to the elevator and up to our almost-empty two bedroom on the 29th floor. Finally at about 11:00 pm, we finished.

Mike left immediately to turn in the trailer. I fed the pets and walked around, observing and making myself familiar with our 950 square foot apartment, which I’d briefly visited about seven weeks earlier. We were both starving since we hadn’t eaten dinner. I stared through the windows, (there were about nine in our living room), and the view captivated me. Wow. For about five minutes, I got so lost in the thousands of bright lights and the tranquility of the East River with Queens in the distance, that I’d almost forgotten how hungry I was until I remembered Mike’s words, “Order food.”

Mike had delivery menus stashed in our little kitchen, but I honestly thought it would be too late to order anything. It was a Sunday night – what would be open? I had to quickly remind myself that this was Manhattan. I wasn’t in Georgia any longer. I ordered our first meal at 11:20 p.m. (cut-off was 11:45 to place an order) from a Chinese restaurant just a few blocks away. By 11:40 and a buzz from the doorman later, piping hot noodles were in my hands. Mike returned and we sat at our 36″ dining room table, which he’d placed in the corner of the doubled window-walled living room. It was the best Chinese food that I’d ever eaten, with certainly the most striking dinner backdrop: Manhattan.

Monday morning, the movers arrived. At least we’d awoken in a sun-drenched room at 5 a.m., (the sun rises extra early on the East side of Manhattan) and prepared for the drama. By that afternoon, we had wall-to-wall boxes and furniture in every room. One by one, we unpacked and organized. Several days and about a dozen trips to the Ace Hardware Store later, we had closets outfitted, shades and curtains up, and most everything in a spot. The pets actually adjusted better than we’d thought they would. It took Jake a few days to figure out that we no longer had a yard. And instead, he’d be going down an elevator to get outside to the massive concrete jungle to do his business. While were far from grass,  at almost thirteen, when he had to go, he had to go.

Mike returned to work a few days later and I finished tweaking the decor since I had about two weeks until my job would start. I got out and explored the city, figured out how I’d get to work on the subway, and had a brief visit with my mom to shop for career clothes, which I hadn’t needed in years.

On July 9, 2007, I started my job at Holly Hunt. I was more apprehensive on that day that I’d been during the interview (which is hard to believe), but somehow, I trudged through the nerves and made it to work, surviving the first day. My manager, Joyce, (who is now my friend), was supportive, encouraging and introduced me to everyone who worked for the two Midtown showrooms. My first friend was John Nickles, another salesperson, with whom I eventually shared the sales floor. And Daisy Nemeth, she majorly saved my butt by teaching me anything and everything she could. She was unbelievably patient with me, and eventually, most of what she taught sunk in.

Five years, four jobs and two apartments later, here we are. It’s crazy that time has flown by this quickly. I woke up the other day and realized those words that Aldyn had said now applied to me, “It’s been five years already, and I can’t believe it.”I made friends through Holly Hunt that are still a part of my life. I don’t see them as frequently as I’d like, but when I do, it’s like I never left. I also made fantastic connections that will continue to benefit me for the rest of my time here in New York.

Are things how I thought they would be? Nope. Not even close. Is my New York life how I imagined it? I’m not sure that I imagined it in any specific way because I had no clue what life in New York would be like or bring with it. Not knowing was part of the adventure. Living here has definitely thrown a few curve balls my way, but that’s life anywhere, and my life today is completely different than it was in 2007.

Getting to New York was a journey in itself, and even now, five years after I’ve arrived, some days I could still pinch myself because it feels too good to be true. One thing that has remained the same and I’ve yet to take for granted is how incredibly lucky I am to be here. 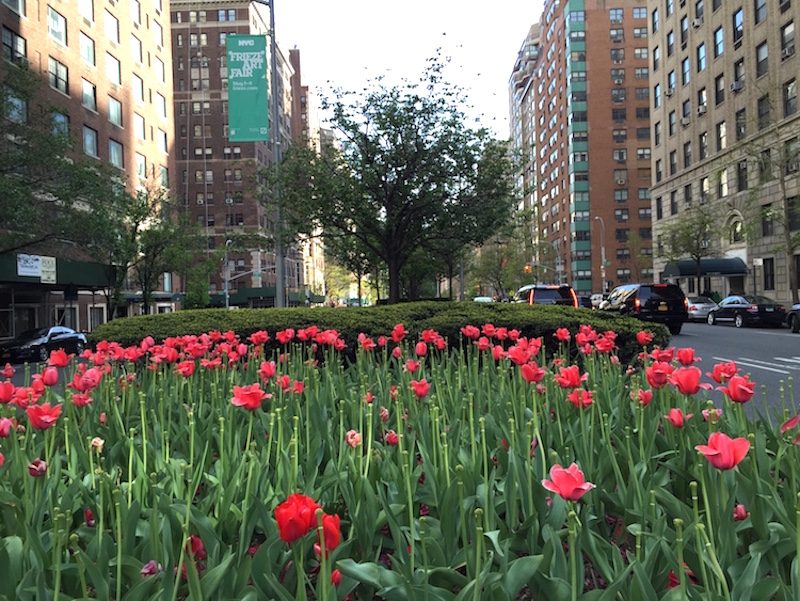