Fun, free things to do in New York in the summer

Having fun in New York City doesn’t come cheap, but that changes once summer arrives. Perhaps it’s all the Mister Softee trucks circling around, enticing everyone with cool and tasty treats. For whatever reason, NYC seems to soften a little and become more generous this time of year – to the point that it’s practically giving away entertainment in all forms!  Whether you want to see a world-class play, go to a museum, or glide down the Hudson River, here’s a list of free things to do in New York in the summer.

Shakespeare in the Park

Regarded as one of NYC’s most beloved summer traditions, Shakespeare in the Park pays homage to history’s greatest playwright. Past productions have featured a roster of award-winning actors such as Denzel Washington, Patrick Stewart, Natalie Portman, Meryl Streep, Anne Hathaway, and Al Pacino. Public performances are free and take place at the Delacorte Theater in Central Park. Scoring a ticket isn’t easy, but not impossible. You can either wait in the free line (opens at noon) or test your luck in the digital ticket lottery on the day of the performance. This summer features Othello and a Public Works musical adaption of Twelth Night.

Free Summer Movies in the Park

With the cost of a ticket and snacks, going to the movie theater puts a major dent in the wallet. For a truly unique cinematic experience that won’t cost a penny, check out the free summer movies playing in NYC’s outdoors parks and public spaces. Sure, you’re not going to see this summer’s blockbuster. Rather a well-curated program mixing winners from the last awards season, Hollywood classics, and animated favorites. So pack a blanket and picnic basket and make a night of it!

Gain a new perspective of the city by taking advantage of free kayaking season at The Pier 26 Downtown Boathouse. After a brief instruction and signing a waiver, you get to paddle a sit-on-top along the Hudson River. The experience offers a chance for a little physical activity outdoors while connecting with the NYC’s historic waterfront. And with the spectacular views, you’ll walk away with a nice collection of Instagram-worthy photos.

For the past two decades, the Brooklyn Museum has hosted Target First Saturday, featuring an exciting art and performance program that is free and open to the public. The event has done wonders for creating a welcoming space where people can experience the dynamic cultures that make up Brooklyn. Nights are often themed allowing guests to taking in everything from gallery tours, lectures and film screenings to live music, dance, and poetry.

As New York’s largest free outdoor performing arts festival, SummerStage hosts concerts at various local parks and public spaces through out the five boroughs. The line-up includes artists and performers from around the world representing every genre including classic New York hip-hop, indie-rock, EDM, Latin, jazz, classical, and more. Seating is first come, first serve with doors opening about an hour before the performance starts.

One of the downsides of living in NYC is the lackluster stargazing that results from all the light pollution. Thanks to the High Line, we have the chance to experience the enchantment of a twinkly night sky. Every Tuesday from dusk to 30 minutes before closing, the park hosts a free stargazing event. Look through high-power telescopes provided by the Amateur Astronomer Association of New York to observe the breathtaking celestial canopy above like never before. 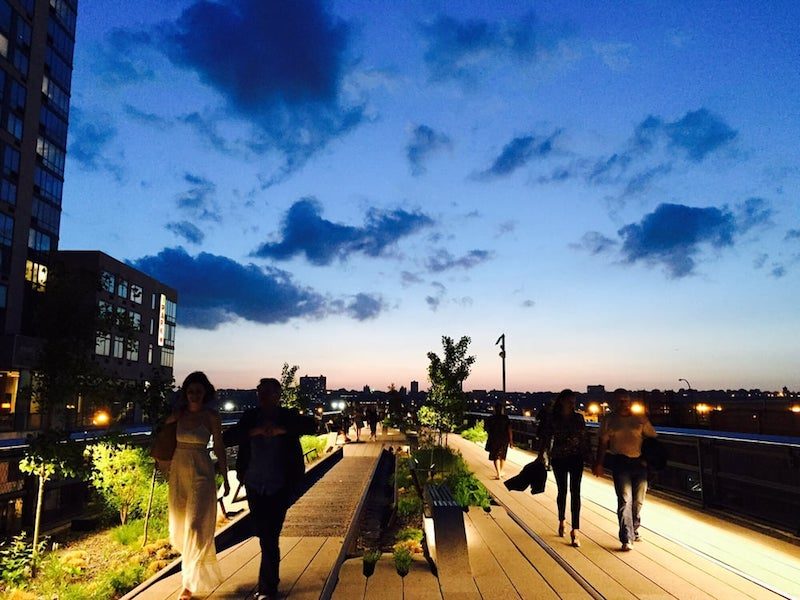 If you know of any fun and free things to do in New York in the summer, please tell us in the comments!

Shakespeare in the Park photo by Pattie L. via Yelp. High Line photo by Lauren T. via Yelp.

Find more free things to do in this blog post. Plus  free classes in NYC. And how to score freebies in New York.