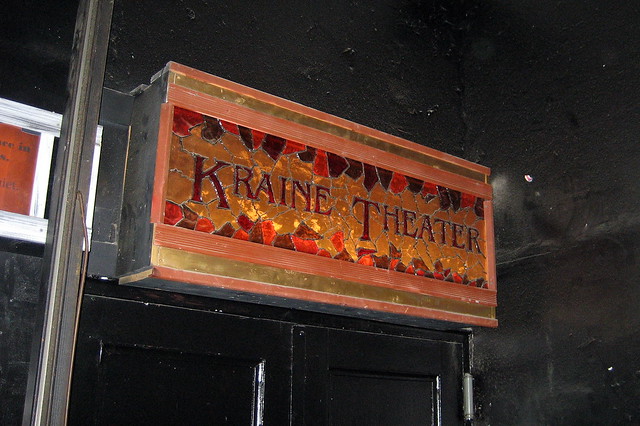 The Kraine Theater is located next door to the NY Theater Workshop, where Rent and Once began.–by wallyg via Flickr

From the page to the stage

Rent.  Spring Awakening.  Urinetown.  These known Broadway blockbusters have become an integral part of American culture. Yet, they were not overnight sensations. Before arriving on the Broadway scene in New York, these shows had a long history of rewrites, workshops, festivals, and out-of-town tryouts before becoming the hits that theater lovers are now so familiar with. Urinetown, for instance, began off-off Broadway in the NYC Fringe Festival, before making the big move to the Great White Way. From the page to the stage is often a long, involved process.

Actors who participate in early workshops have vastly different experiences than actors who join an already running commercial production.  Once a show has been on Broadway for a period of time, replacement actors have very specific tasks—they must hit their marks and utter their lines in the exact same manner in which the lines have been said by previous actors in the roles.  The actors perform tracks that fit into the show like a cog in a clock. There is little to no room for experimentation or creativity.

Contrarily, in the workshop phase of a musical, cast members get to participate in a process of collaboration, trial and error, creativity, and constant change.  I am fortunate to have the inside scoop as to what goes on in this first phase, as I am currently rehearsing for the world premiere of Showgirls, The Musical! a parody of the ’90s cult classic film. I play the iconic role of Cristal Connors, (originated by Gina Gershon), the territorial and predatory star of Las Vegas.

In our small studio rehearsal space in Midtown Manhattan, we are often given complete freedom to stage our solo songs, to be completely uninhibited, and to “just play.”  A cast member’s ad-libbed line or passing joke may strike a chord with the writers and make its way into the script as a permanent fixture. Entire songs can be scrapped or added at a moment’s notice.

Recently, a famous scene of dialogue involving Cristal’s love of eating doggie chow was turned into a full blown musical number.  It is our job to learn quickly, incorporate the changes, and breathe life into each word on the page, so the writers can determine what works and what doesn’t.  We are creating the blueprints which other successive casts will eventually follow.

Thus far, our team effort has resulted in a satirical interpretation that features signature moments from the film as well as some personal touches.  Rest assured that Cristal’s incessant lip licking, Nomi’s dramatic temper tantrums, topless Vegas dance numbers, and a very memorable water scene are all included.  However, there are also surprises such as singing slot machines, talking hamburgers, dancing boats, and a show stopping number in which the infamous “Thrust it!” character reveals his secret ambitions.

Showgirls! will soon begin previews in an intimate 100-seat venue in the East Village. It is possible that this run could be the beginning and the end of this show’s life.  Yet, whether or not this musical becomes Broadway’s next “smash,” I am so grateful to have gotten to work on the project from the ground up and to have had a hand in its creation.

Tickets have already been purchased by casting agents, reviewers, and celebrities alike.  Our choreographer, Jason Wise, constantly reminds us, “This is New York City.  You never know who is in the audience. Anything can happen.”

Indeed, the sky’s the limit when the curtain rises in just a few days, and as they say in Vegas, “You gotta gamble if you’re gonna win.”