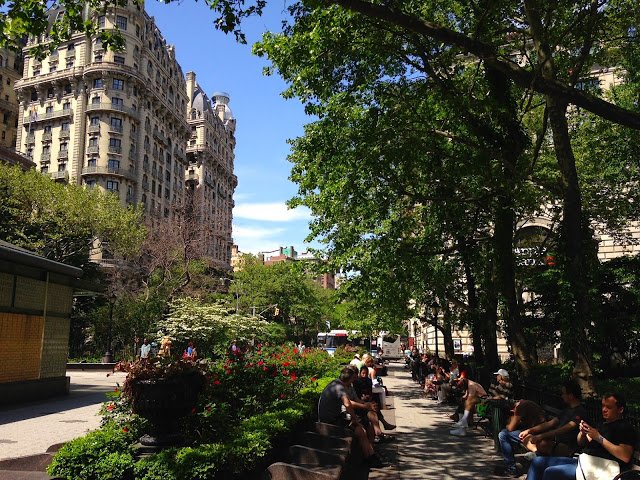 Since I wrote this post originally, I’ve spoken to two women who were Mrs. Looper’s friends. I’ve known little to nothing about her, except that she was 103 when she passed.

According to Robin and Nancy who have lived in our building for years, Josephine Looper was a lovely, elegant woman with a strong sense of style. She was meticulous in the way that she dressed, and was loved by all. </

When I shared my thoughts about the feeling of Mrs. Looper in our apartment, they weren’t surprised. Robin and Nancy thought Mrs. Looper and I would’ve become fast friends. Perhaps we are kindred spirits, past, present and future. I’m sad that I never knew her.

I often stop and wonder where I’ll be when I’m 95, if I’m even here at that ripe old age. I think about the first few decades of my life and how they moved along pretty quickly, and time continues to go by even faster as I age.

There’s a lady on my floor who is elderly. I would guess that she’s at least in her nineties. In a wheelchair most of the time, she’s barely alert. She has a full-time caregiver who yells at the top of her lungs on a daily basis because the old woman can’t hear any longer. At times this is annoying, but most of the time, it saddens me.

Yesterday, as I was waiting for the elevator, she came into the hallway in her wheelchair accompanied by her care-giver and a nurse. She was doing an exercise of some sort in her chair. Pretending that she was walking and using all of her strength to move along without ever standing, it was sweet as they applauded her progress. I could not help but smile.

Many elderly people reside in New York City, and most have been here for fifty, sixty years or more. Many have lived at the same address and raised their families in these apartments.
At first when I thought about this, it seemed unfortunate because Manhattan can be especially difficult to navigate if handicapped in any way, shape, or form. However, I continued to imagine. Once someone is over the age of 80, it could be more difficult to drive or walk. The buses here are both convenient and friendly to the handicapped and senior citizens. Taxis and car services are abundant. Anything can be delivered. Green spaces are located in most every neighborhood. And there are always people around if something misfortunate happens. Not really such a bad place to live at age 95, now is it?
After we moved into our apartment, we discovered the lady who’d lived here previously was 103 when she died. Kind of crazy. Who lives to be that old? In New York City, obviously lots of people, because I see them everywhere.
I remember when we looked at our apartment for the first time. We walked in on that March day, and it felt differently than any of the 150 other prospects that we’d seen. It smelled like a grandmother, which I loved. As I walked through, I could sense the past, even though I was unsure of it. It felt newish, but still had character. The original floors, doors, hardware, tile and tub were still intact. It was kind of like a beautiful historic space that had been cleaned and painted so it felt just right. Luckily, the new kitchen with a washer/dryer and a Bosch dishwasher felt neither old nor historic.
Josephine Looper lived here for many years. Her husband was five supers ago. I assume that he died and she then moved into this apartment, which was rent-controlled. I always wonder if she had children or grandchildren, or great grandchildren. I question what she looked like and why she came to New York. Was she born here or was she an immigrant who came through Ellis Island?
But mostly I question what it was like to be 103, and what her secret to longevity was. Was it all of the good New York water? Or maybe living a stress-free happy life in a place that she loved?

As silly as it sounds, I feel her spirit sometimes. Each time I walk into this apartment, I still detect the granny smell. Even two plus years later, with all of our belongings, a dog and a cat, it’s the energy of Mrs. Looper.
When I see a senior person with a walker or in a wheelchair on our street, I think to myself: That’s going to be me when I’m 95. I’ll still be living on West End Avenue, and I’ll be crawling up and down the street at the speed of a turtle. I’ll have lived in the same apartment building for more than 50 years.” Wow–I’m history in the making.  If it was good enough for Mrs. Looper, it must be good enough for me.