Most New York hotels feature their share of perks, but there’s only one hotel that provides access to a private park. Located less than one block from the gated green space, Gramercy Park Hotel grants each guest access to its namesake park. A key to Gramercy Park is coveted, and I can only imagine that some travelers stay at this hotel for that reason alone.

Gramercy Park is the only remaining private park in Manhattan, one of two in NYC and three in the state of New York, and having the ability to step inside makes staying in this hotel all the more alluring. With less than 400 keys held by residents surrounding the park, (six by the hotel), unlocking those wrought iron gates is no easy feat. To access, you ask reception and a doorman will unlock the park for you. (Sorry, you don’t get the key yourself.) Then you give him a buzz and he’ll return to let you out. (Once you’re in the park, you’re locked inside.)

But Gramercy Park is not all that this hotel offers. Besides boasting entry to this rare amenity, Gramercy Park Hotel, for many, is a destination unto itself.

Design-wise, it’s one of New York’s most provocative hotels, with lavish interiors reimagined by painter and filmmaker Julian Schnabel. Moody and mysterious with a Bohemian feel, the public spaces and guest rooms feel shabby and chic at the same time.

The Renaissance Revival architecture provides a stunning backdrop for eclectic antiques, furnishings and rare objects d’ art culled from around the world for the hotel’s 190 rooms, each of which is different from the others.

Beyond the rooms, the nightlife scene here is one of the most exclusive and high-profile in town. Unfortunately, I did not get to experience a night at the infamous Rose Bar, a swanky lounge that attracts A-listers and fashionistas. (Not really my scene, but it would’ve been entertaining to witness.)

Rose Bar accepts reservations only until 9 p.m., after which, entry is by invitation only. I did walk through during my tour of the hotel, however, and experienced the stunning art lineup first hand. The rotating collection includes pieces by 20th-century artists such as Andy Warhol, Jean-Michel Basquiat, Keith Haring, and Damien Hirst. Schnabel designed the furnishings, so this bar, too, with it soaring ceilings and plush textiles, has that luxury, Bohemian vibe. (No photos allowed here.)

More approachable, Jade Bar sits alongside Rose Bar. It’s an intimate space, so not too much elbow room here, and inevitably, you’ll find people who didn’t make the cut for Rose Bar. But, it’s an option for having an expensive cocktail somewhere other than Maiolino, Danny Meyer’s Roman-style trattoria, up next.

There’s a lot of hype around Maiolino, and I have to say, the food lives up to that hype. While the reservation/host team was a bit snippy, my server was a doll. Unbelievably, it was his first night working as a waiter here. He seemed like a seasoned pro, spitting out the menu descriptions like a veteran and recommending various dishes. I ate both dinner and breakfast here (sat at the bar for the latter) and everything I ate was tasty. Try the spaghetti carbonara if you eat pork, just know it’s a very rich dish. 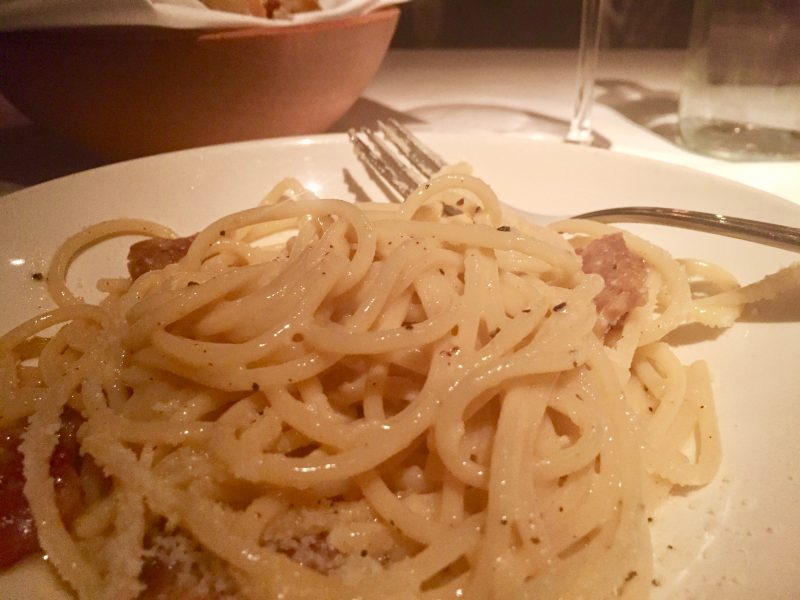 The standout, though, was the ricotta pancakes (made our best-of list). I cannot stop dreaming about their not-too-sweet fluffy goodness. Totally worth the $22. (Yes, $22 for pancakes!) Also, I thoroughly enjoyed the mushroom and rapini hash. Pretty much perfection! 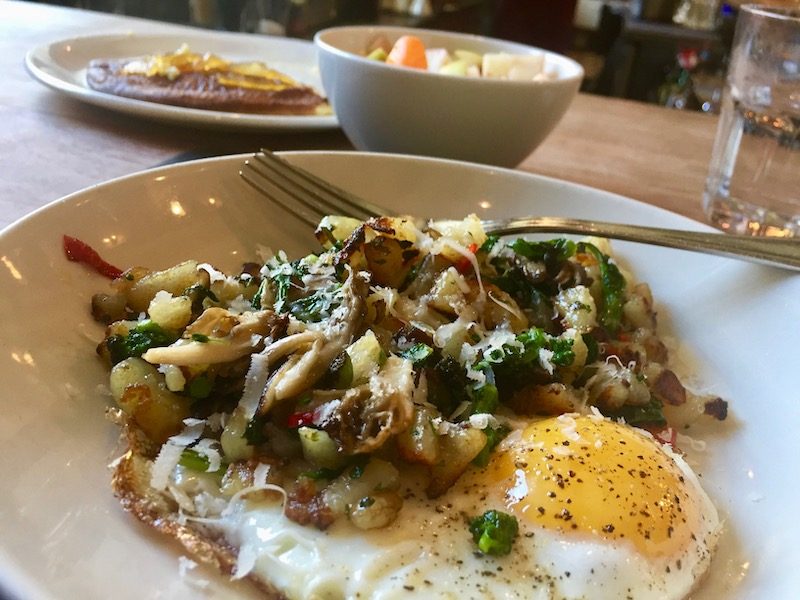 A comfy bed, 400-thread count sheets, tons of atmosphere, a view of the park – what else could anyone want in a New York hotel?

I’ll never forget that one night at the Gramercy Park Hotel, but for me, spending time wandering through Gramercy Park itself, something I’ve longed to do since I moved to New York, tops the hotel stay. Don’t get me wrong, I’m thrilled that I had the chance to stay a night at such a storied hotel, one dating back to the 1920s. But that park? That’s an hour of my life I’ll cherish forever.

Happy to be in Gramercy Park!

For more about this hotel, read my full review in The Telegraph.

Also, the Crosby Street Hotel. The Soho Grand. And where to stay in Times Square.

Note: I found out after my visit to Gramercy Park that photos are not allowed. I guess I was lucky because no one stopped me. 🙂 If only the trees had been blooming, but in March, winter still hangs on.