New York native Howard Kalachnikoff had no intention of becoming a chef, but his love of food called him into the kitchen following a nine-year career in the record industry. After graduating from the French Culinary Institute and refining his craft at Savoy and other Manhattan restaurants, the chef began his tenure at Gramercy Tavern in 2009 as a line cook, followed by Sous Chef, and finally, Executive Sous Chef.

You will find Chef Kalachnikoff at the tavern on a daily basis where his duties run the gamut, and his days keep him busy. He usually arrives in the morning, reviews kitchen notes with the Gramercy team, creates special menus, and works on new recipes like the dish for the First Annual Lobster de Mayo, which will take place on May 10 at Capitale.

Gramercy Tavern is one of select fine dining establishments involved in the lobster extravaganza, which is organized by leading Maine lobster purveyor, Homarus, partner to Gramercy as well as a plethora of other topnotch NYC restaurants. The four-hour party will feature incredible food, drink, music, and a silent auction to benefit City Harvest, a food rescue organization dedicated to fighting hunger in New York’s five boroughs. 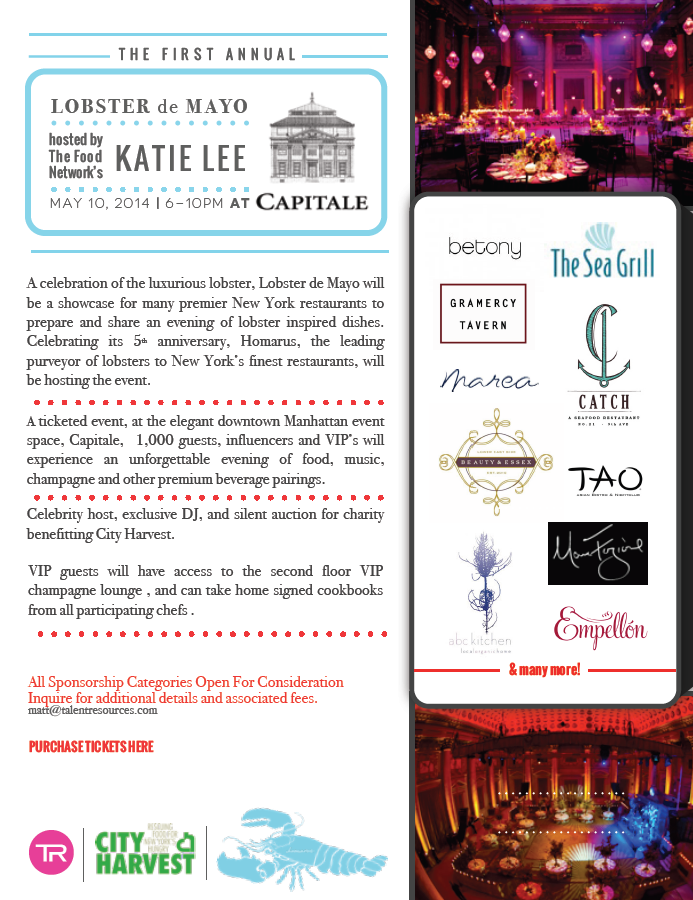 I recently caught up with Chef Kalachnikoff while he took a break from the kitchen at Gramercy Tavern. We chatted about his career in food, how he’s seen the city change since his childhood, and one of the most luxurious ingredients to cook: LOBSTER.

TK: What’s it like to live in New York now, versus when you were growing up?

HK: There were way fewer people. I grew up on 22nd between Park and Broadway—Green market was there, but it wasn’t such a hub. A couple of pioneering restaurants included Union Square Café and The Coffee Shop Bar –– that opened up in the late eighties. There’s a lot of stuff going on now.  I don’t love this part about New York, but that keeps things pretty exciting. While sometimes I feel protective of this part of town because this is where I grew up and I wish it didn’t change so quickly, it still does keep it fresh.

TK: What inspired you to become a chef?

HK: My parents had a catering company when I was growing up, and our apartment had a commercial kitchen in it. I was exposed to cooking at a young age and fell in love with it. I associated cooking with being helpful, being a part of the family, and being productive. I always loved it greatly.


TK: What’s your favorite dish or cuisine to prepare?

HK: It’s sort of changed over the years.  I loved cooking eggs, but they are not very forgiving, you have to develop a great sensitivity to heat, timing, etc. Then fish, but fish requires a skillful hand when prepping as well as cooking.

For the last few years, vegetables have become the most satisfying thing to cook.  There’s the greatest variety of textures, flavors, and colors. You can take vegetables into a luxurious standing. Some have a short window of seasonality, so they become precious in the moment. Vegetables are a constant reminder of Mother Nature more so than fish or meat. Artichokes are probably my favorite.
TK: You’ve probably seen lobster come a long way in the culinary world (there are other exciting ways to cook lobster beyond the traditional steamed or broiled whole lobster preparation), can you elaborate on this a bit?

HK: We’ve seen the lobster population maintain and even grow at a sustainable rate so we don’t have to worry about purchasing and consuming lobster. That’s first and foremost for us. Price of lobster is no longer daunting especially since we use it in a variety of ways.

We use the shells for sauce; we use the high albumin, rich tips of the claws, which are not desirable, in a poached state.  We trim off and puree them, dry, and fry into chips.  We’ll cook the tail gently, slice into salads, or cut it into thicker medallions and fold into pasta. We’ll use the knuckle meat in a layered salad preparation. We’ve treated the claw meat in a way where we pull the fibers away from membrane and the meat flakes up like a crab meat. It becomes a new texture you wouldn’t expect.

TK: Ok, now I’m officially hungry. I know it depends on the dish, but for wine novices, do you have any suggestions for pairing with lobster?

TK: If you’re not cooking, what do you love to do in New York?
HK: I don’t do it as much as I used to, but I love exploring the city late at night. That’s not going out to nightclubs and bars, but going into parts of town that are desolate, and exploring new neighborhoods. A lot of people from outside the city discover places that natives don’t. While I like to explore other cities, this is the city I’ve explored the most . [In New York} you’ll always have something to discover.

« Rizzoli: The Most Beautiful Bookstore in NYC
NYC Could Be Out of Gefilte Fish; A Rat on the Subway; Manhattan Might Be the New Brooklyn in 2 Years; and More »