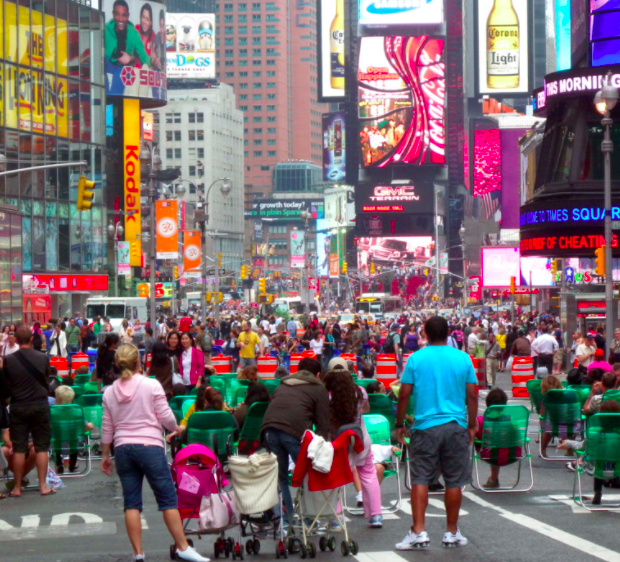 This post is part two of “Homeless in Times Square.” Read part one here.

Bewilderingly, Manhattan wakes up immediately as if a switch is flicked. One moment I can’t quite make out the features of an exhausted coffee cart vendor –– and the next –– I notice everyone trotting off to the office.

I decided to head back to the sloping side of the Grace Building off Sixth Avenue, to its confined public seating area. I needed a change in venue and the plaza was a quiet place of normality away from the never-ending hypnotic draw of Times Square. Of all the neighborhoods, I thought, why am I trying to land a job here? But the circumstances were out of my hands. It was all I could do but hope that I would pass muster to an artful couple and their 18-month old. All they knew was that I was a student, a transplant, fresh meat off the bus from New Jersey and still green to NYC’s veritable red-light district.

The time of my meeting was approaching, so I returned to the Port Authority washrooms for some last minute grooming. One last look at the wrinkled instructions: 10 a.m., sixth floor. I dashed back to the building, finally buzzing the bell this time around when a person exiting shouts out, “It doesn’t work, honey” with a loud and dismissive laugh. Another drag queen owns the avenue. I hit the pay phone. Three rings later and the story is the same: yes, the buzzer is broken. I’ll meet you downstairs. Never was the phrase more welcoming.

A few minutes later I was greeted by Charlie, a smallish, sort of demure man with a day’s worth of facial hair and messy strands creeping from under a beat-up fedora. We shook hands and he guided me upstairs. Barely a word was exchanged in the elevator, which spilled out into the sixth-floor apartment without warning. “It’s a converted doctor’s office,” he said.

Indeed it was. A long narrow hallway connected two enormous rooms…one obviously a former waiting room and the other, perhaps it was a lab at some point. In between, there were at least four other micro “exam” rooms, each complete with a working sink, and each now a bedroom. “This will be your room,” Charlie said.

The space was as small as a dorm with one large window that looked directly across the street into the New York Times. The floor was cold, bare linoleum. Two drawers lined the bottom of a single platform twin-sized bed with a fabric print of a set of ribs tacked to the wall that read: “Void, Of Course.” Little did I know it then, but the sentiment was courtesy of artist Kiki Smith, a close friend of my new employers

To my surprise and relief, I got the job — a live-in position as a nanny for the most adorable and well-behaved child Times Square has likely ever reared. Today that 18-month-old is all grown up— a dashing party promoter, DJ, artist, and Jack-of-all-trades.

I saw his photo in New York Magazine a few years ago and was immediately taken aback. All the years that I cared for him came washing over me, and then I remembered the two days I was homeless, the two days before I became an ad-hoc parent in the most unexpected place in New York: the dirty, sleepless monster then known as a non-stop party playground for nude show revues, pornographic movie houses, and what seemed to be an endless stream of drag queens and unclassified weirdness.

« Beth Griffenhagen Dishes About Haikus, Cheese and Being Single in NYC
365 Days After the Crash »