It bothers me when New York City treats Staten Island as its stepchild, causing the locals to refer to it as “the forgotten borough.” It didn’t help matters when Staten Islanders felt neglected by government and city officials during the initial impact of Super Storm Sandy, which devastated parts of this “fifth borough.”

Perhaps it troubles me so much because I have fond memories as a kid while traveling from Brooklyn to Staten Island to visit my family. At the time (circa 1970s), going to Staten Island was as though I was traveling to the country, but still a short commute away from home. For me, it was my way of escaping the noise and frantic atmosphere of Brooklyn and getting in touch with nature. I would go outside and catch and release frogs all day long. Not to mention, it was the first place I ever saw a possum; I probably would’ve reacted the same to a martian sighting. Strangely enough, I didn’t see one of those ornery-looking creatures in Brooklyn until I was 40 years old.

With the borough experiencing a tremendous growth population over the years, it has become more city-like without completely losing its suburban feel; though sadly, many Gothamites are more likely to travel to California than they are to Staten Island.

While countless locals ride the Staten Island Ferry daily to commute into Manhattan for work, most who ride the boat to SI go for the views only, and never leave the vessel except for boarding the return trip to the city. They neglect to venture onto the island and discover St. George, one of the borough’s treasures, and an up-and-coming part of the island experiencing tremendous gentrification.

It was my love of baseball that helped me uncover St. George. In June 21, 2001, Richmond County
Ballpark at St. George, now the permanent home of the Staten Island Yankees, the short-season A affiliate of the New York Yankees, opened for business. I would attend games between the Brooklyn Cyclones and SI Yankees,  often bringing my nephew Carmine with me. I eventually began to discover the neighborhood’s beautiful Victorian homes, and numerous amazing places to dine and have fun. 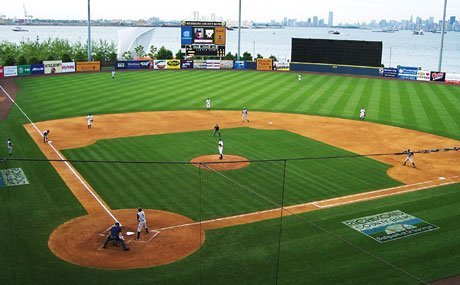 The Staten Island Yankees in action–credit

Since I’ve grown older, my reasons for loving Staten Island have changed. Catching frogs is no longer a pastime for me. I still visit family, of course, and more members now call it home, along with several childhood friends. But I always make it a point to frequent at least one of my favorite spots while there. I can’t pass up eating at Denino’s Pizzeria & Tavern, or new kid on the block, Pizzeria Giove. If you enjoy classic brick oven pizza, then you’ll love both of these restaurants.

SnugHarbor Cultural Center & Botanical Garden, the legendary St. George Theater, the Staten Island Museum, among other places. You see, Staten Island does have a lot to offer, especially its special brand of New York attitude.

Maybe you’ll visit (or revisit) it someday and look at the borough with a new pair of eyes next time. Staten Island can use your support now more than ever since Sandy’s aftermath left it reeling.

And me? I’ll continue to take regular trips across the waters to SI. But who knows? When I feel the need for a change of scenery from my outpost in Brooklyn, I may decide to call it home in the future.

« Christmastime Is Here
Harry, Sally, and a Christmas Tree »