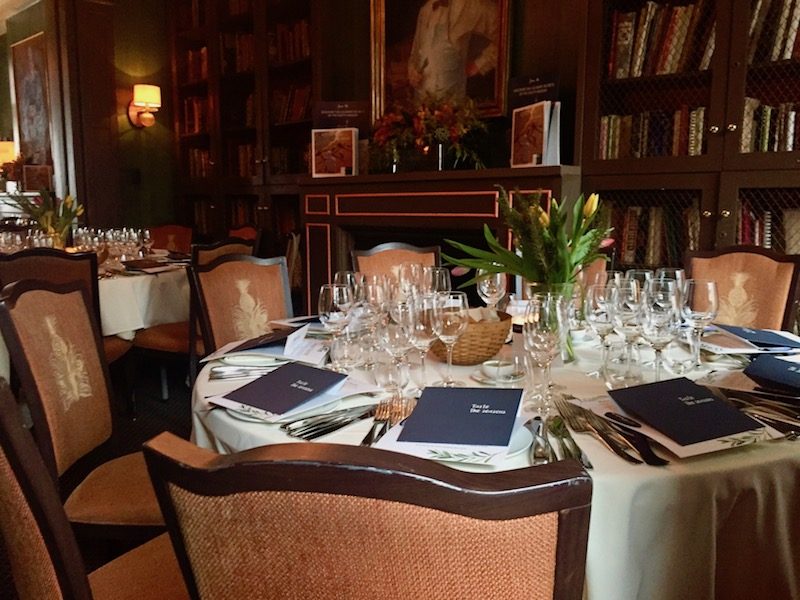 I was ten minutes early. I’d taken a quick trip by subway from The James Hotel in SoHo and was eager to get settled before fellow foodies, writers, and chefs packed the red brick West Village townhouse. I checked in, stored my coat and suitcase, and made my way to the busy but modest kitchen overflowing with pots, platters, fresh, healthful ingredients, and mostly women cooks. Here I was, at last. After more than a decade of living in New York City and eating and drinking in some of the finest restaurants in town, I’d made it inside the James Beard House. Today’s meal would be “Aegean Secrets.”

The menu was undoubtedly Mediterranean: fava bean puree, bright red tomatoes with black-eyed peas, and fish salad with lemon and herb sauce were scattered around an island – the staging and cooking area using most of the cramped kitchen space. My mouth began watering as I passed through, catching a whiff and feasting my eyes on what I, and about 50 other people, would soon be eating. And I was hungry. 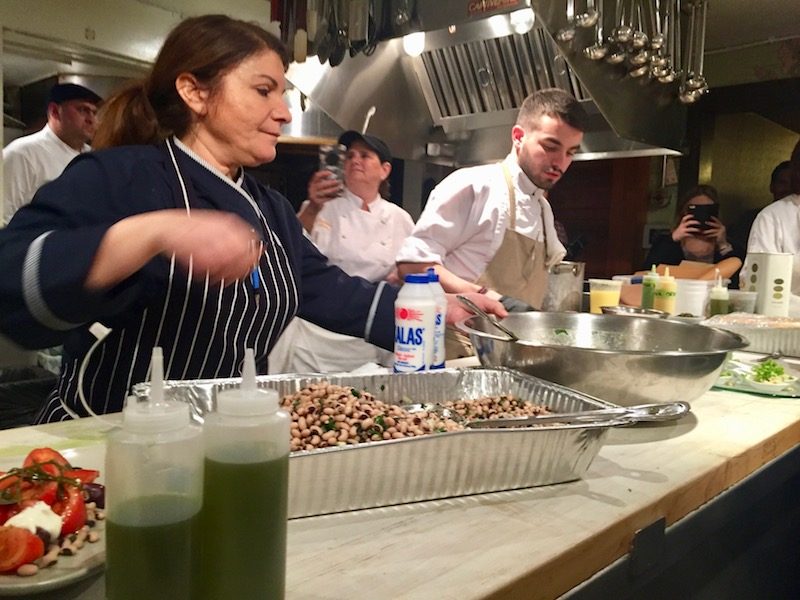 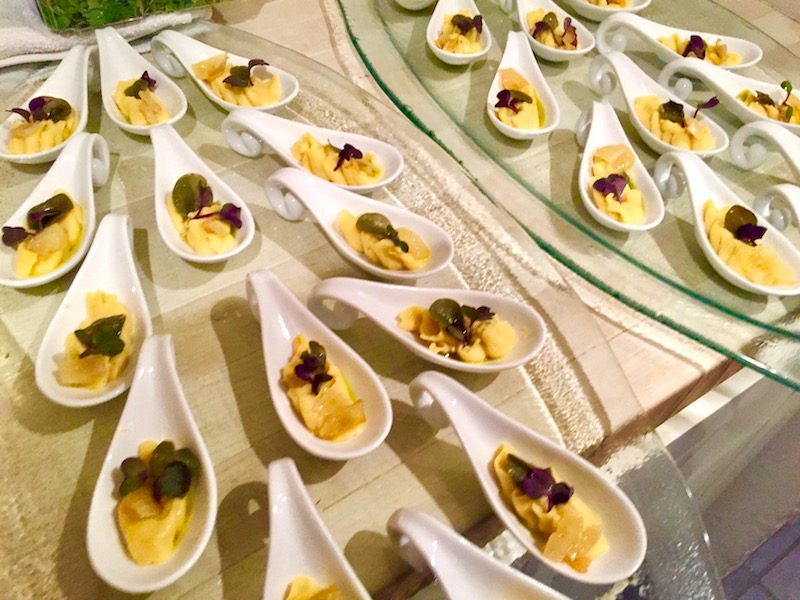 But first, before food: wine. A social hour was underway in a space off the kitchen with a tiny footprint but two-story height. Butlered mezze dishes like spicy feta cheese spread on pita began appearing as servers wriggled through the chatty crowd. After about 40 minutes, I joined the other attendees and made my way upstairs to my assigned seat in the cozy dining room. The “Aegean Secrets” menu at my place setting revealed the lineup of dishes. These recipes were passed down through generations of mothers and daughters, hailing from as far back as the Neolithic era. 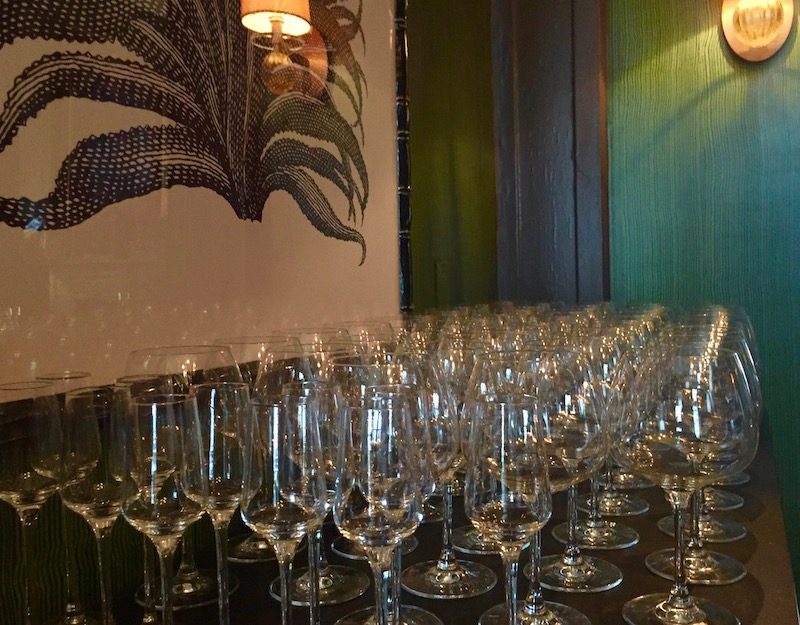 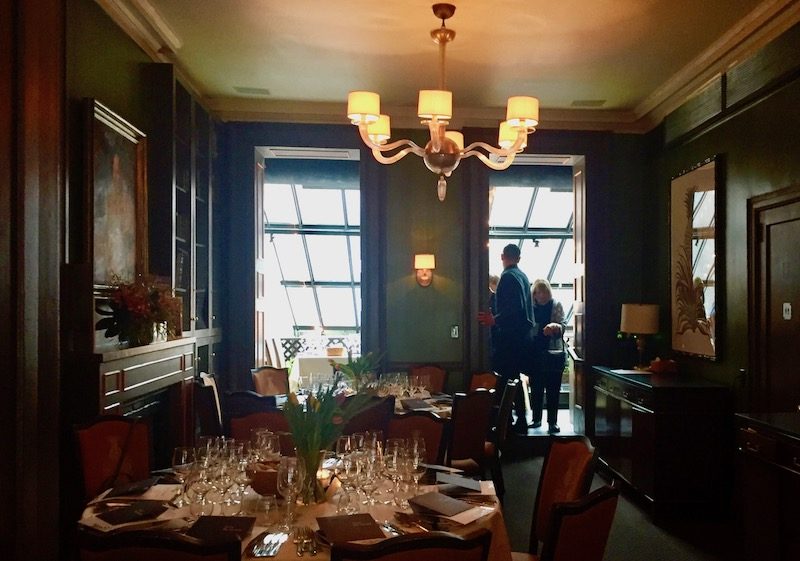 Famed Greek chef Argiro Barbarigou helmed the kitchen and was supported by a female team of Greco-American members of Les Dames d’Escoffier (an invitation-only philanthropic organization for women in food). Post the hors-d’oeuvres, that beautiful tomato salad was the first dish to hit the table. With it came a traditional bread made with mastic, saffron, anise and flax seeds. Fish soup, chickpeas over creamy fish roe and garnished with spicy saffron shrimp, and lamb fricassee in dill avgolemono sauce soon followed. And the best was last: Baklava layered with thyme-scented honey, mastic, walnuts and Greek yogurt. Each course was paired perfectly with wines from Greece. 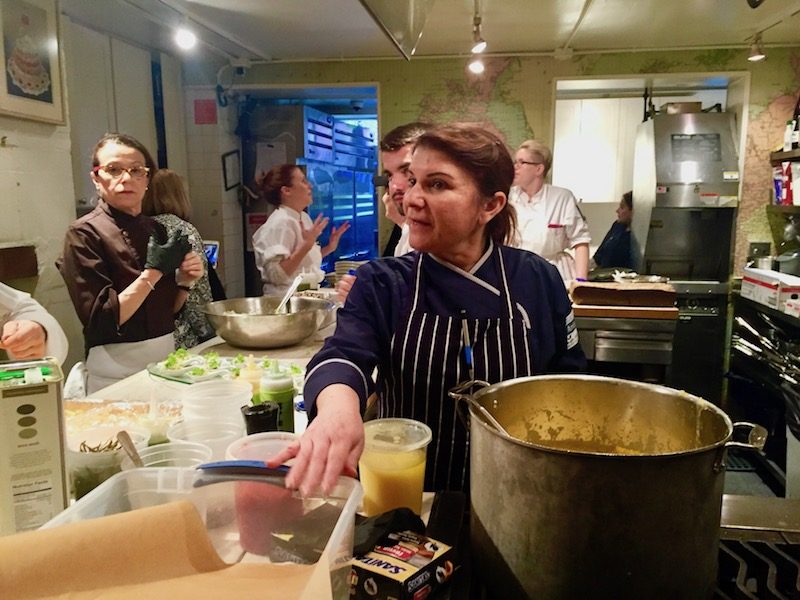 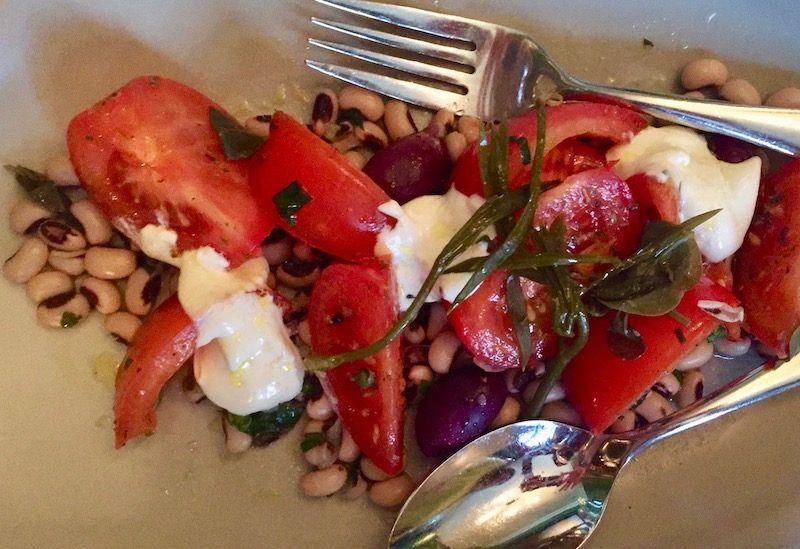 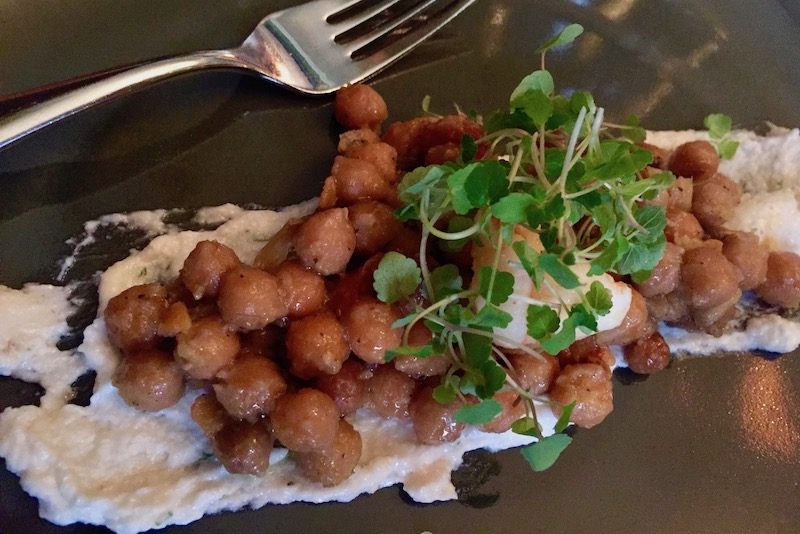 The lunch was initially scheduled until 2:30, and we were running about an hour late. After nearly three hours of eating and drinking, I, along with the other diners needed to clear out to make way for the dinner crowd. Food is serious business at the James Beard House – another meal is always in the works, and another army of eaters is on the way.

I made my way down the stairs and through the kitchen, which was lively if not chaotic only a few hours earlier. Now, it was remarkably calm. Several chefs stood around the prep area pecking away on their smartphones. Much of the crowd had dwindled.

I picked up my luggage and swag bag from South Aegean, bundled up in my warm wool coat, then walked to the 1 train entrance at 12th Street and Seventh Avenue (only a half block away) and headed north to the Upper West Side. My first meal at the James Beard House was one I’ll never forget. 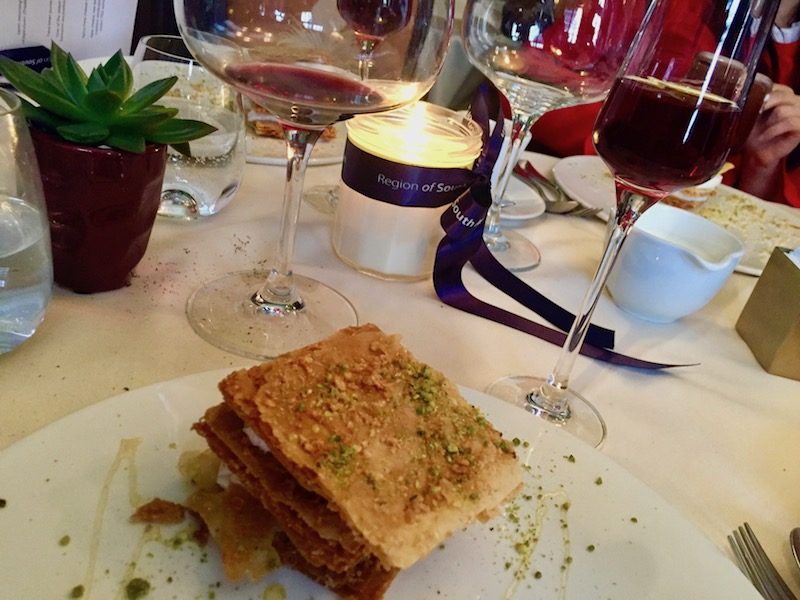 About the James Beard Foundation

The James Beard House is the former home of James Beard, one of America’s food pioneers who was deemed the “Dean of American cookery,” by the New York Times in 1954. Beard inspired, taught and mentored chefs for much of his life. He’s famous for writing more than 3o cookbooks.

After his death, former student Peter Kump purchased Beard’s house at the recommendation of Julia Child and turned it into a culinary center to continue the chef’s legacy. The nonprofit foundation features educational initiatives, scholarships for culinary students, food industry awards and more. Over the years, established and upcoming chefs from around the world have cooked multi-course meals with wine pairings in the kitchen. Whether we realize it or not, James Beard influenced if not transformed the culinary culture in the United States. It’s because of him and the chefs he mentored that we eat the way we do.

The James Beard Foundation hosts dinners in the West Village house almost every night, and you can make reservations on Open Table or through the website. Prepayment is required. I highly recommend. 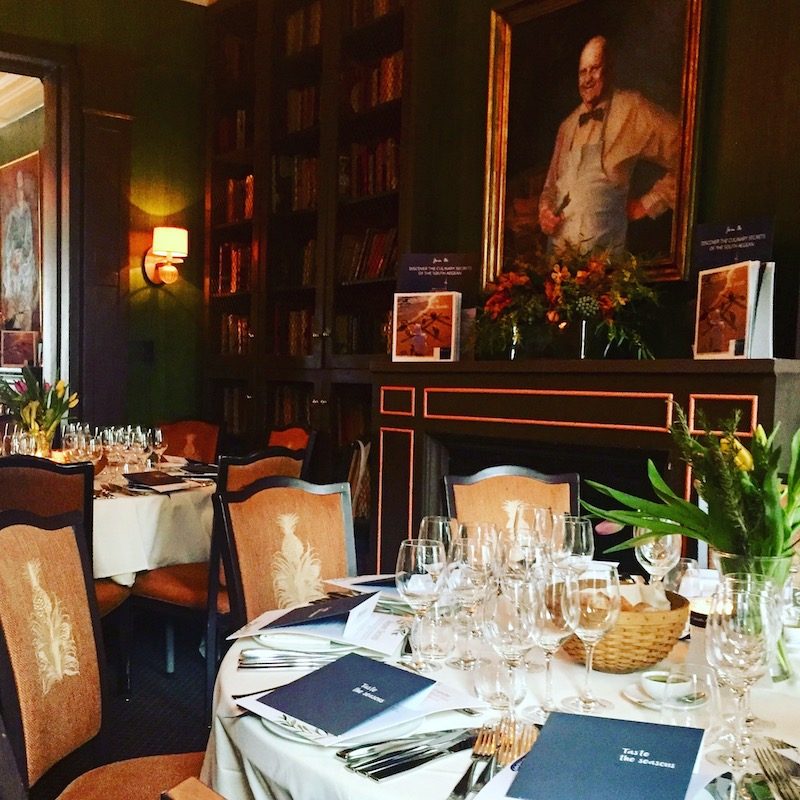 About the region of South Aegean

This region of Greece is one of 13 in the country and consists of the Cyclades and Dodecanese islands, which include Santorini, Mykonos, Rhodes, Milos and other isles in the southeastern Aegean Sea. The Aegean archipelago is home to some of the most ancient cuisines in the world and is mainly known for its fresh seafood and vegetables. Travelers and foodies flock to the region because the area offers incredible gastronomic experiences along with crystal clear waters and magnificent beaches.  South Aegean received the European Region of Gastronomy 2019 award. I hope to visit one day!

Food and wine have been a huge part of my life for years. Here’s a fabulous champagne lunch I experienced a few years back. And if you’re looking for great wine lists, head to these New York restaurants!

« Where to Hear Live Jazz in NYC
Millesima: A Wine Lover’s Destination on the Upper East Side »