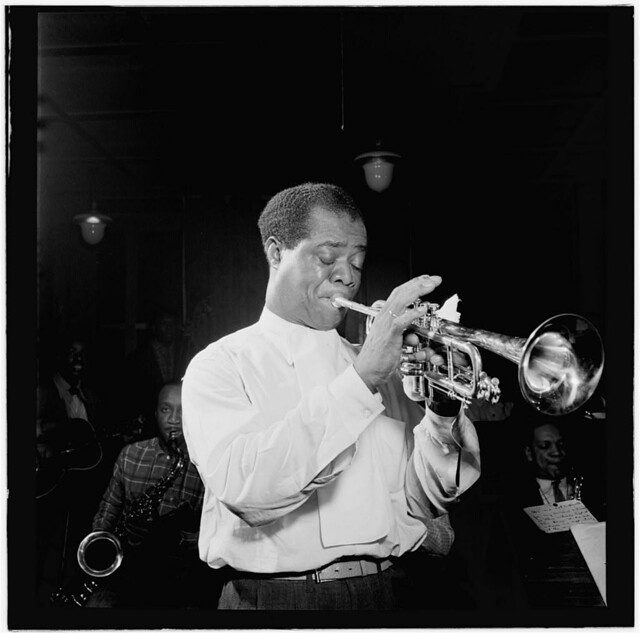 Louis Armstrong at Carnegie Hall, 1947–by Samkling via Flickr

New York City is considered the heart of the jazz scene by many music aficionados, with Manhattan taking center stage (think the Cotton Club and Blue Note). But you would never guess that some of the world’s greatest jazz musicians took up residence in Queens at some point in their lives. Ella Fitzgerald, the first lady of jazz, lived in the Addisleigh Park neighborhood of St. Albans, while John Coltrane lived for years on Mexico Street, also in St. Albans, as well as Count Basie. Other jazz luminaries who lived in the borough include Billie Holiday, Lena Horne, Benny Goodman and Glenn Miller.

But walking around the gritty neighborhood of Corona, Queens, it’s hard to envision that Louis Armstrong, and his wife Lucille, once lived at 34-56 107th Street, now the site of the Louis Armstrong House Museum. The museum pays homage to the legendary New Orleans-born jazz giant, who was known world over as “Satchmo.”

I had the pleasure of visiting the museum, which, I was told by museum staff, is both a city and national landmark. Thanks to its landmark status, the house, which the Armstrongs called home from 1943-1971, remains perfectly preserved, looking as it did during Louis and Lucille’s stay.

Museum-goers are escorted through a 40-minute fantastic guided tour, which starts every hour on the hour. Visitors get to hear various sound recordings, including Armstrong practicing his trumpet, and clips of a conversation between him and his wife. They even get to listen to Armstrong’s golden pipes sing a capella-style in his den. In addition, they’ll get the pleasure of viewing a collection of classic photographs, letters, manuscripts, instruments, and artifacts—a various treasure trove for diehard Satchmo fans.

While on the tour, the guide will toss out interesting Armstrong information such as his work as a civil rights activist, and his utmost love for Corona. Personally, I loved the picturesque Japanese-inspired garden, which I’ll return to see again during the springtime. According to the tour guide, the museum hosts outdoor jazz performances during the warmer months. I can’t wait to get a bit of a musical “Louis fix” on my next trip.

« New York Is…..
Basquiat Is Larger Than Life at the Gagosian »