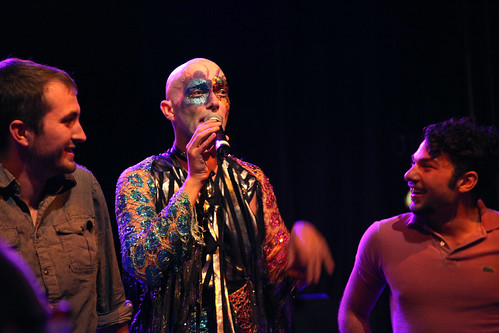 I’ve wanted to check out Joe’s Pub for years, and recently, gal pal Heather and I made a night of it, and we weren’t disappointed. It’s an intimate venue, with tables, booths, and a bar/counter along the small stage where we were stationed. Talk about a front row seat! But honestly there’s no bad seat in the house of this newly-renovated theater. The lobby is getting the same overhaul, and it will be brilliant once it’s completed.


Taylor Mac was the act for the evening. He is a character like I’ve never seen before, and I’m no stranger to the stage or theater. Diva, Broadway belter, costume mistress, comedienne, and the ultimate performer in drag who pushes everyone to their limit, Mac is intense and even vulgar. This show is not for the conservative or the homophobic. I had no idea what I was getting into when I showed up, but let’s just say I got more than I paid for.


Mac is one of the most talented, dynamic performers of our time. He uses the audience in a way that I haven’t seen in present day. His Ethel-Mermanesque croons were titillating  and more outrageous than the gaudy layers of glitter and shadow around his eyes. Mac is diverse, complex, and beyond funny. In one breath, he is crooning “By the Light of the Silvery Moon” to a naked ass from the roaring audience that is barely clothed in a G-string, and in the next number, a pin could be heard as he quieted the band to negative decibels with a somewhat serious monologue. He was fresh, unexpected, risque, and kept the packed audience in the palm of his manicured hands for two hours. 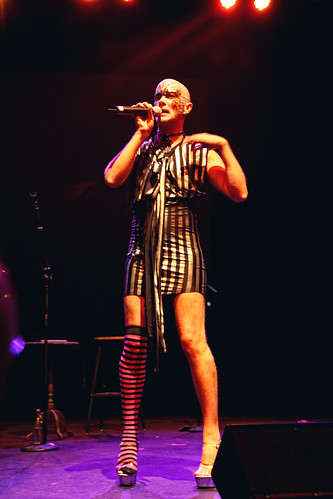 Music from the 1920s took us back in time, but the performance was present-day. Audience members were good sports and participated with somewhat reluctant enthusiasm. Mac had everyone’s best interest at heart, and pushed us beyond our comfort zone. Isn’t that what theatre is all about? The night was complete with delicious food and a bottle of wine in our front row seats.


Joe’s Pub was an ideal venue for Taylor Mac. Will he be back? You betcha. At Joe’s Pub on April 16th with music from the 40s, Mac will make us sweat and squirm in our seats again. I’ll be there.