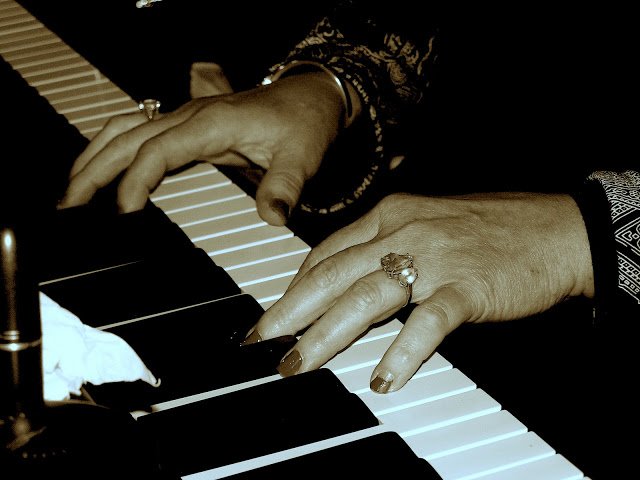 Life is a Cabaret. At least for Karen Brown. The songstress has been a regular performer in Manhattan bars and clubs since the 1970s.

I remember the first time I heard Karen in 1994 at the Hotel Edison. I became an immediate fan. Not only can Karen play and sing anything from the Classic American Songbook, but she is a star accompanist to both amateurs and professionals.

A graduate of the prestigious Berklee College of Music, Karen began her New York career entertaining guests at the Hilton’s Kismet Lounge for five years. This was followed by a permanent place at the Downtown Athletic Club for 17 years, and the Rum House in the Edison for 15 years. Pretty impressive history for this New York native.

Born and raised in Staten Island, Karen is a New Yorker through and through. Her long-time show at the Edison ended about two years ago when the bar lost its lease. Kind of ironic I would say since it had just been written up as one of the “Best Bars in America” by Esquire magazine.  The Rum House was also one of the only pianos bars left in New York. These are the breaks in this ever-changing tough city, the entertainment capital of the world.

I remember the night like it was yesterday. After the revival of West Side Story, we strolled over to hear Karen croon. We walked into the bar and the piano was gone and the bar was practically empty. Emotional, disappointed, confused…. This was a piece of  “My Old New York” that had remained. And now it was gone—just like that.


Karen was always there. After dinner or a show, or just because, I knew she would be at 47th and Broadway.  We had moved to our apartment on the west side just six weeks earlier, which is more convenient to the Theater District than the east side. I was looking forward to making lots of trips to the Rum House. Tuesday through Saturday each week, I could count on it. But now, I had no way to reach her.

Technology –– what did we ever do without it? I searched for months on the internet. Confident that I would find her playing somewhere, I never gave up. Eventually, about six or seven months later, I saw her fan page on Facebook. She had a new gig at last.


Karen now plays at a bar and restaurant called Tom and Toon on West 51st Street between Broadway and Eighth Avenue. She brings down the house on Tuesday, Saturday and Sunday every week.

Many fans from the the Rum House stop by to enjoy listening or sing a tune. I visit frequently.
From Sinatra to Cole Porter, to Nat King Cole and all the way to Billy Joel, Karen plays it all with grace and elegance. Although the surroundings are very different, the well-known voice and those classic songs we love remain the same. When you visit New York City, visit Karen Brown.

« All Creatures Great and Small
Revenge of the Butter Knife »