Less touristy things to do in NYC

In the ‘new’ New York, tourists frequent all five boroughs. With cleaner and safer streets, a plethora of sights to see and things to do for any age and budget, it’s no wonder the Big Apple is one of the most traveled destinations in the world.  Midtown, in particular, attracts scores of visitors due to its concentration of hotels and proximity to some of the city’s major attractions (think Empire State Building, Rockefeller Center, and Times Square). But know that this frenzied part of Manhattan offers much more than the iconic landmarks. That said, whether you’re a local, transplant or guest, it’s nice to be reminded of the multitude of choices we have in our great city. Here are five of my favorite less touristy things to do in NYC.

If you haven’t noticed, Bryant Park is an outdoor treasure, smack dab in the middle of Manhattan. Summertime is glorious with regular outdoor films and Broadway performances, not to mention locals drinking coffee, reading, working, and catching rays. In winter, though New Yorkers spend a little more time inside than they do in warmer months, Bryant Park should be enjoyed then too. The park is the home of the Bank of America Winter Village, which offers ice skating, (take lessons if you’re a novice), the holiday shops, Celsius (an awesome place to grab a bite or drink), as well as seasonal films like Miracle on 34th Street. In a nutshell, Bryant Park is fabulous at any time of the year.

Locals love the West 40s in Hell’s Kitchen for its ethnic eateries, and Ninth Avenue is especially popular for grabbing a nosh as you stumble either north or south. From Empanada Mama to Island Burgers & Shakes, and Room Service for delish (and spicy) Thai dishes, this Midtown West corridor will satiate the heartiest appetites and oddest food cravings. Bonus: Unlike neighboring Times Square, you won’t find chains along Ninth Avenue.

Meet for drinks at The Campbell.

Formerly the Campbell Apartment, this Grand Central Terminal speakeasy bar feels glamorous, and the interior is magnificent. Drinks aren’t inexpensive, but the ambiance alone warrants the high prices. You’ll feel as if you’ve stepped out of the Millennium and returned to the roaring twenties. The tavern’s somewhat secretive entrance makes this spot all the more alluring. Dress well or not. There’s no longer a dress code under new ownership, but I recommend leaving the trainers and tees in your closet.

Ride the Tram to Roosevelt Island.

I know you may be thinking this is somewhat for tourists (anything with a view attracts the masses), but I have friends who live on Roosevelt Island and use the tram almost every time they come into Manhattan. (You can also ride the F train but it’s not nearly as much fun or as pretty.) You’ll catch commuters mixed with visitors, and the view of Midtown and the 59th Street Bridge is unbelievably stunning.

Much less touristy than Broadway, New York City Center hosts top-notch dance companies, plays, musicals, and other performances year round. Dance Theatre of Harlem, Manhattan Theatre Club’s Lost in Lake, Encores! Lady Be Good, and regular showcases from Alvin Ailey American Dance Theater have all been performed here. Aside from the entertainment, the theater itself – which was built in 1923 in the Moorish Revival style – is spectacular and underwent a $75 million dollar renovation in 2010. City Center also happens to be on one of my favorite blocks in Midtown Manhattan: West 55th Street between Sixth and Seventh Avenues. A visit to City Center is definitely one of the less touristy things to do in NYC. 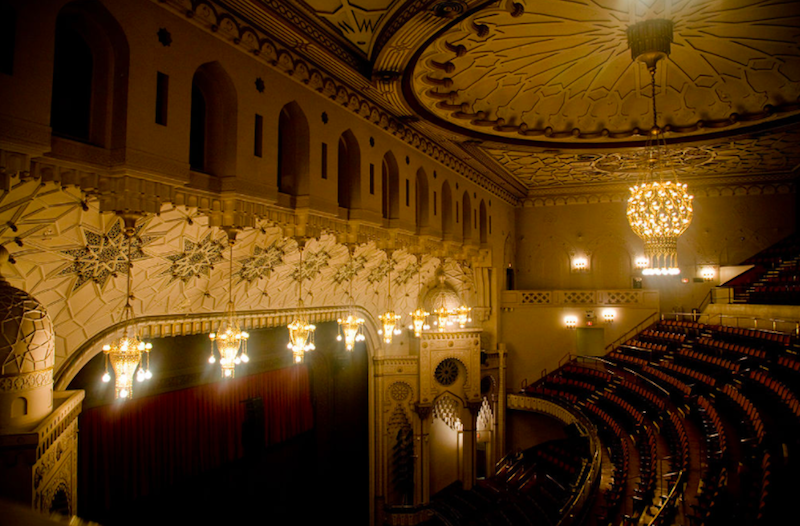 Campbell Apartment photo via the bar.

And, fun things to do in New York even though they’re touristy. (Even I’m guilty!)