Living with another human being day after day, and year after year for many years can be wonderful, but it can also be a trying experience. Tolerating their idiosyncrasies and annoying habits can be challenging in even the most ideal circumstances. Add marriage into the equation, and the relationship may become more complicated.

We all need our own personal space. Most married couples are able to designate a room of their own in their home. While living in a 2.5 room apartment in Manhattan, this can be difficult or nearly impossible.

I’ve found the secret to living in a small space is staying organized, avoiding clutter, and purging several times per year. Even while strictly adhering to this philosophy, difficulties still arise in 825 square feet.

Just like me, my husband likes lots of stuff. Big stuff. Little Stuff.  All kinds of stuff. He also has an ever-growing wardrobe now that he is a New Yorker. It used to be tools plus nuts and bolts.  He no longer needs these. Now it’s clothes plus shoes and hats.

In an effort to keep him organized, and keep me from getting nutty, shortly after we moved into our sprawling one bedroom, I gave him a little black box to store his personal items. These things include: a wallet, keys, a pocket knife, sunglasses, and a packet of chewing gum.  This little black box would stay on the buffet that is the main piece of furniture in our living room which is four steps from the foyer.

A short time went by, and the box became overstuffed. It began to overflow onto the beautiful new buffet, or it extended onto the dining room table. Frustration set in.

So I resolved this by getting a another box. The new black box is larger, and approximately 8×11 inches. So for the past year or so, hubby has been keeping the original items and any additional items tucked away neatly in his new black box. Fabulous.

A few weeks ago, I began to notice the overflowing again. I mentioned this in passing. He resolved the issue by purging. And alas, all of his tchotchkes fit! Now just a short time later, the box is bulging and is barely able to close.

Last night, I asked, “What is going on with the box?” I opened it and found that the contents included: three pairs of glasses, a battery charger, several pieces of mail, currency, two pocket knives, and a CD. This is in additional to the wallet, keys, gum, etc. from the original box! It’s no surprise the box won’t latch. 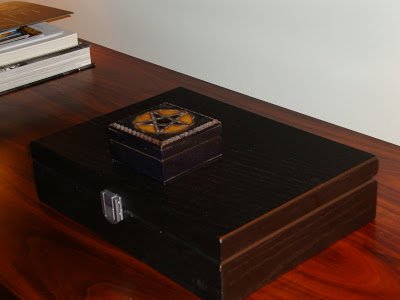 I must admit, I like things put in their place 24/7. I really like for our apartment to be clean, tidy, and never in disarray. I love coming home to fluffed pillows and seat cushions, and I enjoy the smell of Murphy’s oil soap. This is one of my many quirks, just like my addiction to shoes. But, I’m very honest and I communicate this quite well.

Last night, during the discussion, Michael commented that I have a jewelry drawer in my closet. My response was appropriate. “I am a woman with jewelry! What jewelry do you have besides your watches, which should stay in your closet?”

His response however was correct, “My wedding ring!” 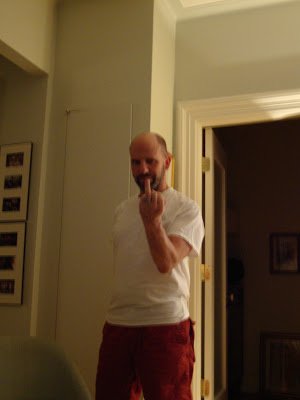 In order to resolve this quickly, he will now have a small black ring box. Since I know this is the one item that sent the overflowing goods over the top to the furniture, this was an easy fix. Now all is tucked inside again which calms my nuttiness that I previously mentioned.

We’re currently on the waiting list for that in-demand storage unit in our basement. If only the wait was over, we would have plenty of space for all of our extra belongings, just like every other New Yorker.

When it comes to lasting relationships, they aren’t all that different from the black box, or the one bedroom apartment.  Every so often, we need to stop and evaluate, adjust, choose what’s most important, purge, and everything will fit into place once again.

« It Sucks To Be Me
Barbara the Great »