It’s been unseasonably cool over the past week in New York. Yesterday morning, I needed a down jacket to keep the chilly wind from penetrating my bones. While Bogey and I were out for our walk in the afternoon, it had warmed up, but a coat was still preferable.


Riverside Drive is the windiest street in all of Manhattan; it runs along the Hudson River. It’s charming and beautiful, but can easily feel 5-10 degrees colder than one block East on West End, where I live.


As we were trotting along the outside of the park, I saw a young fashion maven ahead. Walking in front of her mother, she appeared to be about 7 or 8 years old. I noticed her initially because her mama was scolding, “Look! She has a coat and a scarf,” pointing directly at me. “She has a coat and a hat,” referring to another woman. “He has a coat and blah blah blah…..”, and so on and so forth, using perfect strangers as examples to prove her point.


The little version of Zooey Deschanel looked chic sporting a bright yellow jumper with a brighter red shrug, navy blue tights, and red shoes to match the shrug. Her jet-black hair was flouncing in the breeze, and she didn’t appear chilled. Momma Deschanel was reprimanding the little girl’s refusal to wear any outerwear.  Zooey didn’t mind, and ignored her mother’s words.  She kept skipping along with her head held high, looking glamorous and ready for a prime time television show in the 9 p.m. time slot.


Can’t say that I blame her. Have you ever worn an outfit so stylish, you refused to cover it?


Remember back to your childhood, when your mother made you dress in something that you despised, and only because of the weather? Or because she thought you looked cute? That word can have many meanings….


I rebelled. As soon as I was old enough to choose my attire, I began wearing crazy things like an unlined leather jacket and no socks in subzero temperatures; or a black bra and a bolero jacket with my chest and midriff exposed. My favorites were the MC Hammer pants, black patent vinyl shoes with poofy chiffon laces, and a sailor hat during my fly girl days. I was twenty-something and my defiance felt liberating.


My mother only wished that my clothing choices looked like Zooey Deschanel’s. My style was different then. And besides, I didn’t have the lashes. 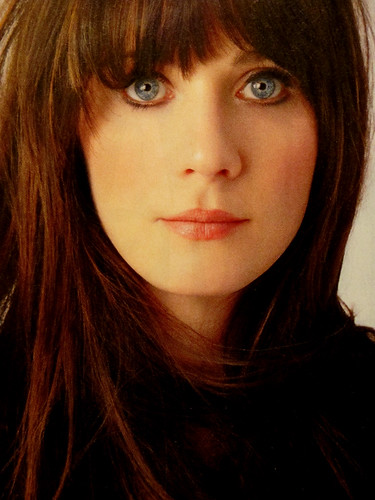 You can bet that outfit from this mini fashionista is permanently embedded in my brain.
I’ve already got the red shrug in my closet, and I’m still young enough to pull off navy blue tights.  Now, the search for the bright yellow jumper….

« Read. Review. Rewrite.
Patience is a Virtue, Especially in This Town »