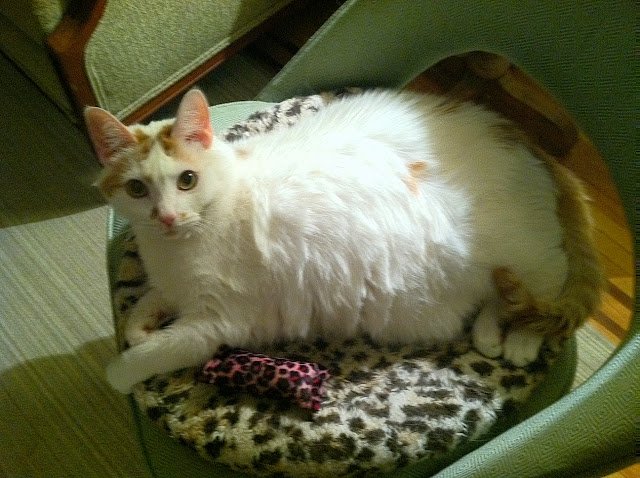 I often question what indoor cats really think about. What do they like about their lives? Rumor has it they have nine. Are they happy and content, or bored and stifled? Do they miss the great outdoors, or think it is a much better world between four walls?

In Manhattan, cats must live in unusually small spaces. Most felines are pretty adaptable, but even so, it cannot be terribly exciting to never have a change of scenery other than the occasional vet visit.  And really what feline likes that anyhow? Apartment living can give cabin fever to a human, and a feline is no different.

My cat Mimi has developed a sudden curiosity for the hall of the eighth floor. She began wondering what life would be like outside of her abode when returning from a trip to see grandma about a year ago. Now it seems, that every time Mimi comes home from a vacation, she has the urge to wander. So much so, that she sits at the front door (almost touching it with her pink nose) and cries at the top of her lungs until I open it.

Mimi-Kitty has now incorporated this behavior into her daily routine. When the door does open, she will run out as quickly as possible, and land a few inches from the door on the mat. She may stroll to the neighbor’s and sniff, but then she’ll lie down like she is relieved to enter a new territory. Strange I know, but she is a cat after all.

She enjoys travel, especially with her bigger, but younger bro, Bogey. Last year, we went to a Blessing of the Animals ceremony in the neighborhood. She enjoyed every moment of it.

Our trip to Maine last month certainly didn’t help matters. Mimi practically had an entire house to herself. Plus, she was able to explore the porch off the master bedroom. She got to smell the great outdoors again —it’s been four long years since she’s been outside. In Atlanta, she spent hours each day on our screened porch, even in the steamy Georgia summers.

I’ve decided to support this feline behavior and train Mimi to the leash. She’s been observing dogs on a leash for her entire life. First it was Jake, and now it’s Bogey. She’s a smart cat. She’ll put two and two together and figure it out. ‘Hmm-if I wear this thing around my neck, then I can get out of this shoebox and maybe even escape —purrrrfect!’

The rule will be as follows: Whenever Mimi wants to go for a little walk beyond the front door, she will be permitted with her collar and leash.  Thus far as you can see, this isn’t working.
Mimi has been religiously doing the South Beach diet for over a year now, and has lost quiet a bit of kitty weight.  Although she still suffers from food-obsession, I am quite proud of her determination and self-control. She is also pleased with her new figure. But she still has a bit of toning up in her future, so a workout would do her good.
Many vets recommend taking your cat outdoors if possible for stimulation and exercise. Now that she is middle-aged, there is no better time than the present to increase her aerobic activity. If only she could get more of a workout beyond walking to the kitchen for food, and climbing into the litter box; that kitty pooch would disappear in no time.