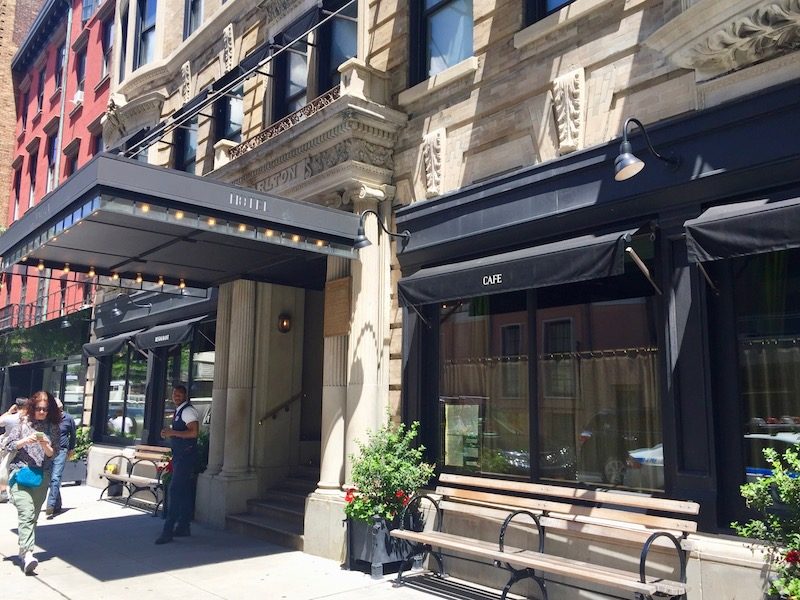 Imagine flashing back to the early 20th century in Greenwich Village, or experiencing even a glimmer of what the neighborhood might have felt like in the 1960s. Picture yourself sleeping in the same room as Jack Kerouac or Lillian Gish. The star of stage and screen lived in room 408 at The Marlton Hotel, one of the Village’s hidden gems that I discovered and stayed in for a night.

Truth be told, this circa 1900 hotel was once an SRO (Single Room Occupancy), so its past was far from luxurious, but it always had a soul. The Marlton attracted some of the most famed writers of the Beat Generation – apparently, Kerouac wrote The Subterraneans and Tristessa while staying there. And even though the structure has been completely refurbished, the spirit of that period still lingers.

Make no mistake, with the exception of the penthouse suite, the guest rooms are small. But the modest spaces are well-designed and comfortable. My queen bed was plush with monogrammed bedding. The closet was large enough to fit my suitcase, which is a huge plus in a tiny room. The baths are a good size and covered in marble. They offer modern conveniences yet feel true to the period of the building. 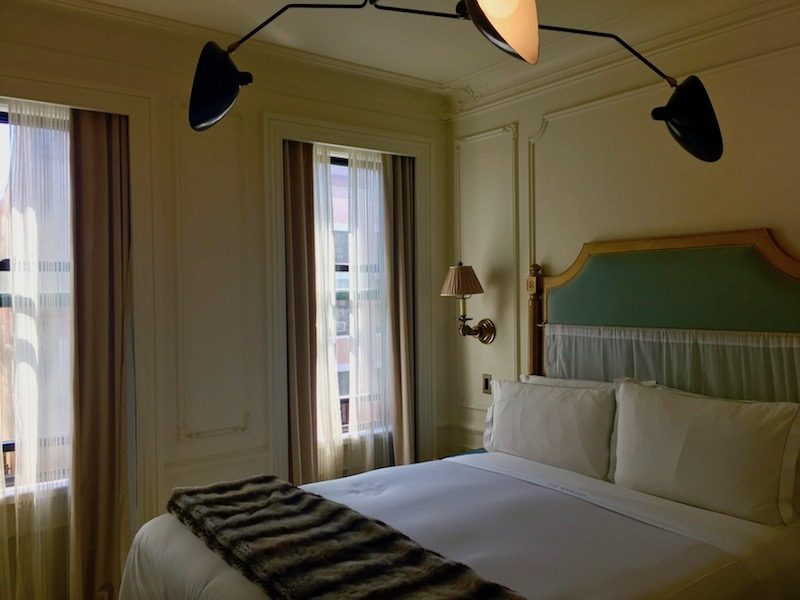 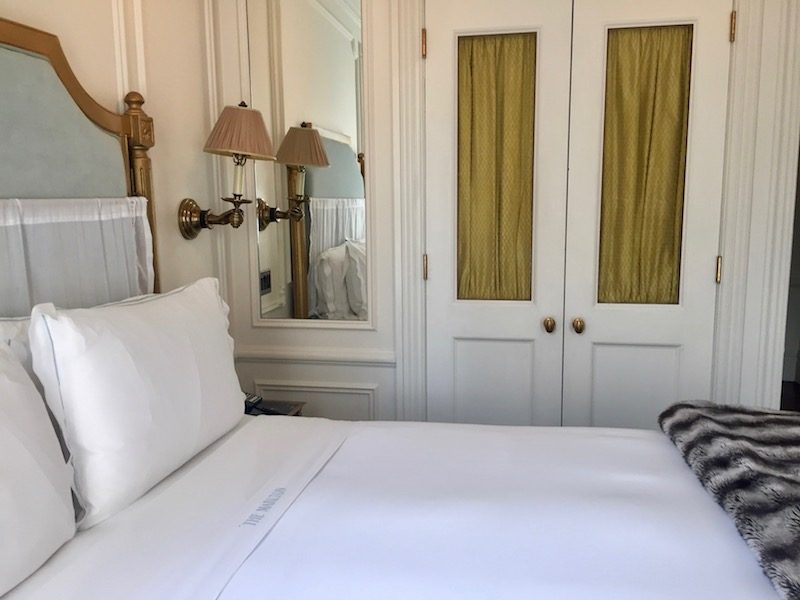 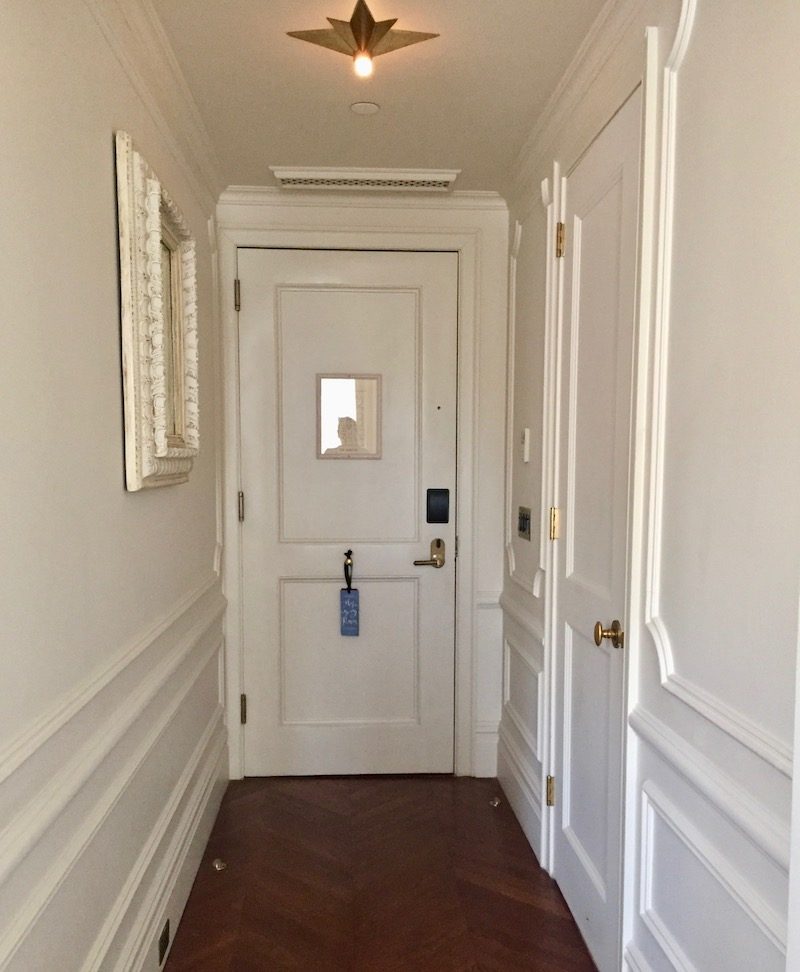 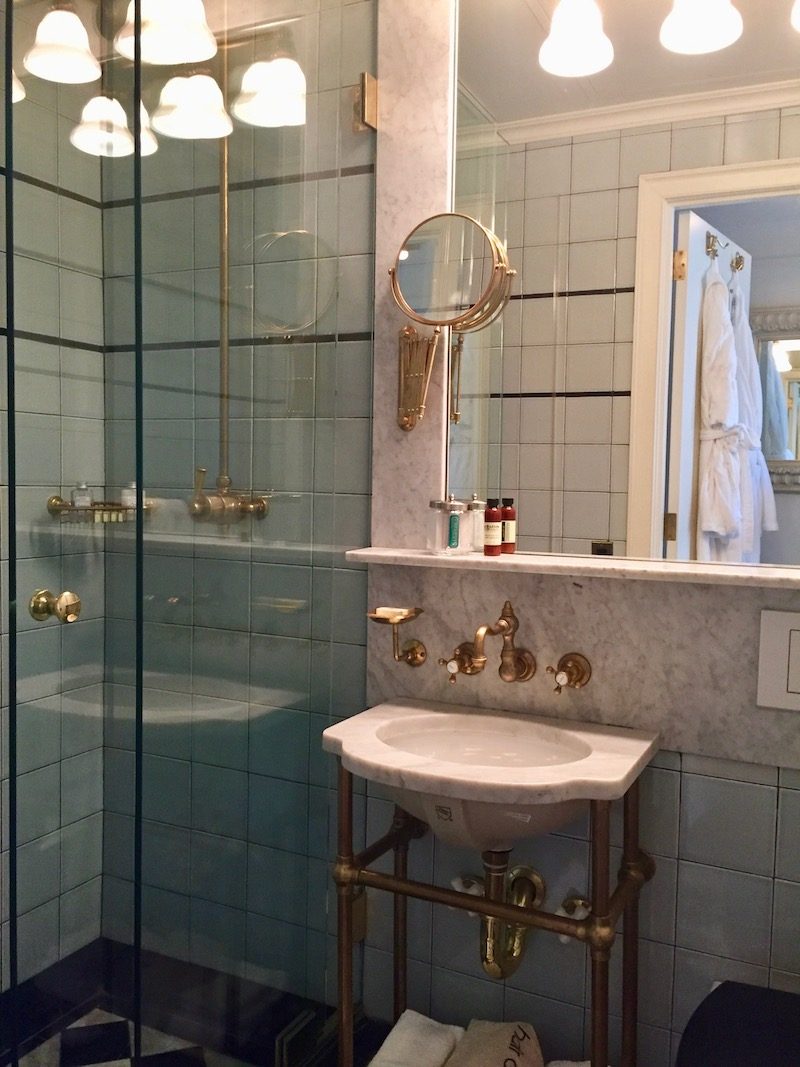 I’m not sure that I would’ve been comfortable if I was sharing the room with another person. I think the room-size would’ve been too tight, but The Marlton worked well for me alone.

One of the greatest aspects of this hotel is the lobby. The space feels like a drawing room or library in a 19th-century townhouse rather than a public space. In other words, it feels like home. 🙂 There’s plenty of lounge seating as well as tables for workspace, and the lobby connects to the bar, which leads to the dining room in Margaux, the on-site restaurant. 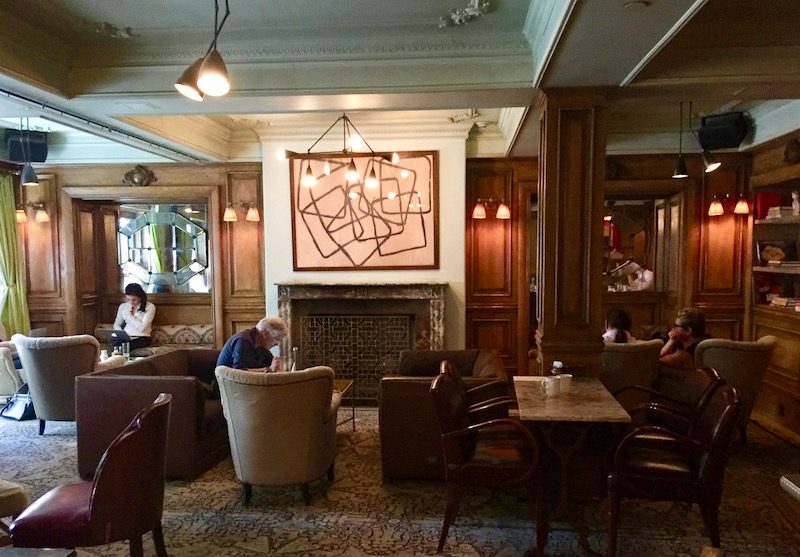 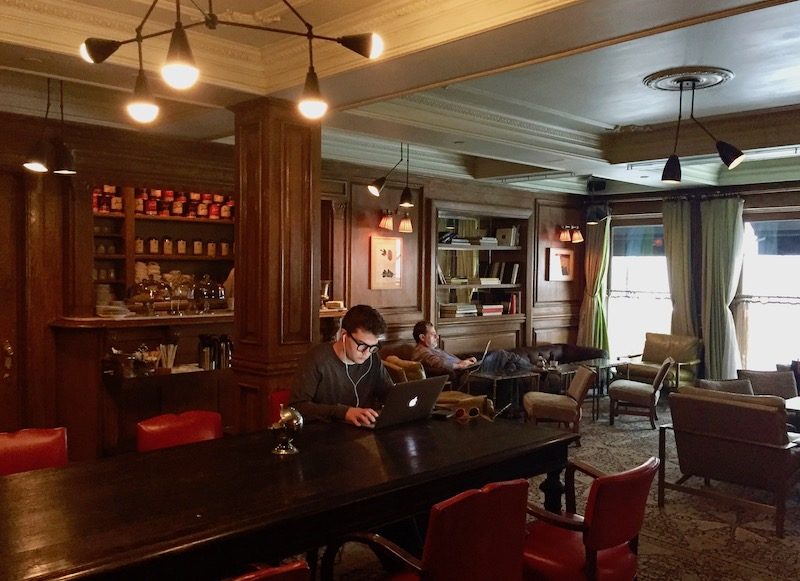 I enjoyed both of my meals at Margaux, and for me,  a solid bar and restaurant is a must when I choose a hotel. When traveling, we all have those nights when we’re tired and hungry and it’s late, or we just want a nightcap before bed and don’t want the exorbitant minibar charges tacked onto the room bill. Plus, Margaux’s space is charming and has a European feel. It’s not a bright space, but the sunroom is! And you can dine in there when it’s open. I believe it’s usually open during the day and not so much at night unless the restaurant is super busy.

You’ll read mixed reviews about Margaux on Yelp (almost all reviews on Yelp are mixed), but I can’t say anything bad about the food or service. I do think it’s a bit pricey, but it’s in a trendy hotel in Greenwich Village and draws a fashionable crowd, so I was not surprised by the prices. 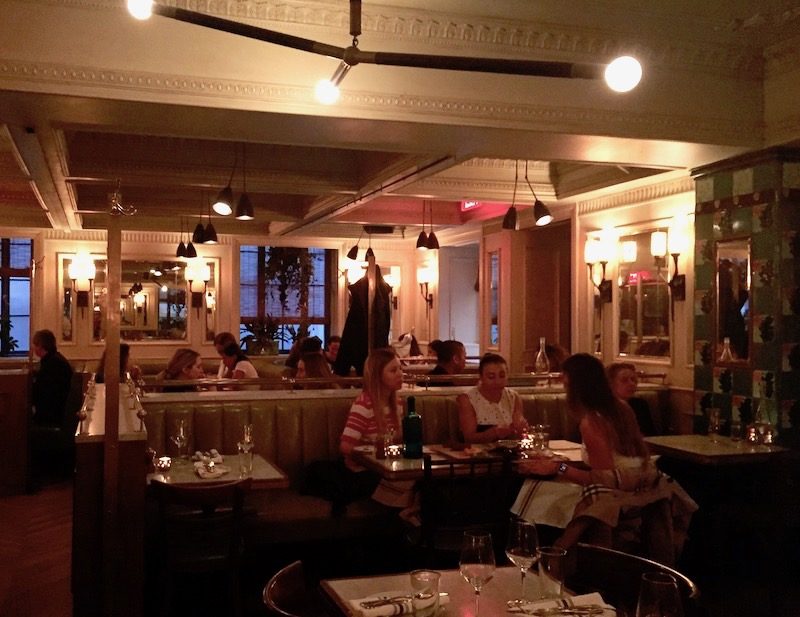 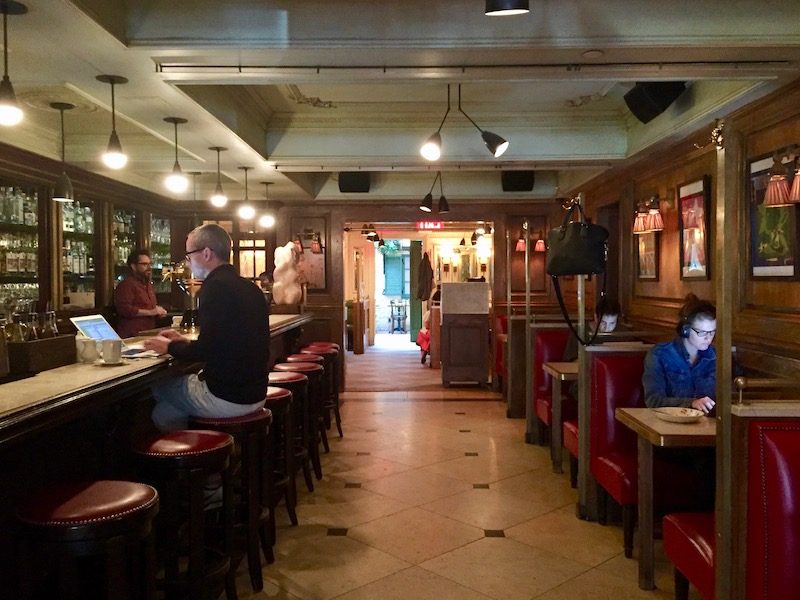 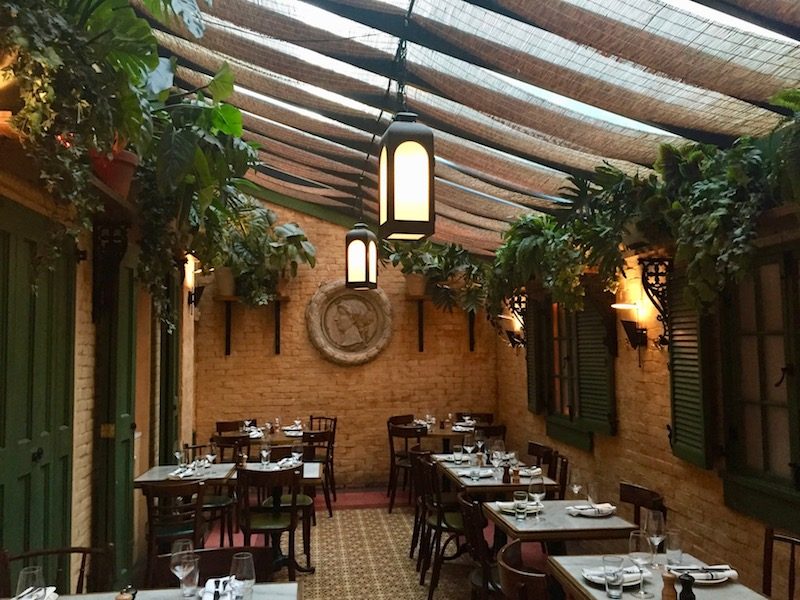 And well, the location of The Marlton Hotel is about as good as it gets. Washington Square Park is (literally) right around the corner. Stroll to Fifth Avenue and turn right and you’ll set your sights on that grand arch. Who wouldn’t love that amenity?

For more about The Marlton Hotel in NYC, check out my full review in The Telegraph. 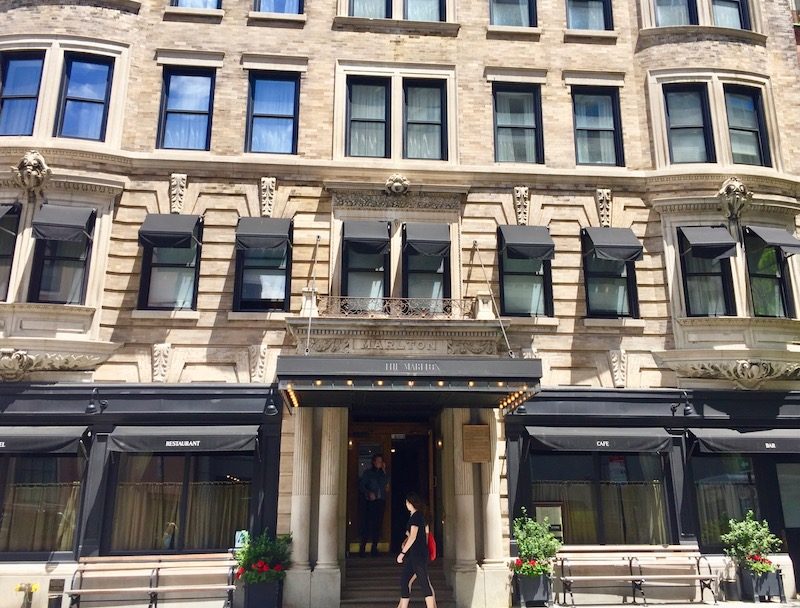 I review hotels for The UK Telegraph. All rooms and meals are complimentary.

Also, unique hotels to try in NYC and Hotel Americano, a hip hotel near the High Line.