“How do you measure a year in the life?” asks the musical, Rent, which was my mantra as a teenager.  Now as an adult, it’s never been more relevant.  I wonder, how do you measure 30 years?  In auditions, in rejections, in curtain calls, in children’s theater?  In subway rides, showmances, in paychecks, in gigs?


Living in New York City, it’s very easy to set your eye on the prize and block out everything else, just as the skyscrapers block out the sky. You start to neglect friendships; you visit your family less and less often;  and you give up on dating because you’re too career focused.  You spend so much time looking to the future and the next step that you lose sight of the past and everything that led you here.  Your mind is like the A train going express on its track. Sound familiar? I am guilty of all of these things.  I have become so consumed by the pursuit of the dream that I have forgotten the point of it all.  Luckily, on May 13, I was reminded.

The day of my dreaded 30th birthday was to be spent at a rehearsal in the morning, a dinner with the family from 6pm-9pm, and then the obligatory bar party with friends — the kind where you drink tequila and jager shots all night until you forget your name and how old you are.  (25, again…right?) I had been feeling down because my dream job in Showgirls, the Musical! would be over in a month, and I would again be unemployed, just a number on an audition line amongst young twentysomethings.

When 6pm rolled around, I met my father on the street corner so he could lead me to the secret destination.  We arrived at Don’t Tell Mama, a piano bar on Restaurant Row where I’ve performed since I was 18 years old.  Had they rented out the place so I could perform for the patrons?  That’s not fun, I thought to myself.  That’s just work.

I was escorted into the back cabaret room to meet the rest of my “family.”  The door swung open.  “SURPRISE!” shouted my family, PLUS  all of my closest friends past and present, the entire cast of Showgirls, the Musical! my favorite Broadway stars from “Rent,” and even my high school chorus teacher who had flown 800 miles the night before from North Carolina.  My surprise was palpable.

However, the mass gathering wasn’t even the main event.  This wasn’t just a party.  It was a  C.P.R. “A Command Performance for Rori” (a term coined by my parents). My friends had secretly been rehearsing for weeks, over Skype and in every borough of New York, to prepare a personalized concert for me.


My roommate, dressed in full drag (He’s a professional.  Ah, New York!) took the stage as the emcee to introduce the acts.  First, an old high school friend from the drama club broke out into a medley of songs from all the leads I performed as a teenager in the school musicals, complete with props!  She used pearls for Adelaide in Guys and Dolls, and a lei for Bloody Mary in South Pacific (which I performed in black face…)  Next up was my usually shy sister, a gladiator helmet on her head and a trumpet in her hand.  She tooted and shimmied her way through “You Gotta Get a Gimmick,” my signature number from Gypsy, as she had taught me how to play the trumpet when I got cast in the role.

Then, the Broadway stars serenaded me with a duet, of “Dog and Butterfly,” a Heart song that I had heard them sing back at the original Cutting Room over a decade ago when Rent was in its heyday.

For the grand finale, a friend whipped out his guitar and began to sing a song that  I had written.  One by one, friends stood up in the audience to belt out their solos, then made their way to the stage, their voices soaring in harmony:

“Wherever you go on your journey/Wherever life takes you, and if you should forget about me/Know the world has changed from your energy/And I will remember, today’s the day you came to be…”  It was a song I had written for someone that I had loved, now being sung to me by people who loved ME.

By this point, I was bawling. There was more love in that room than could be contained by the four walls.  Here were the people I had unintentionally ignored and pushed away over the years while I was hard at work. And yet, they still loved me – still believed in me.  They made me think back to the little girl on Broadway who swore to herself that she would NEVER give up, to the teenager doing community theater who just wanted to get to NYC, and to all the youthful optimism that had somehow gotten lost along the way.

None of the musicians or celebrity guests had asked for money to perform.  They were there for the joy of being on stage and sharing their gift.  All of my bitterness about the business melted away.  All of the sour memories from bad tours and backstage dramas and heartbreaks were stripped from my mind.  I was reminded that despite everything, I was born to perform.  It’s not about the job or the paycheck or the review or the amount of exposure.  It is simply about love – loving the journey and all the people you encounter along the way.  It takes a village to lead this lifestyle of sacrifice and discipline.  If I succeed, it will be because of them and their faith in me.

I will never again take for granted the support system that surrounds me. Sure, there are many more pitfalls to come- “Showgirls…” will close; I will be turned down for dream roles and I will get burned out working ceaselessly for that elusive Equity card.  At least now, no matter what, I will always be able to look back on this day and remember to “…measure in love.” 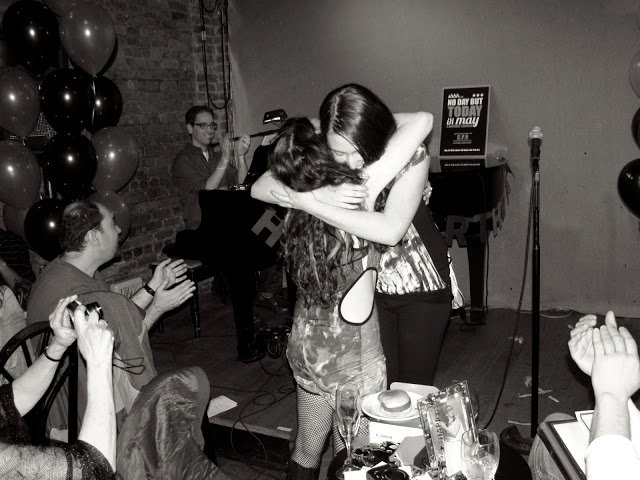 « The Best Cheesecake I’ve Ever Eaten
To Market We Go! Keeping It Fresh at NYC Greenmarkets »