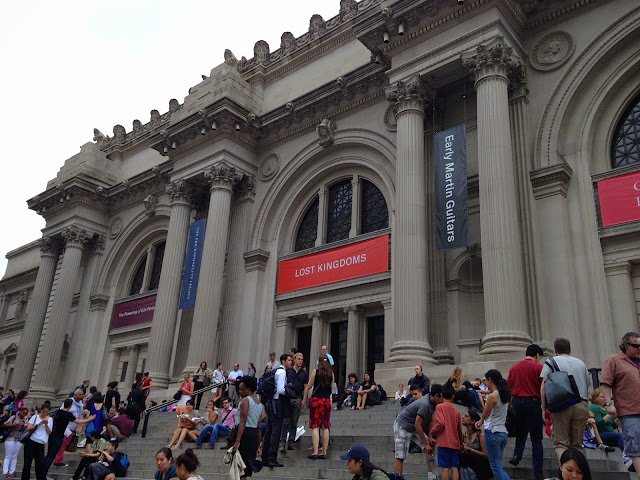 Out of all the museums and galleries in New York City, the Metropolitan Museum of Art is tops in my book. Not only is the building itself a stunning work of architecture, but there’s something calming – even inspiring – about spending time in the museum, surrounded by more exhibits than I could possibly see in one day. Taking a walk over to Fifth Avenue to pay the Met a visit is one of my fail-proof ways to decompress. These are some of the best exhibits at the Met.

Egyptian Art
I’ve always thought there was something magical about ancient Egypt, and the week I spent there during college spring break is still one of the best times I’ve ever had. So I love being able to revisit that experience, even if only a little, by walking around the Egyptian exhibit at the Met.

Some of the artifacts include heavily ornamented sarcophaguses, papyrus paintings, statues (Anubis, the god/warrior dude with the jackal head, is my personal favorite), and ruins. The mummies still creep me out, but in a good way.

Greek and Roman Art
This exhibit features a beautiful array of white marble statues, pottery, bronze works, and paintings that span the prehistoric through Hellenistic periods of ancient Greece, as well as the Roman Empire. You’ll also see pieces from Cyprus and Etruria.

Asian Art
The Asian exhibit is massive, from the size of the collection to the size of some of the displays. China, Japan, Korea, South, and Southeast Asia are all represented, although China and Japan have the largest sections.

Visitors can see works such as paintings, silk screens, textiles, lacquer, jades, and calligraphy. The two pieces that stand out to me are a towering statue of Buddha in the middle of one of the rooms, as well as a large-scale Chinese mural that takes up an entire wall.

Arts of Africa, Oceania, and the Americas
I enjoy browsing around this section, just because I like the fact that “my people” from the Pacific Islands are represented. Most of the exhibit is comprised of wood and stone pieces (we have to work with what we’ve got), and it’s a relatively small part of the museum. But it’s an interesting display, nonetheless.

European Paintings and Sculpture
The Met’s European exhibit is nothing short of extraordinary, and I love every bit of it. I’m obsessed, however, with impressionist painters and can’t get enough of Monet, Renoir, and Degas. I’m a closet art history nerd, and I consider the impressionist era to be my specialty.

I could stare at Monet’s “Water Lilies” for hours. Renoir’s painting of three little girls around the piano (my favorite when I was a kid) inspires me, and the collection of Degas’ ballet dancer paintings is a beautiful representation of 19th century French culture. I almost screamed when I first saw his sculpture of The Little Fourteen-Year-Old Dancer – a statue I had seen in multiple history books. Classy Met Museum behavior, I know.

What’s wonderful about the Metropolitan, is that there’s something for everyone to enjoy. Not a fan of traditional paintings and sculpture? You’ll discover more than enough artifacts from all over the world. If that sounds boring, you’ll find exhibits dedicated to fashion, photography, musical instruments, and more. The Met also features more exhibition specials than anywhere else in the world. So if you’re passing through the Upper East Side, I strongly suggest stopping by.

For more info on the Metropolitan Museum of Art, visit the website.