Each year since 1974, the Greenwich Village Halloween parade takes place on Halloween night. With 50,000 participants, two million spectators, and a worldwide audience of 100 million people, this could be called the event of the year for New Yorkers and Halloween lovers around the world. It’s creative with a diverse group of people organizing and marching. It’s also a family affair, with adults and children alike.

This year, my friend Heather and I will join hubby Mike and 97 other New Yorkers in the “Zombie Afterlife” as we perform the always magical, ever soulful, yet frightening dance by Michael Jackson with choreography by Michael Peters.  “Thriller NYC” is the highlight of the evening. Mike has done it for the past two years, and I can vouch for this. The crowds cheer for this part of the parade more than any other. It is quite theatrical!

The march will begin at Spring Street in SoHo and move North up Sixth Avenue to 17th Street in Chelsea. It will be approximately one hour of non-stop monster-walking, hip-pulsing, finger-snapping and crotch-grabbing; if I feel compelled to crotch-grab. Actually, this is an optional part of the choreography—whew!

Ultimately, this is a tribute to the legendary “King of Pop” himself, as well as a tradition in New York City, now in its 7th year. We feel honored to be a part of it.

What kind of zombies will we be? The bloody details are still being worked out. A trip to Ricky’s and we will most definitely be evil as our inner zombies emerge. Next zombie update will be the night of the living dead.

For New Yorkers, the Halloween parade will be broadcast live on NY1. 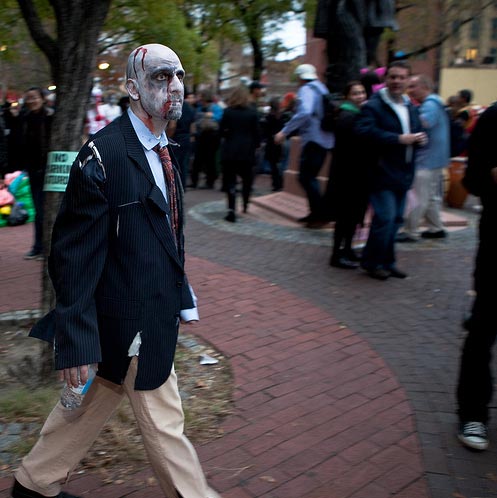