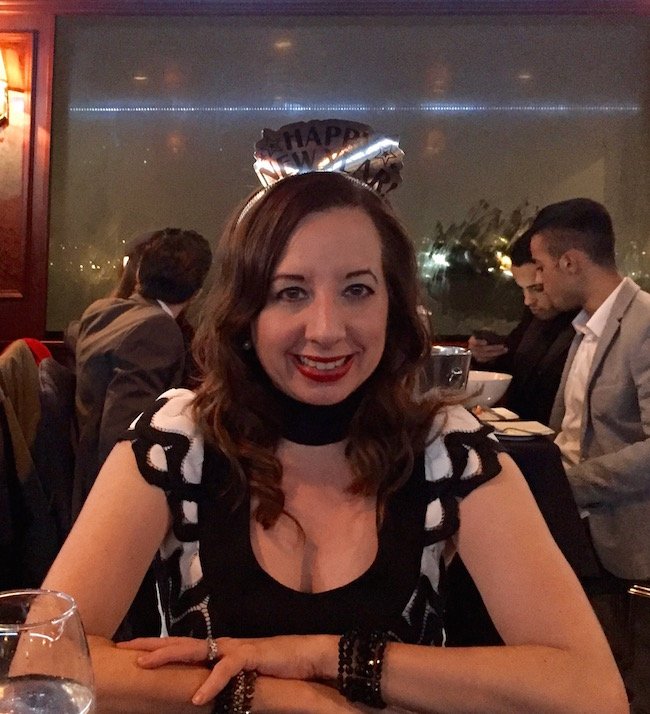 It feels great to be back after a week off. I hope everyone had a wonderful holiday. My Christmas was low-key, as usual, but my New Year’s Eve was just the opposite. Mike and I cruised on the  Hornblower Esprit for the evening. We started off 2016 in New York City in style. We’ve never experienced a big night out with an elaborate dinner and dancing on New Year’s Eve before, (usually, we dine and drink at a favorite spot), so I was thrilled when the folks from Hornblower invited us to try the Elite Cruise. After being together for more than 17 years, special date nights are more important than ever. Our NYE evening went like this….

We got all gussied up, hopped on the 1 train, and headed downtown around 7:15 p.m. 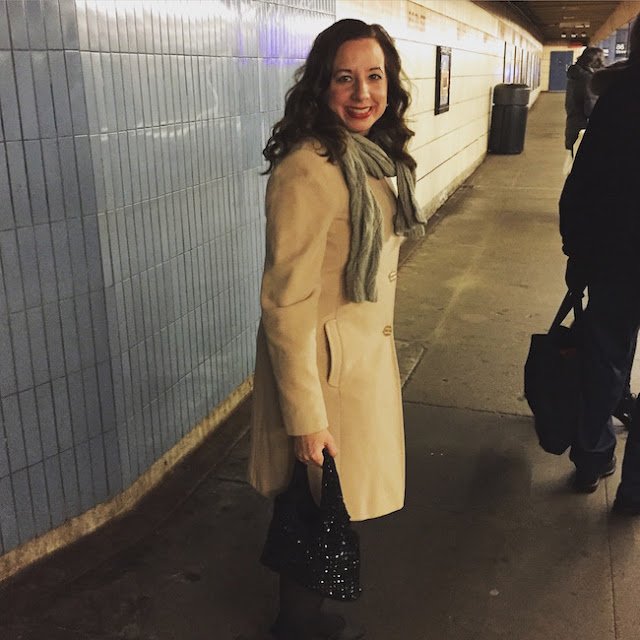 The dinner cruise was scheduled to depart at 9 p.m. from Pier 40 in the West Village. We boarded about 8:15, and were escorted to our table on the lower level of the two-floor ship, where we docked and then took off on time. Mike and I met partygoers from Italy, Venezuela, England, and Spain. 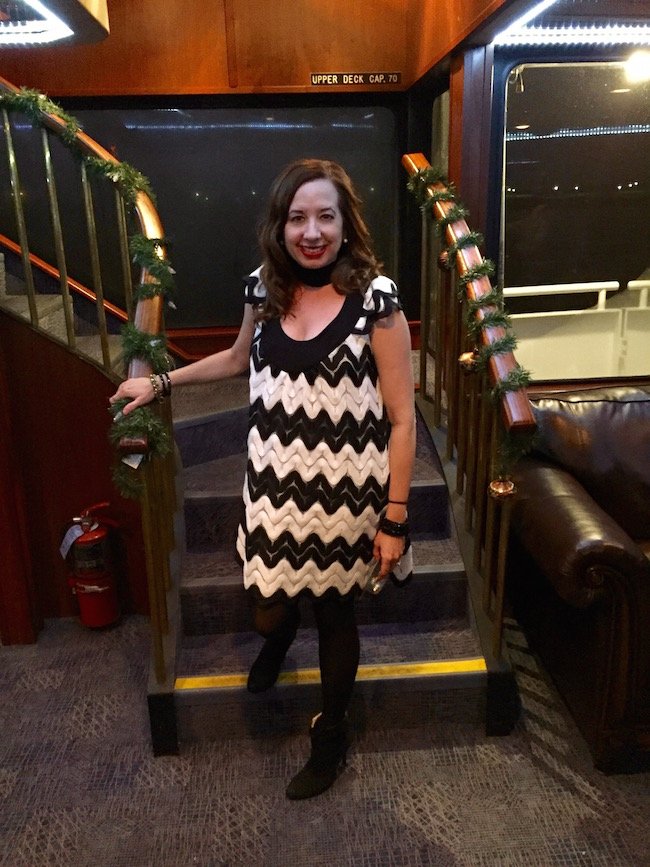 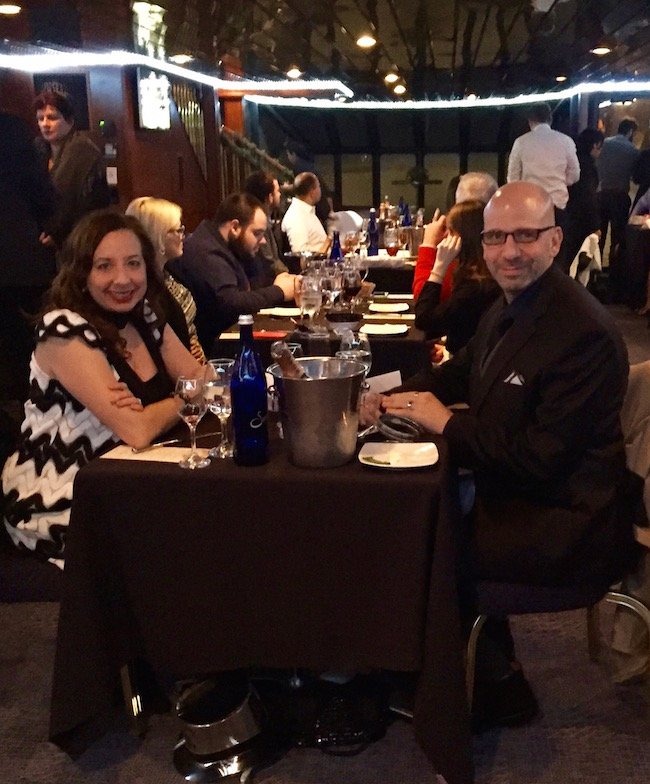 We began our seven-course feast with a plate of blinis and caviar, and Moët & Chandon Rosé Champagne! 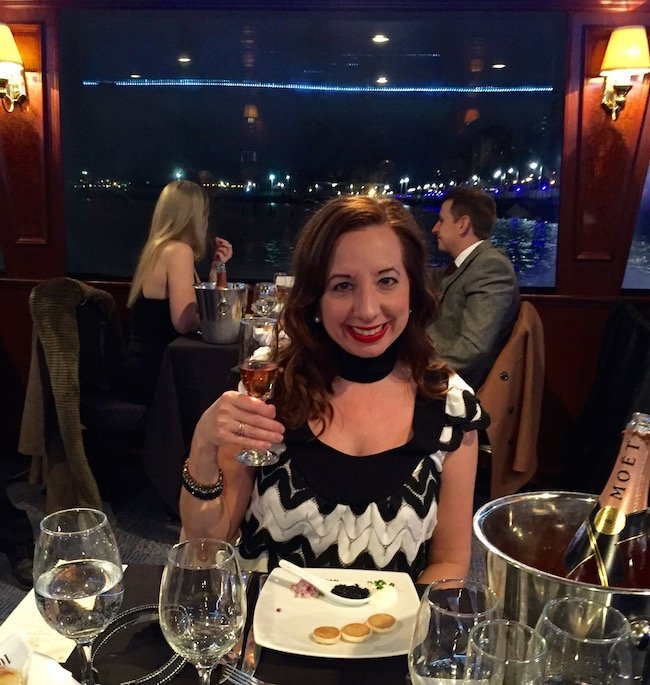 From there, we indulged in six other courses, such as a seafood platter, agnolotta di quattro formaggi, and surf & turf with filet mignon and stuffed lobster tail, and relaxed with classic tunes from Frank Sinatra.

The ship has a dining area on both floors, and a lounge area with oversized, comfy leather club chairs on the lower level. The cruise was sold out, but we had plenty of space to move about both inside and out. Even though we felt the vessel rock now and then, we found the ship to be very comfortable. 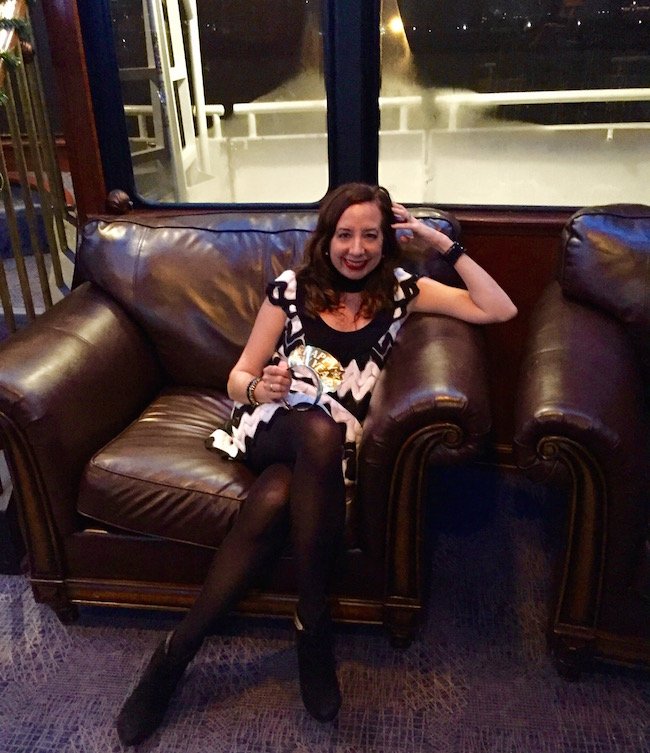 During and after dinner, we snuck out to the deck to snap photos and take in the spectacular views. It was a chilly night with temperatures hovering around 40 degrees. The water felt colder than the city too, but I had to capture the moments and the skyline, not to mention the fireworks over Lady Liberty at midnight. 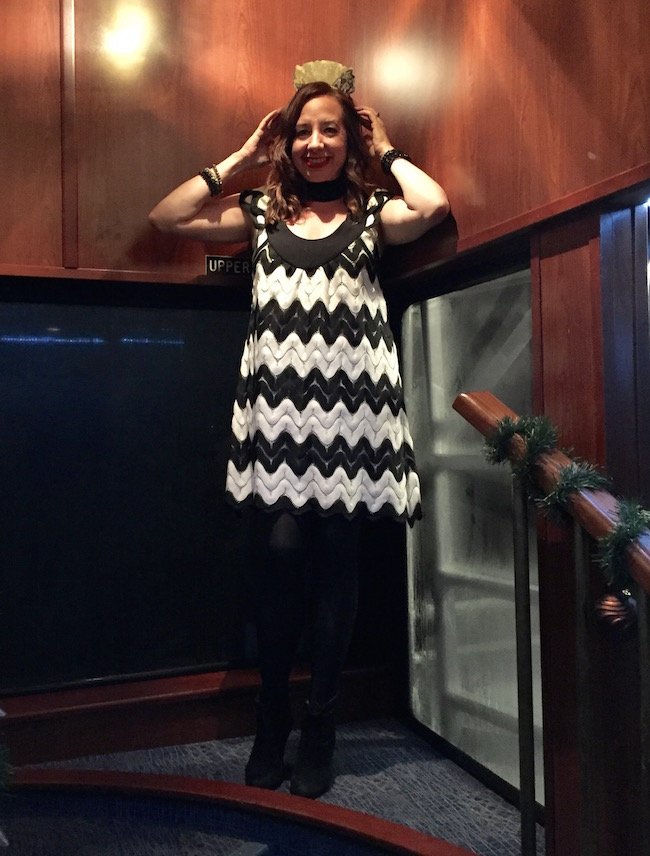 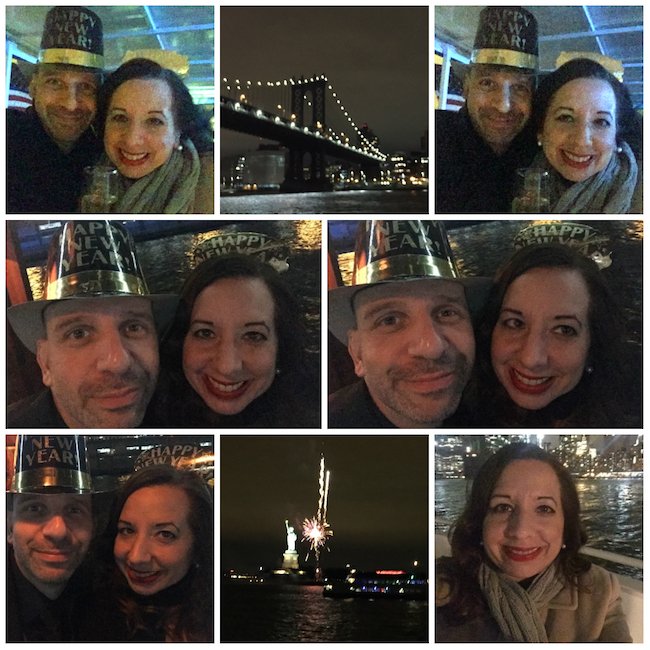 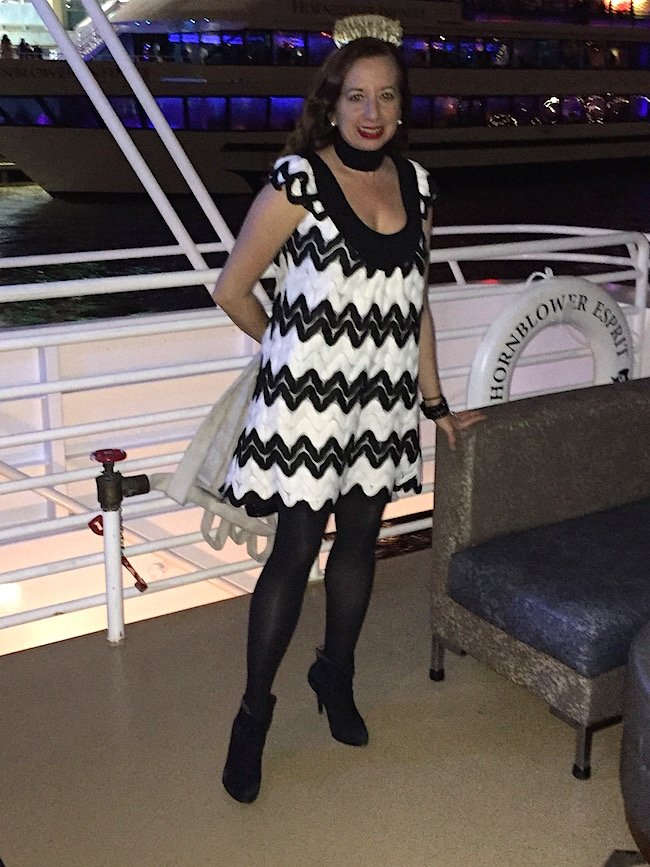 After the clock struck midnight, dancing took over the upper level. Even the ship’s staff partied with us. I’m glad Mike wore his dancing shoes. We had a blast. 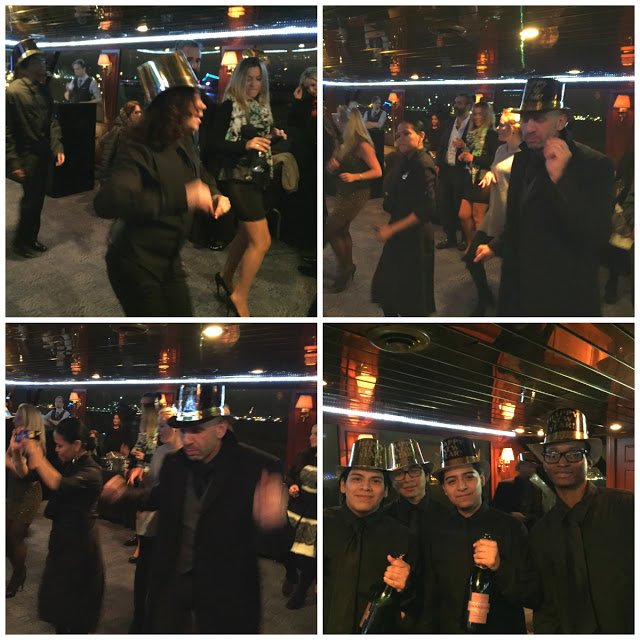 The night came to an end too quickly. We bid farewell to the Hornblower Esprit and made our way back to the Upper West Side. Here’s looking at you, 2016! 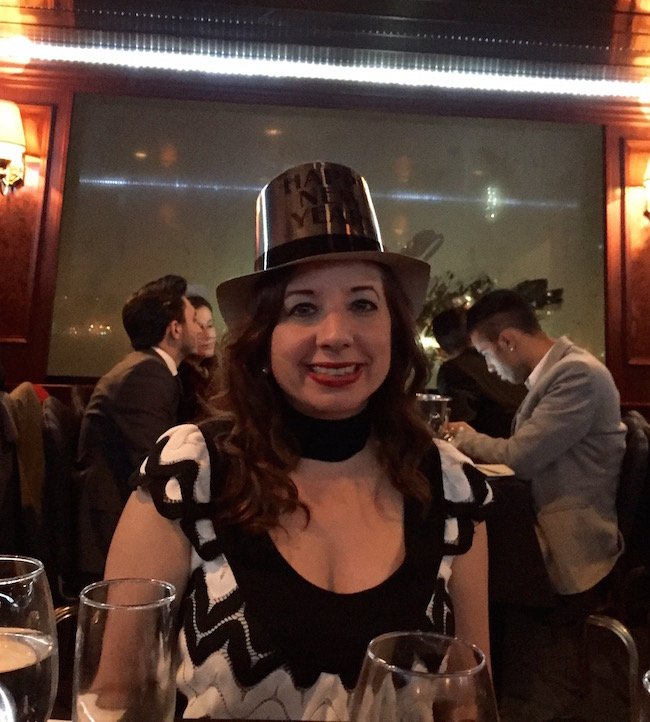 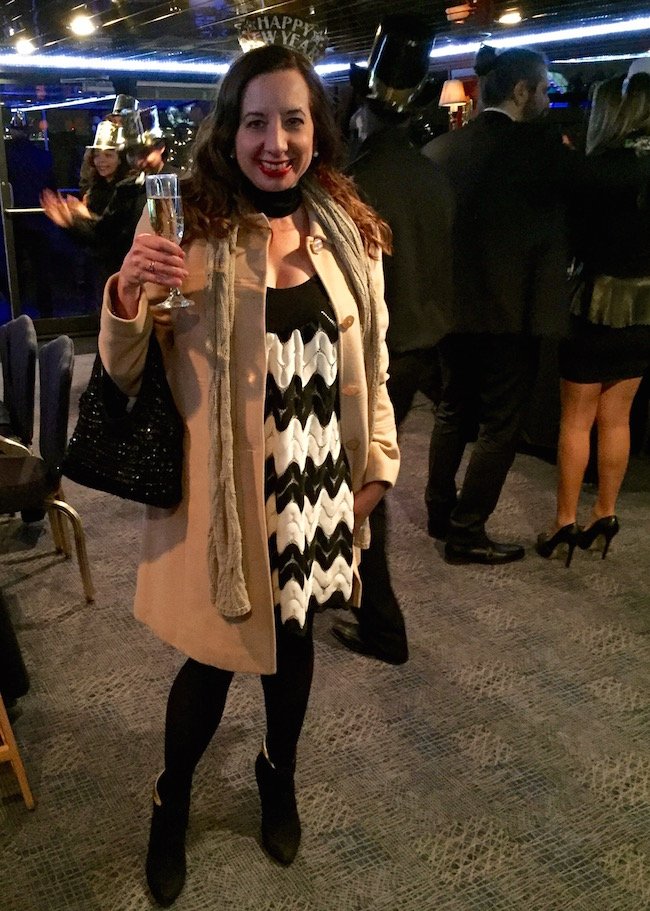 Special thanks to the staff and crew of the Hornblower Esprit for a magical night we’ll never forget. Hornblower offers weekly dinner cruises, as well as cruises for special occasions like Valentine’s Day. For more info on Hornblower, visit the website.