When it comes to outstanding New York City pizza, Brooklyn and Manhattan grab all the fanfare. But Queens – considered the pizza weakling in NYC by several so-called food experts – makes a strong case for greatness as it muscles its way into the competition with New Park Pizza.

Located in Howard Beach, a largely Italian-American neighborhood just minutes away from JFK Airport and the Rockaways, New Park has been serving phenomenal pizza to the borough for over 57 years. There’s a good reason people continue to frequent the widely popular hole-in-the-wall establishment right up until its midnight closing: the gas-fired (not coal or wood) brick oven pizza is simply awesome.

Case in point: my close friends Scott and Jeannie drive all the way from Staten Island (a 26-mile jaunt) just to get their pizza fix, and it’s totally worth it if you ask me. New Park is my personal NYC favorite when I have a hankering for a delicious slice—the flaky, evenly, charred, almost burnt crust, the savory, sweet sauce, and the melt-in-your-mouth mozzarella combine to make a heaven-on-earth experience. Trust me on this: just one bite and you’ll know what I’m talking about, as you’re transported into pure pizza nirvana. Hey, I brave the two-hour train/bus ride myself, when my schedule permits, just to devour a few slices. 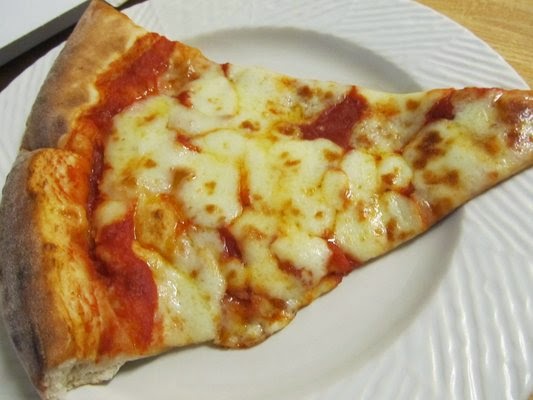 This slice of heaven is worth the travel time. {credit}

While most NYC pizza slices taste scrumptious fresh out of the oven, in my opinion, the true test of pizza excellence is how the flavor holds up after it’s been reheated. New Park slices pass the test with flying green, white and red colors, as they are almost as delicious the next day, and remain lip-smacking good several days after their glorious oven birth.

The trick, according to my best buddy Scott, is to warm up the pizza in an iron skillet over a low flame for a few minutes, instead of sticking it in the oven or microwave, in order to keep the pie from drying up.

Though the squares aren’t as good as the Neapolitans, to me, they’re still rather appetizing. And as long as New Park keeps pumping out those mouthwatering slices, I believe NYC pizza lovers will make Queens a pizza destination. As for me, New Park Pizza will always have a place in my heart and soul, not to mention my stomach.

Leave a comment and tell us about your favorite New York pizza, and we’ll check it out!

« Beware of Tenant Blacklist; See New York Through a Tourist’s Eyes; 25 Seinfeld-isms 25 Years Later…Yada Yada Yada
The Best Of: Day Tripping in the Bronx – The Best of Little Italy »