THE TWENTY-SOMETHING FOODIE
by Melissa Kravitz 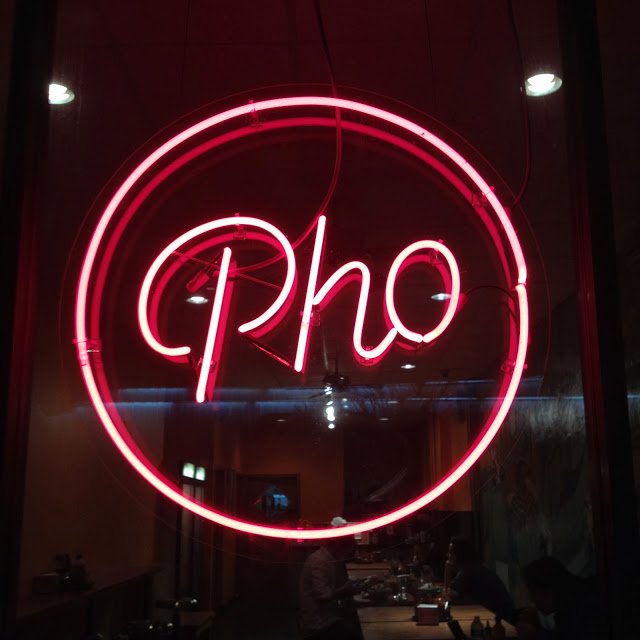 On the first chilly day of fall, I suggested to a friend that we go out for pho.  “Fa?” she asked, confused what I was suggesting. With ramen so popular now, I was shocked that a New Yorker my age had never enjoyed pho (and I say this as someone who eats hearty, tasty meals on a budget, not as a food snob). This hard-to-pronounce easy-to-spell rice noodle soup is a key component of Vietnamese cuisine, and a fantastic way to warm up in cold weather.  In most cities in America, it’s difficult to find a delicious bowl of pho, but in New York we’re lucky to have dozens of varieties.  Here are a few of my favorites throughout NYC.

Stick your chopsticks and a deep spoon into a steaming bowl of vegetable pho at Lan Cafe, a vegetarian Vietnamese restaurant in the East Village, which serves steamy bowls of fragrant pho that doesn’t lack in flavor.  The soup comes with an abundance of vegetables, many more greens than you’d see in your typical bowl, cubes of tofu, and the traditional raw bean sprouts on the side are also served with homemade sauces to mix in, if you want to amp up the spice level of your bowl of vegan soup.

Out in Long Island City, Cyclo is a cute Vietnamese restaurant where various versions of pho reign supreme. Vegetable or oxtail broth is available, with a variety of proteins such as chicken, beef, tofu, and shrimp. Toss in freshly sliced jalapeño peppers and basil leaves for a nice kick. Bowls of pho are available in small and large portions, so those who don’t want to make a meal of soup can still have a delectable appetizer. Halfway through your meal, go for the extra order of rice noodles, $2, to soak up extra broth that will be left at the bottom of the deep bowl.

One of the city’s best pho restaurants is on Grand St, and is called, creatively: Pho Grand. And the over 20 varieties of pho here truly are grand, in both presentation and taste.  Large bowls run for $7.25 and come in a variety of authentic broths such as beef, chicken, and vegetable, with a huge slew of mix-ins and toppings –– don’t be afraid to mix and match the preexisting combinations on the menu. Brisket, tendon, tripe, beef balls, fish balls, jumbo shrimp, and white meat chicken are all available proteins, and the broth’s spiciness is adjusted to order.


Enjoy pho with a bang at Pho Bang, located between Chinatown and Little Italy, forging a potential spot for a future Little Vietnam.  Extra-large bowls are all around $6 (Pho Grand is their biggest competitor) and packed with fresh ingredients.  Along with rice noodles, egg noodles are also available, as well as bread, if you like a starchier soup.  Mussels, squid, shrimp, scallops, and fried fish are all unique options, and some more fusion-style bowls of pho include ingredients like pineapple, okra, and cubes of beef.

As we say in New York City, pho-gettaboutit, and enjoy a steamy bowl of soup as the cold weather comes to New York.