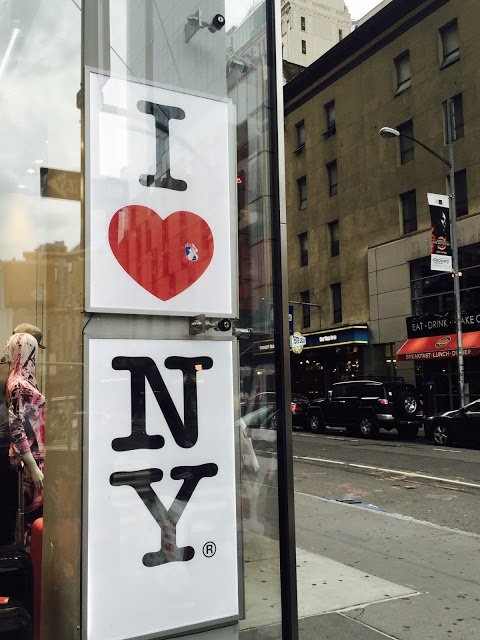 I’ve blogged about my fun birthdays in New York City before. Some have been low key and relaxed while others have been more on the rowdy side. This weekend, I celebrated another year gone by, and a fun-filled start to my birthday week. The past few days went like this…

Friday, I shared a quiet night with Mike in our apartment, and ate dinner while watching one of my favorite documentaries, Every Little Step. The film tells the story about making the 2006 revival of A Chorus Line, how the musical came to be through mastermind, Michael Bennett, and a behind-the-scenes look at the life of Broadway performers, including the audition process. I love everything about this film! I saw it in the Lincoln Plaza Theater when it opened in 2008, and I could watch it again and again. If you love the theatre, you must see this movie. I won’t tell you anymore about it, but here’s the trailer.

Saturday morning was relaxed too. We had breakfast at our local diner, and then I went to get a killer blowout from Santa at Salon West and prepped for my birthday date. Early evening, Mike and I dodged the rain and returned to Nougatine at Jean-Georges, one of my go-to special occasion bars in the city. (We went there last year for dinner.) We had a couple of cocktails and chowed on truffle popcorn, wasabi nuts, and soft pretzel sticks… yum!

After eating too many wasabi nuts, it was time for dinner downtown at Bobby Flay’s Gato. Located in the hip NoHo neighborhood, Gato boasts a lively, party-like atmosphere, a huge bar, and a spacious dining room. It’s not like a lot of the smaller, more quaint restaurants downtown. Besides the food, which I’ll get to in a moment, we spotted Bobby Flay standing outside the kitchen! (No photo on this go-around.) 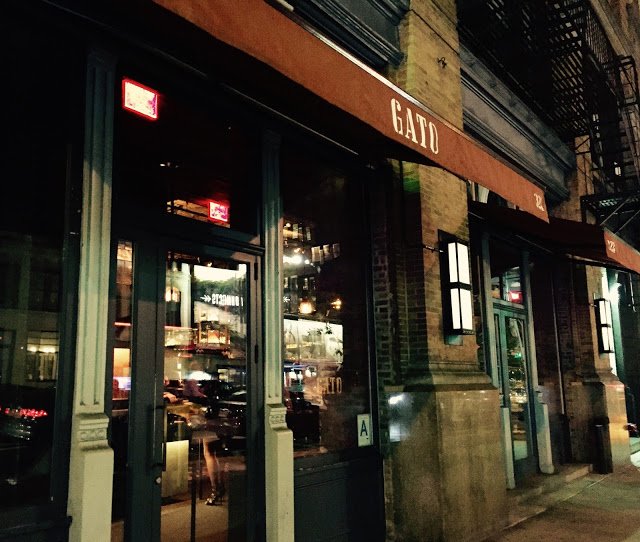 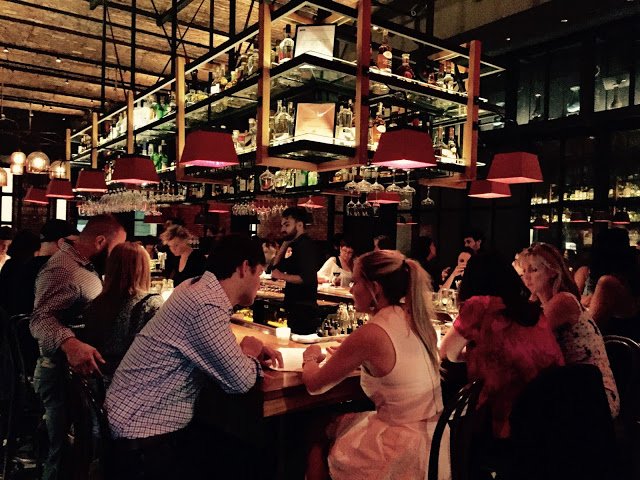 Mike and I shared the Burrata, peperonata, harissa; Piqillo filled with raw tuna, saffron sauce; Beef crudo, pickled fresno chiles (3 for $17); Roasted octopus, sour orange, bacon, oregano ($18); and the Kale and wild mushroom paella, crispy artichokes, egg ($28). All I can say about every bite, is WOW! Amazing food. It you’re looking for a trendy downtown spot with a lively scene, Gato is it. You can go for drinks and nibbles at the bar, or sit in the dining area and have a decadent dinner. 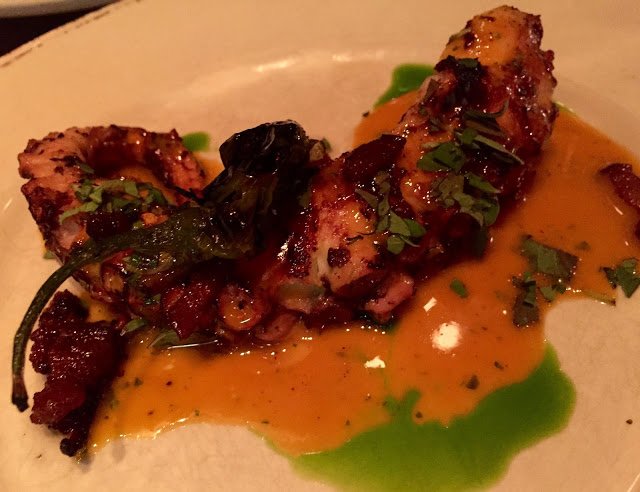 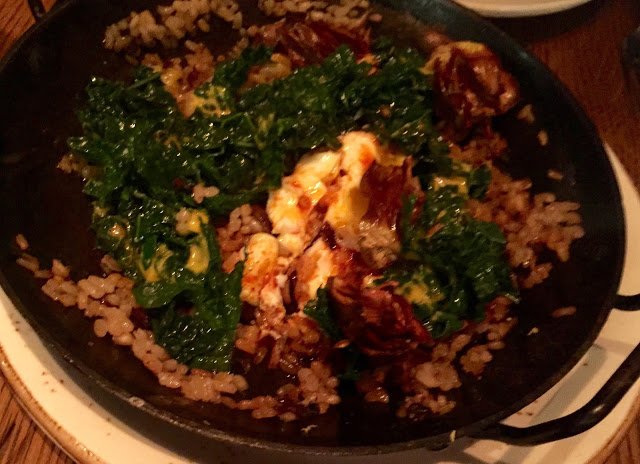 After dinner, Mike and I were on the move again. This time, we headed to Midtown to meet my mom and cousin, Danielle, at Joe Allen. They ate a post-theatre meal, while we had drinks and the delish banana cream pie. But it was late, and although my birthday had officially begun, it was time to hit the hay until morning. The late-night rain had stopped, so we grabbed a quick ride up Broadway and returned home in a flash. 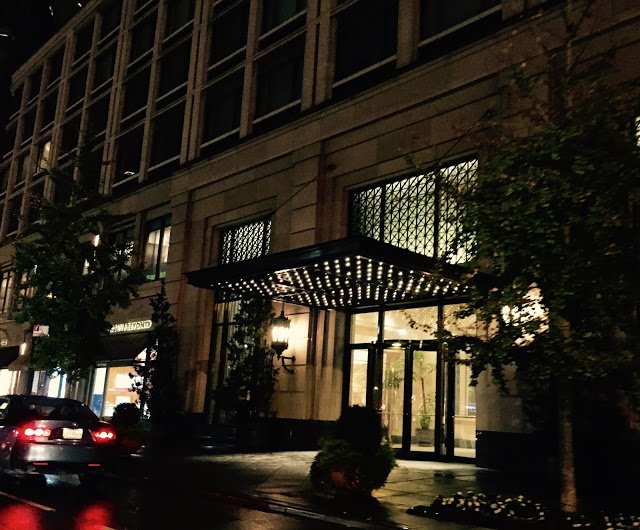 The following morning, I awoke to a lot of flowers from hubby, which I arranged later. 🙂 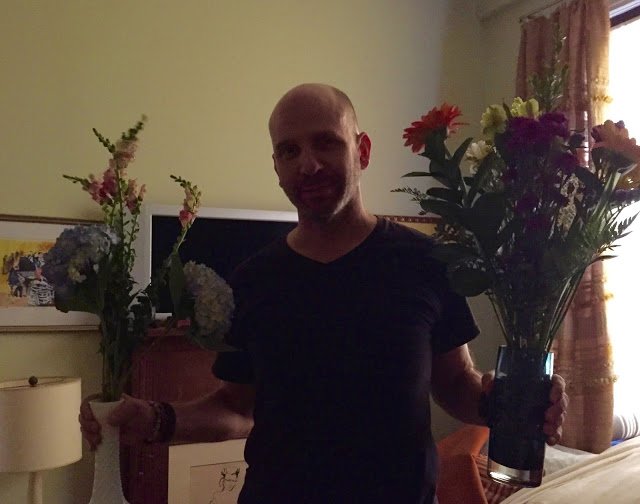 It was time to get dressed and head downtown to the High Line to meet my mom, aunt and cousin. We strolled on a picture-perfect afternoon, and the rain managed to hold off until later in the day. 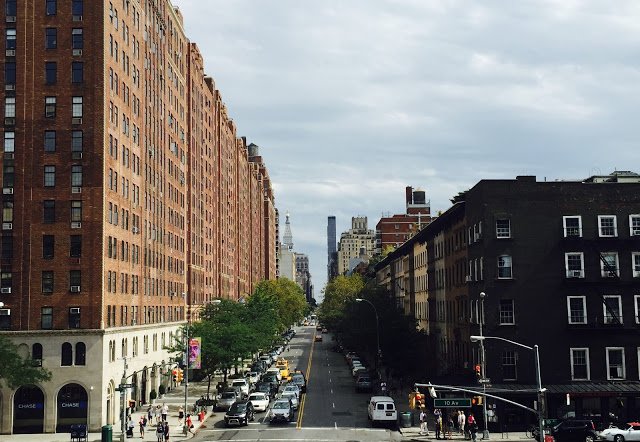 After our outing at the High Line, we wandered through the prettiest part of Chelsea. By this time, Mike and I were starving, so he and I meandered down to the West Village and had brunch at Mémé on Hudson, and it was delicious. The menu is mostly Mediterranean with Moroccan influence, and a few staples like a burger and French toast thrown in. I had the lobster and eggs – Maine lobster potato hash, two eggs over easy, bacon, spicy hollandaise, brioche, ($18). And Mike had 2 eggs over easy with chicken sausage, potatoes,  and salsa verde ($15). I definitely want to return to Mémé to try the dinner menu. 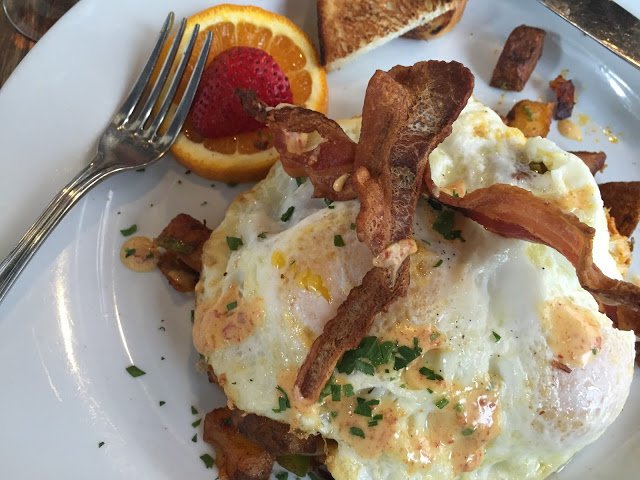 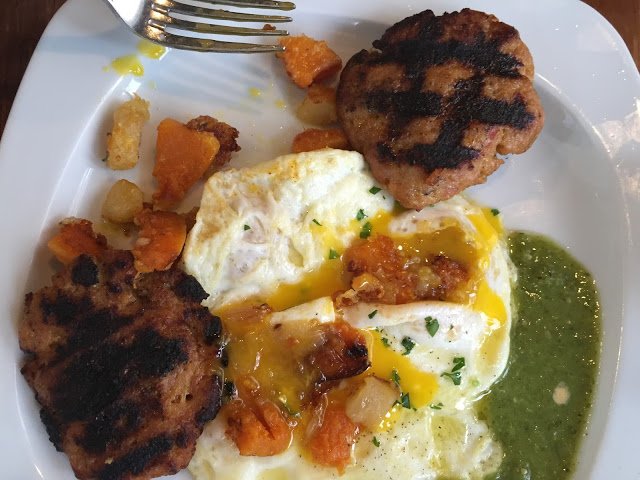 It rained while we enjoyed our brunch, but wound down to a light drizzle by the time we left. We ventured north on Eighth Avenue until Mike grabbed a Citi Bike to the Upper West, and I went on to meet mom and Danielle for some birthday vino. I snapped a few shots along my way.  I traveled to the city by bus many times over the years and came into New York through the Port Authority. I couldn’t help but stop there for a quick selfie. 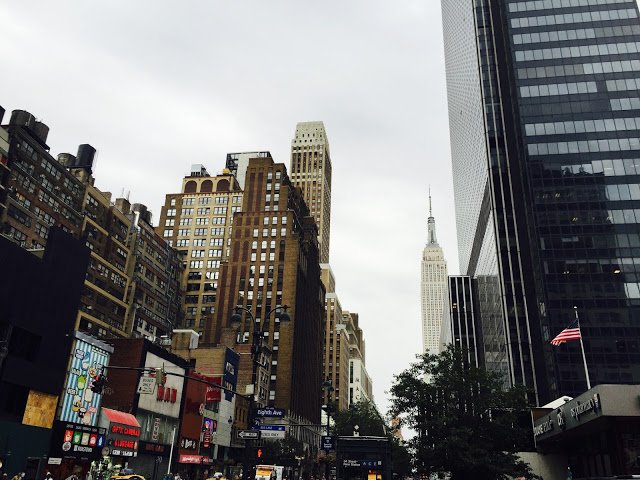 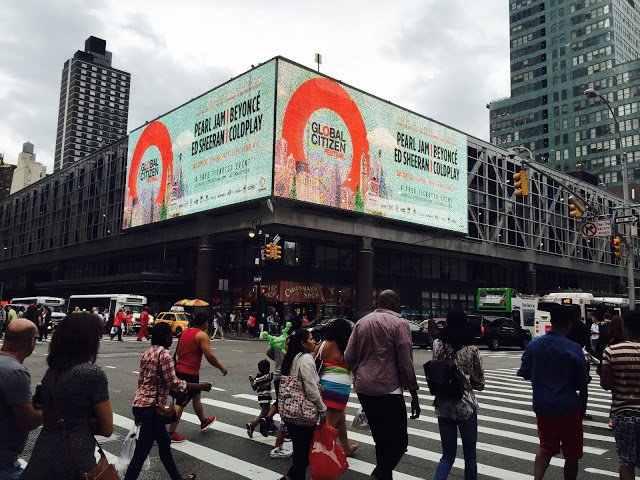 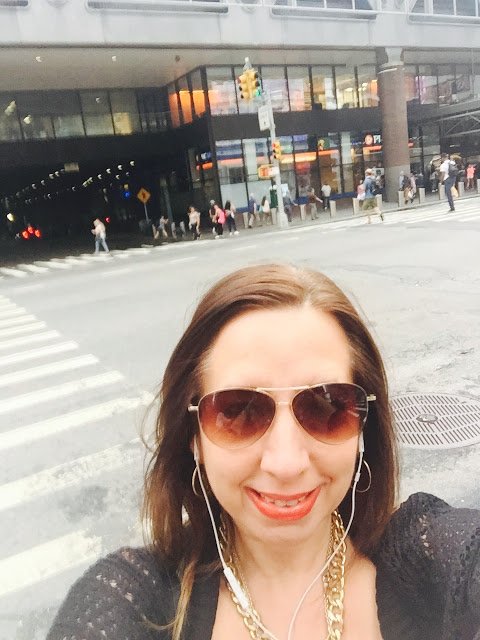 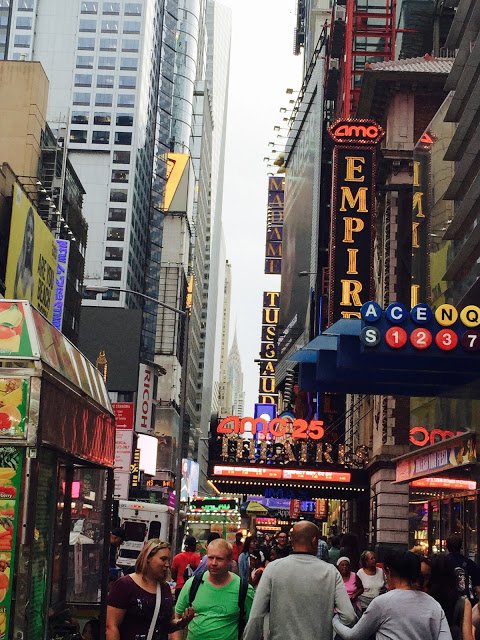 I met mom and cuz at the Hotel Edison, and we walked down 46th Street to the Hourglass Tavern, an adorable spot on Restaurant Row. 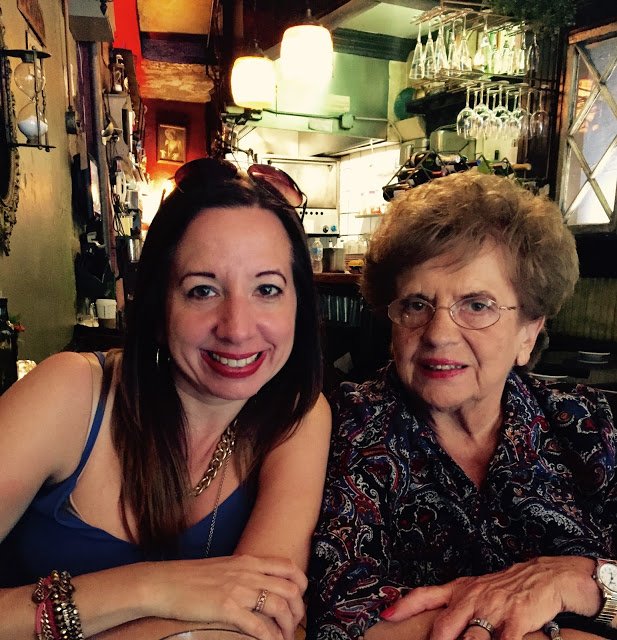 After a glass of wine, we crossed the street to Deacon Brodie’s for another round. 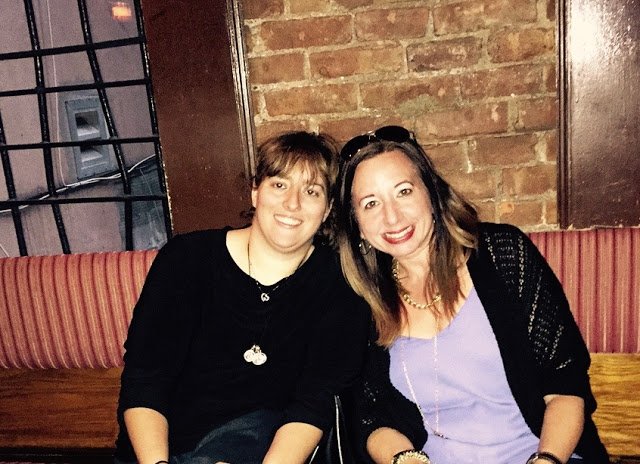 The clock read almost 8 p.m. A quick change, and I was off to meet Lauren Malamala at Fig & Olive in the Meatpacking District for a NYFW party featuring Georgine. (More on the fab fashion later.) We sipped the Piscine, a classic and elegant drink from the South of France with sparkling wine, served on ice with fresh strawberries. 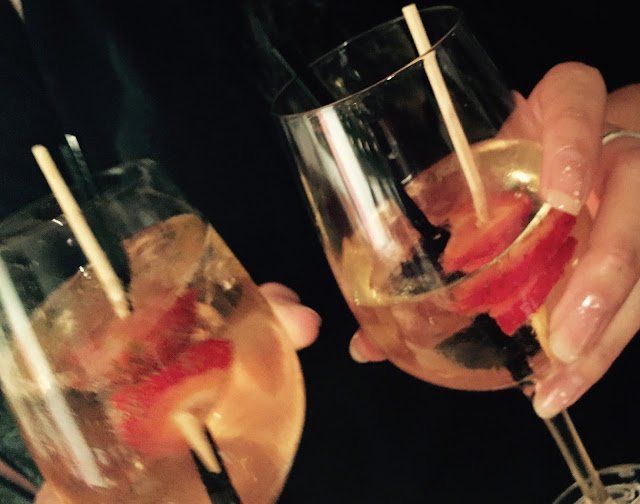 Lauren and I had a wonderful night. What a fantastic finale to another birthday in New York City. Until next year…

« A Tribute in Light + Lower Manhattan Is Rising + Happy Birthday to a 9/11 Rescue Dog + More Linkage
New York Vs. London: What to Expect on the Other Side of the Pond »