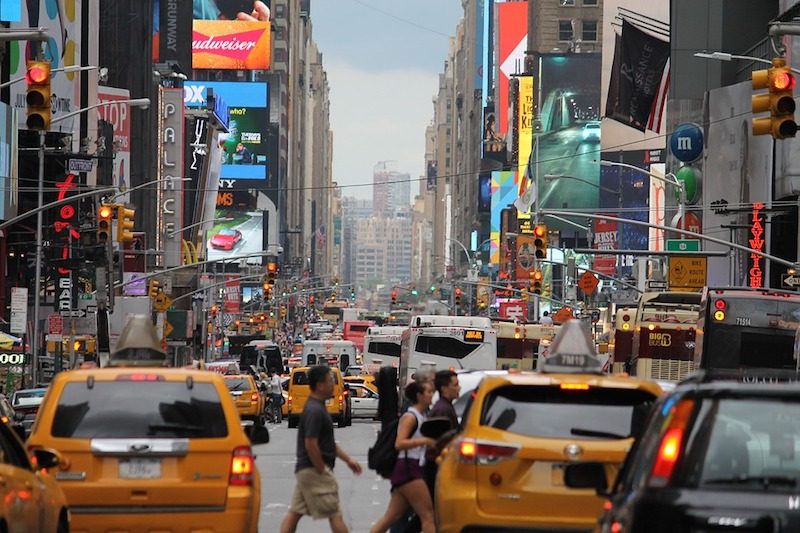 I completed a questionnaire for National Geographic Intelligent Travel’s “I Heart My City” only to find out that they’ve discontinued this column. I spent a lot of time answering questions and putting the piece together and received a response that the email was no longer valid. It would be a shame to waste such great info and so many suggestions about NYC, which I thought that you, my readers, fellow New York-Ophiles, and those visiting New York could use and would appreciate. It’s no secret that New York is my city.  🙂 I hope you enjoy!

When someone comes to visit me, the first place I take them is Central Park because it really is the greatest public park in the world and a testament to how most New Yorkers live without private outdoor space. Central Park is our backyard! After which, I’d tour my neighborhood –– the Upper West Side –– and hit foodie havens like Zabar’s and Levain Bakery, and be sure to point out some of the most spectacular buildings in NYC, such as the Dakota, The Apthorp, the Dorilton, and the Ansonia, all within blocks of each other. 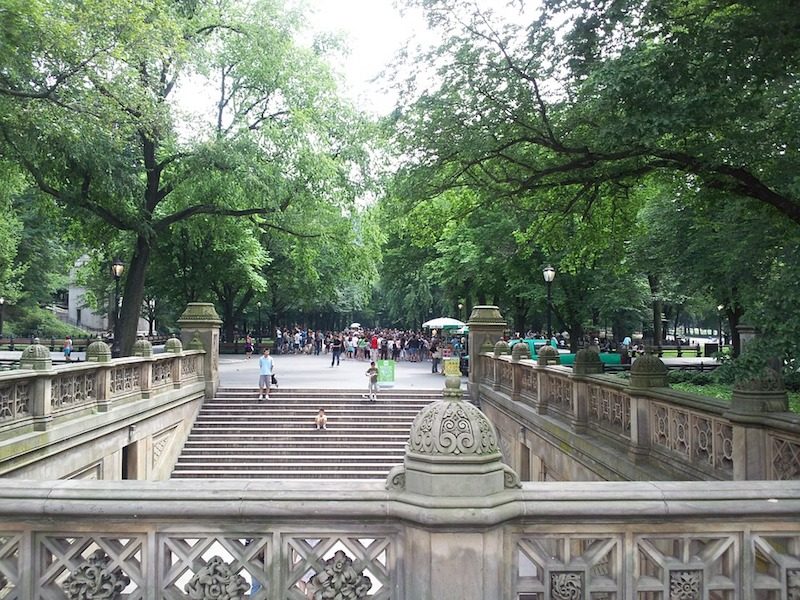 Spring, particularly late April and May is the best time to visit my city because trees are blooming and flowers are budding. Temperatures range from 50 to 75 degrees, and the city feels happy. New Yorkers are in their best mood because winter is over!

You can see my city best from the Roosevelt Island Tramway. Most tourists don’t know about it and rarely frequent Midtown East, so it’s sort of a local secret. The view of the East Side of Manhattan is phenomenal from Roosevelt Island itself too. 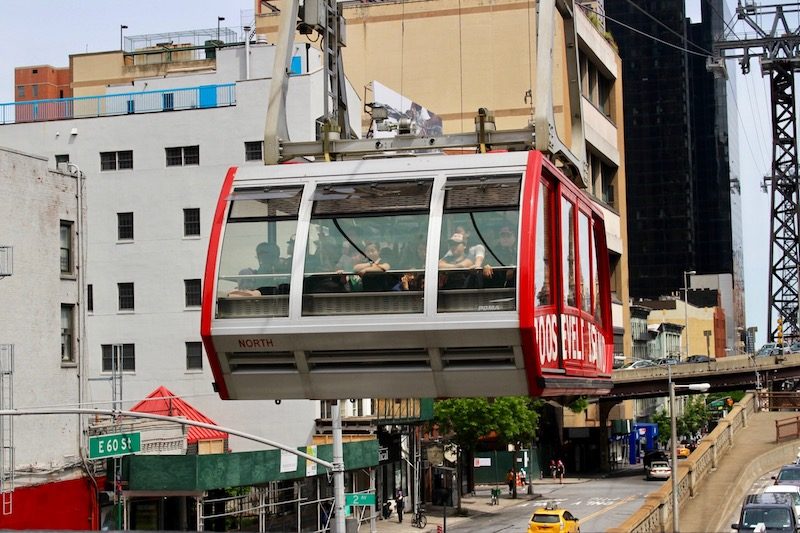 Locals know to skip Times Square and check out Union Square instead. New Yorkers hang out here around the clock. Union Square is also the gateway to Greenwich Village.

Kaas Glassworks and the New York Historical Society Museum Store are the places to buy authentic, local souvenirs. (We put together some other suggestions here.)

In the past, notable people like Bob Dylan, E. B. White, and Joan Didion have called my city home.

My city’s best museum is the Metropolitan Museum of Art because you could go every day for a week and you wouldn’t see it all. You can escape the hustle and bustle of Manhattan and lose yourself inside, or hang out on the steps and people watch. 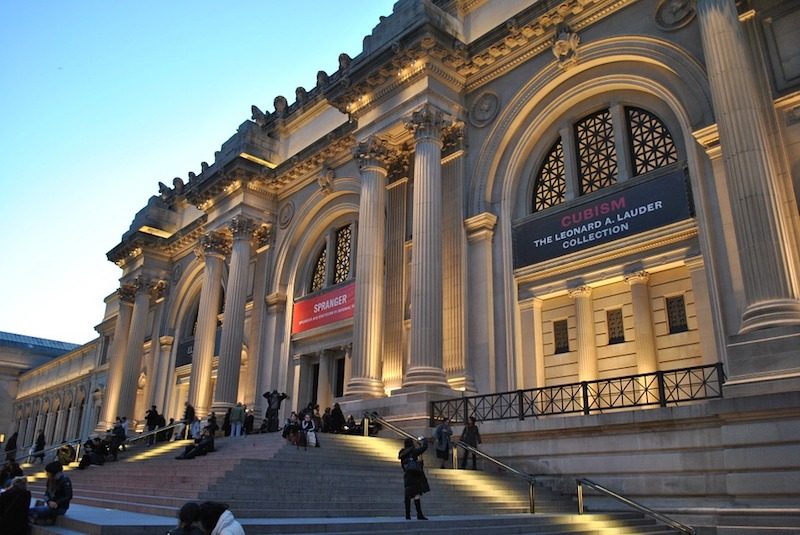 If there’s one thing you should know about getting around my city, it’s that riding the subway is the most efficient way to travel.

The best place to spend time outdoors in my city is the West Village and High Line. Browse the shops, eat brunch, admire the architecture, and then stroll the High Line for fabulous views and photo ops of the ultimate elevated urban garden.

My city really knows how to celebrate Christmas because New York City is probably the most spectacular place in the world during the holiday season. The lights, decorated windows, giant snowflake suspended over Fifth Avenue, Rockefeller Center tree, and more –– a brilliant display takes over the city in a wonderful way. 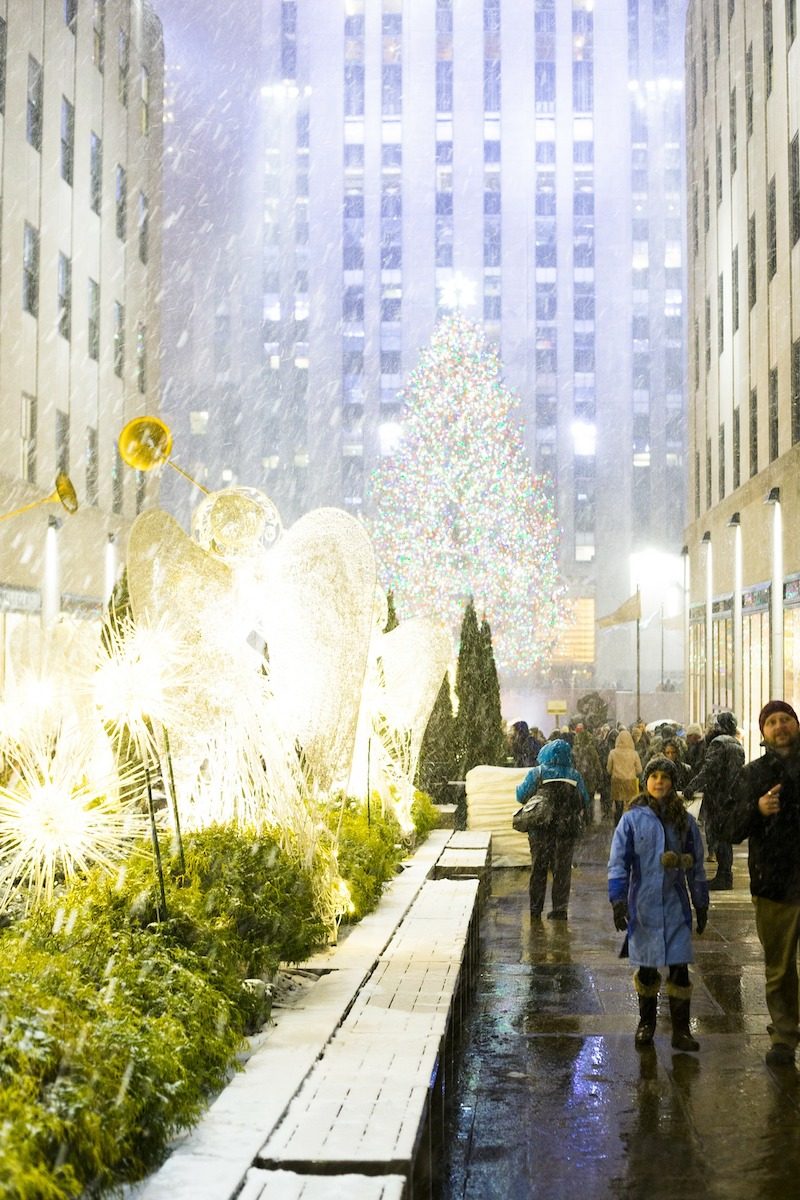 You can tell if someone is from my city if they wear mostly dark colors (New Yorkers love black), wear headphones, and walk across the street when the light is red!

For a fancy night out, I put on my heels and head downtown for a fantastic dinner, or to the Theater District to see a Broadway show.

Just outside my city, you can visit the North Fork of Long Island and taste award-winning wines, savor farm-to-table cuisine, and appreciate the calmness of the Long Island Sound.

My city is known for being overcrowded, but it’s really overflowing with creative souls.

The best outdoor market in my city is Union Square Greenmarket, where you can get the best farm-fresh produce and artisanal ingredients to prepare a delicious home-cooked meal. 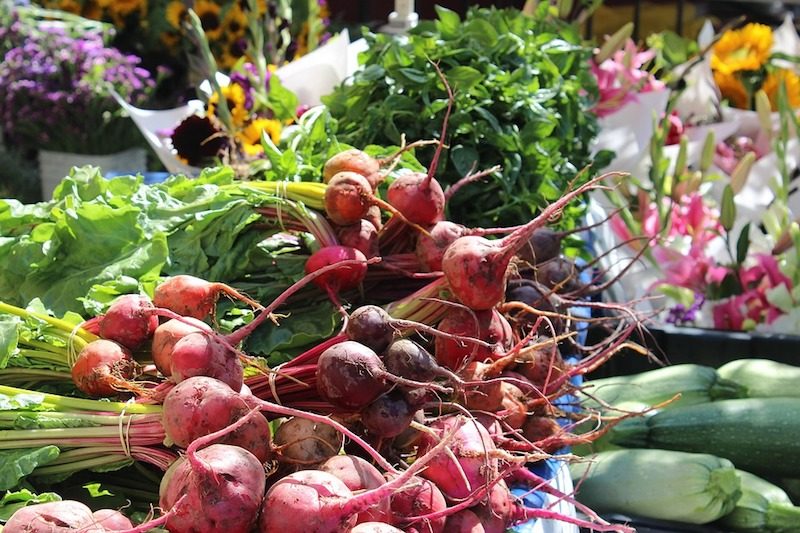 Any NYC diner is my favorite place to grab breakfast, and J.G. Melon or Joe Allen are the spots for late-night eats (ideal after that Broadway show).

To find out what’s going on at night and on the weekends, read Time Out NY.

When I’m feeling cash-strapped, I head to Gray’s Papaya at 72nd and Broadway for a “Recession Special” (two hot dogs and a papaya drink for about six bucks), then I go walking anywhere my feet will take me. It’s the cheapest and most fantastic way to spend an afternoon in New York!

To escape the crowds, I grab my dog and head to Riverside Park, then stroll the promenade to the 91st Street Garden for a “You’ve Got Mail” moment. 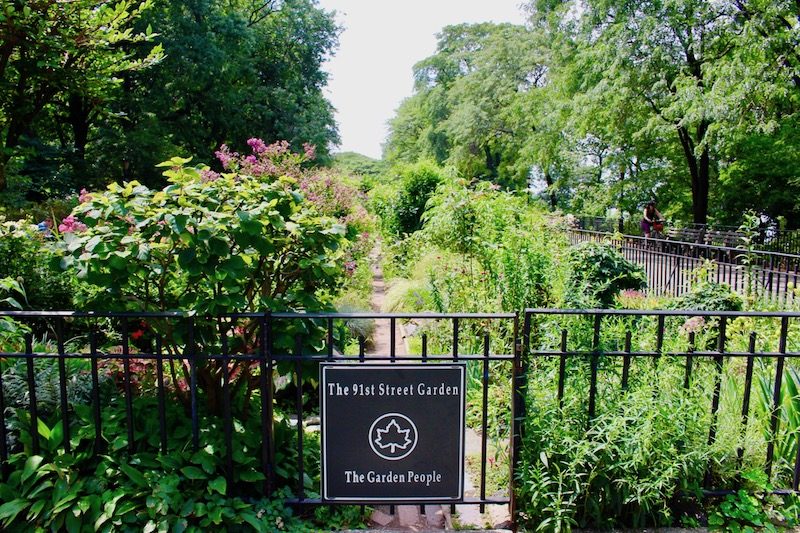 The dish that represents my city best is a New York slice of pizza, and the egg cream is my city’s signature drink. Sample them at Joe’s on Carmine Street and Lexington Avenue Candy Shop respectively.

Joe’s Pub is the best place to see live music, but if you’re in the mood to dance, check out Beauty Bar where you can groove to 1980s tunes.

A delayed subway due to train traffic could only happen in my city.

In the spring, you should go to Bryant Park, an oasis among the skyscrapers in Midtown Manhattan. 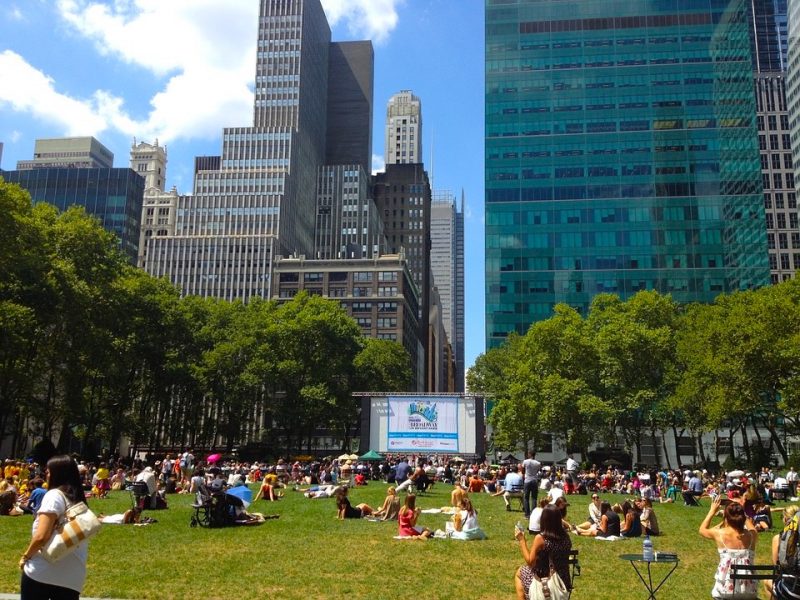 In the summer, you should walk in Hudson River Park and watch a sunset.

In the fall, you should explore the picturesque, brownstone-lined streets of Brooklyn Heights.

In the winter, you should make snow angels in Prospect Park, Brooklyn.

If you have kids (or you’re a kid at heart), you won’t want to miss Macy’s Thanksgiving Day Parade.

The best book about my city is Here is New York by E.B. White because it best describes the people who make up New York City: natives, commuters, and settlers. He says it best: “Commuters give the city its tidal restlessness; natives give it solidity and continuity, but the settlers give it passion.” And New York oozes passion from every pore. 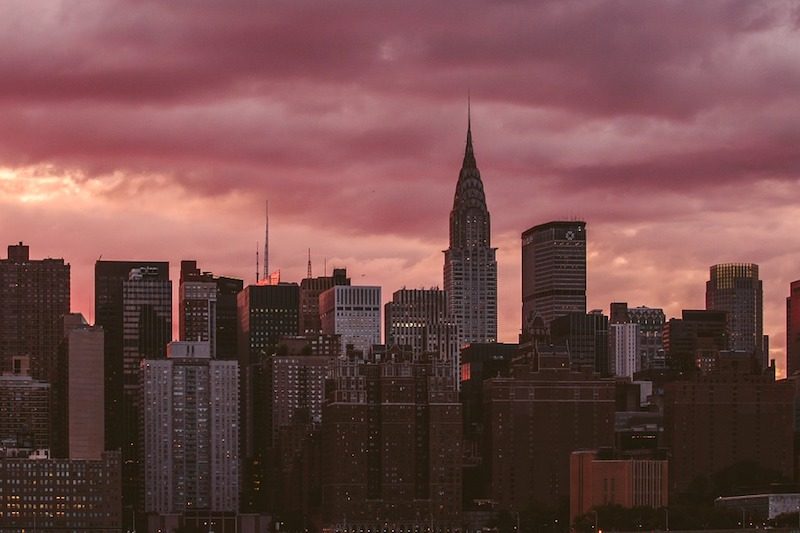 My city is the most inspiring, energetic, yet crazy place on the planet. I love that anyone can come to New York with a dream, and with hard work and perseverance, they can make that dream a reality.

I love the cheap eats and the Michelin Stars. I love the madness of Midtown and the quietness of Fort Tryon Park. I love how New York City constantly evolves and grows in new directions, yet pieces of its past still linger.

In response to people who say, “I love New York, but I could never live there” – I’d say, “Yes, you could. You haven’t seen all of it. There’s a place in this city for everyone, and that’s what makes New York the greatest city in the world.” 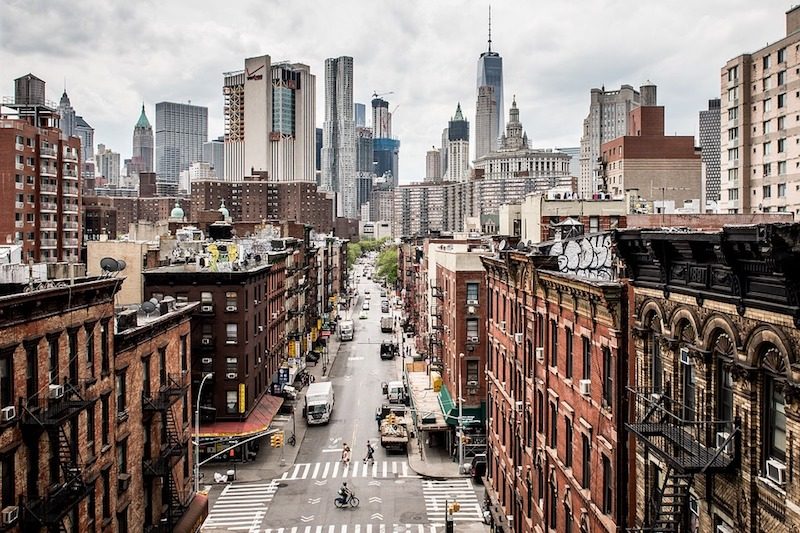 Also becoming a New Yorker,  loving New York after living in the city for a decade.

Plus. why Kate still loves living in Brooklyn.