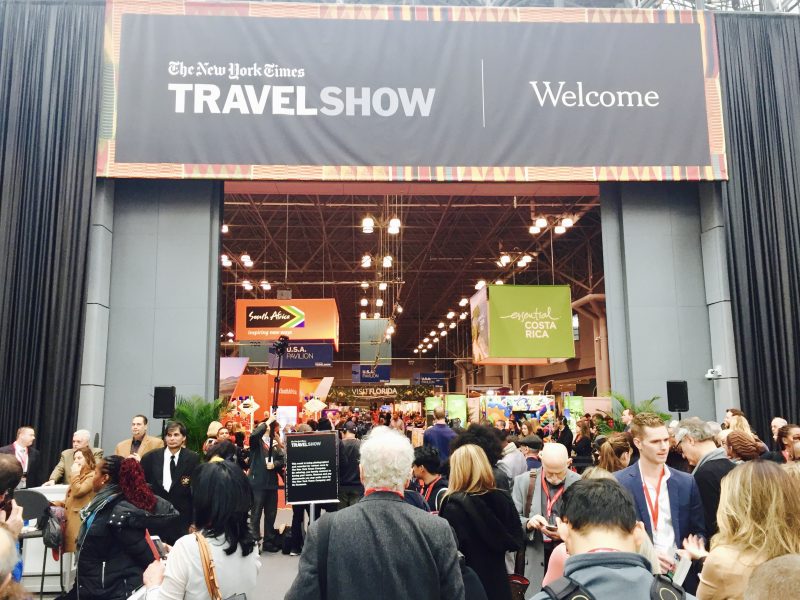 This past weekend I went to the New York Times Travel Show at the Javits Center for the first time. I knew that the annual event attracts more than 500 exhibitors from 150 countries and draws over 29,000 travelers and industry professionals, but still, I was impressed by the variety of seminars and demographics of the attendees. People ranged from college age to seniors, and hailed from all over the world. The show proves that travel plays a crucial role in many people’s lives, and that gentle reminder, in and of itself, made the show worth my time. I learned a few things about the latest in travel while I was there too….

TRAVELING SOLO is becoming more and more the norm for a lot of people, including women. Yes, solo travel has emerged as a trend over the past five or ten years, but it turns out that it’s becoming more the expected and accepted, even to those cities and countries that are off-the-beaten track. A lot of travelers are opting to venture to other parts of the world alone rather than planning a trip with a significant other, friends, or family members. Why? Because travel is a way for us to discover ourselves, as much as it is a way to discover foreign places and cultures. And, when traveling alone, you call the shots. You never need to adapt to another person’s schedule, likes or dislikes. 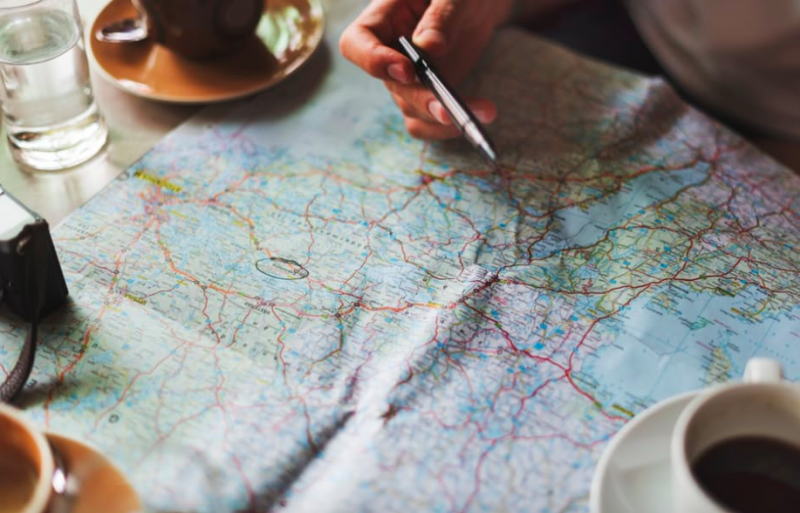 EUROPE CAN BE A QUICK TRIP. More and more Americans are taking short excursions to Europe. Escaping to parts of Europe for four or five nights is becoming more doable, and depending on the city, more affordable. From New York City’s JFK Airport, flights to Iceland run about six hours or a little less. Flights to Ireland take about six and a half hours, and London runs about seven. Why not hop across the pond for vacation during the off-season and take advantage of low fares?

OFF-THE- GRID PLACES like Antartica, Sri Lanka, and Guadaloupe, as well as Cuba, Jordan, and Calabria, Italy, a region that was included in the 52 Places to Go in 2017 by the New York Times, are ripe for visits right now. Why not select a less-visited destination for your next trip?

ONE OF THE SHOW’S HIGHLIGHTS was meeting legendary Italian chef, Lidia Bastianich at the Calabria booth. I was a fan of Lidia’s before I lived in New York, and I’ve eaten at her 46th Street restaurant Becco more times than I can count. She was Calabria’s guest and was kind enough to pose for pics and chat with everyone.

Chefs Antonio Abbruzzino and Caterina Ceraudo traveled from the Calabria region and prepared a delicious antipasto tasting at the close of Friday’s exhibit. That tasting was only a preview of what was to come on Saturday night….. 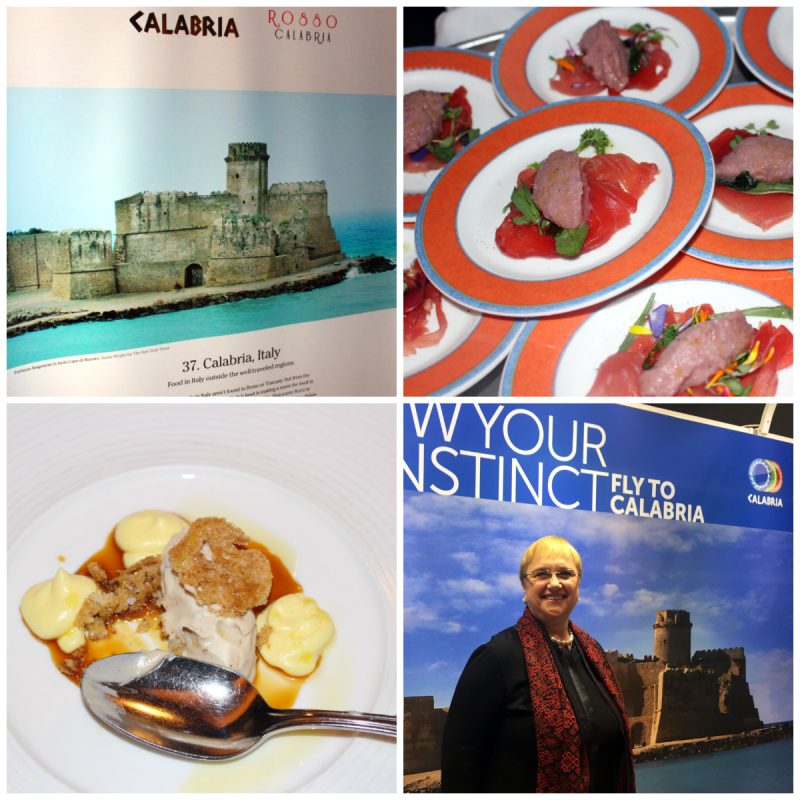 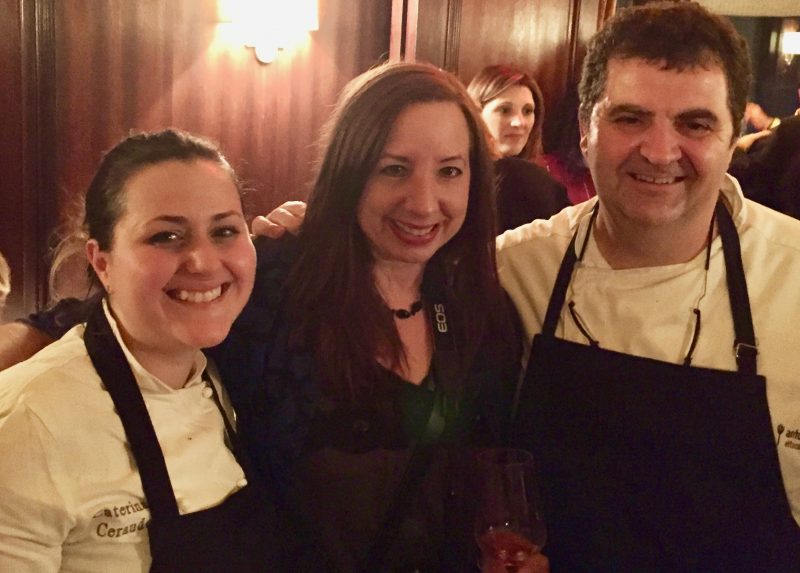 Here I am with Chef Caterina Ceraudo and Chef Antonio Abbruzzino, both of Calabria, Italy.

I had the pleasure of eating some of the most delectable Italian food and wine of my life, as the two chefs cooked a feast at Felidia Restaurant. The lineup consisted of 14 mini-courses. Some of the menu highlights included fried panino, snapper, citrus; lamb, artichoke, mint, licorice; tuna carpaccio, onion ice cream; ravioli stuffed with ragu; and one of the most simple yet decadent desserts – bread, oil, and sugar.

After all of this incredible food from two of Calabria’s most prominent chefs, I am especially curious about this region of Southern Italy. I’ve been to Rome, Florence, Venice, Genoa, Milan, and the Piedmont Region, so perhaps my next trip will be to the boot where Calabria is located.

I STOPPED BY THE INDONESIA BOOTH and attempted to write my name in Javanese (really tough to do, by the way!), as it’s almost like artwork. I spent about 15 minutes trying to write out T-r-a-c-y. Yes, that’s all. And if I’m honest, the finished word barely resembled the Javanese symbols. At least I tried. 🙂

The booth was colorfully decorated and provided a sampling of Indonesian culture. The ladies donned traditional costumes and headdresses that were magnificent! Bali has long been on my bucket list, and now it’s moved up a notch or two. 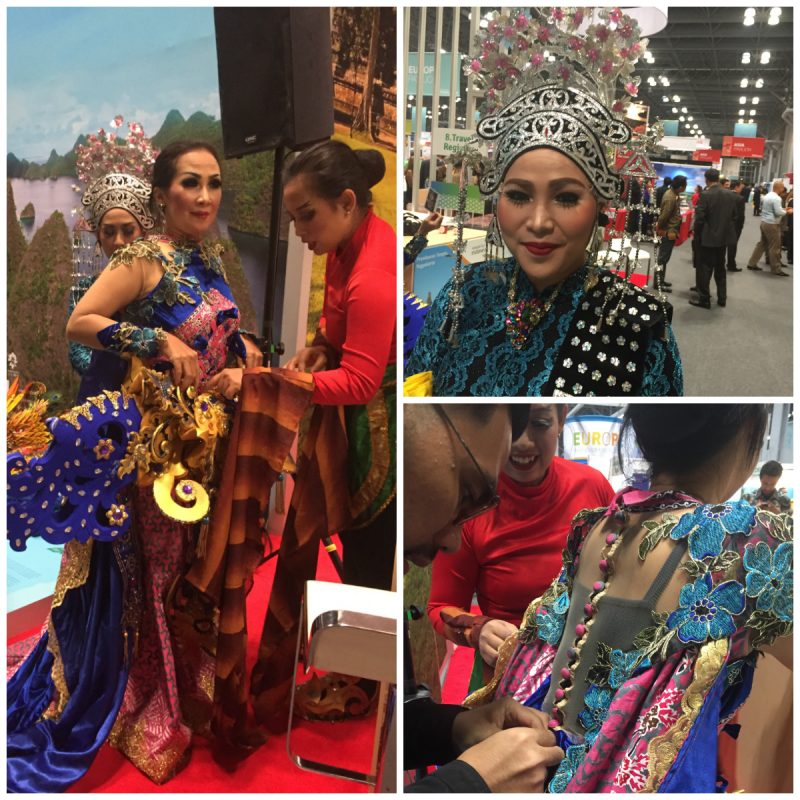 RECOMMENDED WEBSITES FOR DEALS come in handy when planning any trip. Try The Flight Deal, Travel Pirates, Hopper, Skyscanner, Jet Blue’s Best Fare Finder, and The Points Guy to save some cash.

THE MOST IMPORTANT MESSAGE came from NY Times bestselling author Patricia Schultz at the end of her session. She encouraged us all to travel. She said that as Americans, we can go anywhere in the world we please. We can get a passport in a day and a visa without much effort.

What’s stopping you from booking or at least saving for your next trip?

If you like to travel or you’re curious about travel, the New York Times Travel Show will be back at the Javits Center next January.

Also about travel, a chat with one of New York’s most well-known travel bloggers, and what I learned from two days alone in Paris. Plus, why we shouldn’t stop traveling.