Looking for a fun read while commuting on the train? If you’re a straphanger or someone with a short attention span who wants instant gratification instead of waiting for the big finish of a novel, Nubia DuVall Wilson’s Encounter with Strangers is for you. Any person who’s lived in or been to New York will connect with these real-life scenes from the author’s life.


Derived from the blog by the same name, this short, fun read is organized into sections about life as it happens on the streets of NYC, subway stories, travel, and excerpts from the Wilson’s time in Taiwan. One of my favorite things about the book is that it makes sense in any order. Read vignettes about New York crazies, only-in-NYC moments, her escapades abroad, and even a few celebrity sightings. Skip from section to section through the book and it still makes sense.


Here is an excerpt from the subway chapter ––”Mind the Gap”–– in Encounters with Strangers by Nubia DuVall Wilson. 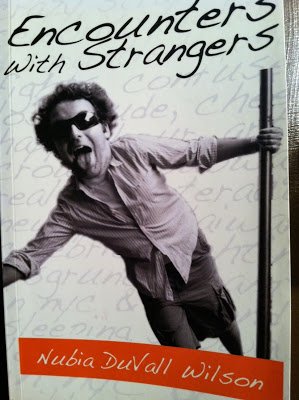 The entire D train was silent while we traveled downtown in our commute to work. A petite man used the emergency doors to enter our train car and broke the tranquil humming of the subway speeding along the tracks.

“I’m hungry! I’m hungry!” he yelled repeatedly, as he stomped up and down the car. He looked people in the eye and continued to scream, “i’m hungryyy!”

Riders tried to ignore him; no one offered money. Since this approach wasn’t working, he decided to fall on the ground. He rolled back and forth on the floor and continued to yell, “I’m hungry!” over and over again. This man had a lot of energy for someone who was starving!

I couldn’t take it anymore. I pulled out a dollar and said, “Hey! Over here!”

He stood up, walked over to me, snatched the dollar, and walked away, continuing his rant.

The woman sitting next to me turned and said, “How rude! He didn’t even say thank you.”

“I guess he is too hungry to remember his manners,” I replied dryly.

The next morning, I had a weird feeling I was going to see Mr. Starved for Attention again. My sixth sense was correct.

I hid behind my Time magazine, so he wouldn’t see me and assume I would give him money again. He stomped over to the corner where I was sitting, hit my magazine, and yelled at me, “i’m hungry!”

Everyone’s eyes were on me. I looked up at him and yelled, “I gave you money yesterday, and you didn’t say thank you, so go away!”

The train roared with laughter. The subway doors opened. Apparently shocked, Mr. Starved for Attention quickly turned away and walked out of the train. To my satisfaction, that was the last time I saw him on my line.


Order Encounters with Strangers on Amazon.com or through Barnes and Noble.