If you’re looking for something to do in the city this Independence Day, head downtown to The Iron Horse’s  Annual 4th of July Pig Roast. The Cliff Street block party is off limits to vehicles, and the bar’s crew will serve free burgers and hot dogs from noon until 6 p.m. All this fun and for a good cause: A cash bar will benefit  The Wounded Warrior Project. 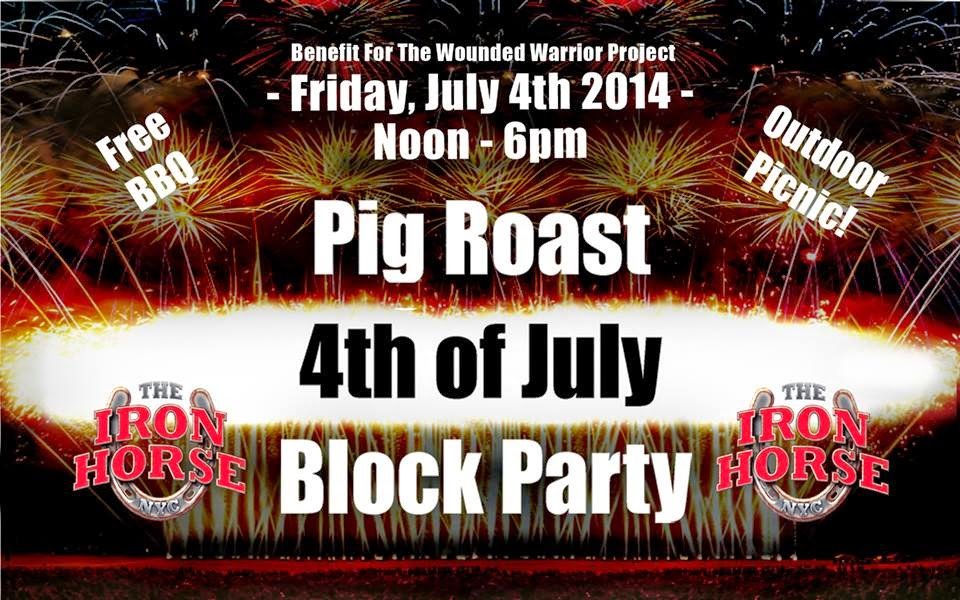 Just like every outing at the Iron Horse, this outdoor party will more than likely lead to a few shenanigans, like my mid-day visit last year. That afternoon goes down as one of the most memorable in my New York Life. Read about it below.

Have a fab July 4th weekend!

Sunday was a fun-filled day between the NYC Half Marathon and St. Patrick’s Day. I met Mike downtown at the finish line near the South Street Seaport, and we walked for about 15 minutes after the race. We ended up at a tiny spot called Fresh Salt for brunch and then decided to grab a beer at a nearby Irish pub called Ryan Maguire’s, but between the runners, spectators, and St. Patrick’s Day revelers, we couldn’t even walk through the bar. We left quickly and wandered to a less-than-desirable watering hole next door called the Iron Horse. That’s when the real fun began.

The dark bar wasn’t crowded when we entered, with two female bartenders tapping beer and pouring cocktails. We saw a sign that read, “Free hot dog or hamburger with the purchase of any beverage, except a Rolling Rock.” We skipped the Rolling Rocks and the dogs and burgers –– I ordered a Bud Light and hubby had a Blue Moon instead. A few more runners trickled in, and the place started to get busier, but still not packed. We were thrilled to have seats at the bar and be able to relax a bit.

I was drinking beer #2 and Mike was on beer #3 (he needed it after running 13.1 miles in 30 degree weather), when suddenly the music changed and a loud slapping sound on the wooden bar interrupted our conversation.

Continue reading “Would You Like to Swing on a Bar”