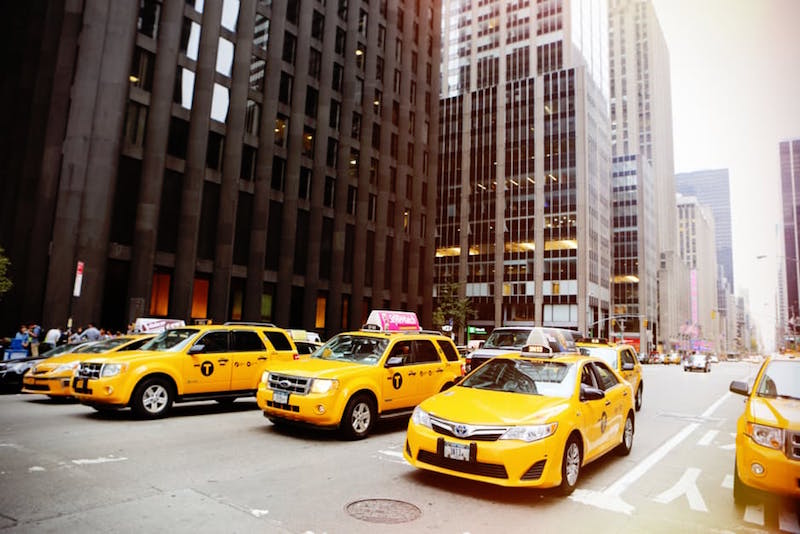 Become a pro at taking taxis in New York.

Whether you’ve just moved to New York or you’re in NYC for the weekend, the first thing you’ll need to figure out is how to navigate the city. And trust me, you will get lost, but know that we’ve all been in your shoes. (Even us locals get turned around when outside the borough or neighborhood we live in.) Of course, you’ll use public transit, but sometimes,  you’ll want to take a taxi. Luckily, the city is brimming with yellow cabs, but you have to know what you’re doing to get a cab. Follow my guide, and soon you’ll be taking taxis in New York like a local.

How to tell if the taxi is available….

Considering the sheer number of taxis zooming through Manhattan, you’d think finding one that’s vacant would be as easy as finding a great slice of pizza. But, not so much. In fact, finding an available cab can be challenging during rain, snow, extreme temperatures, or at rush hour.

Sure, you can give the back seat a quick look, but the fastest way to tell if a cab is occupied or not is by the light on the car’s roof. If the number light is lit, the taxi is all yours, but if it’s dark, you’re out of luck because someone is riding in that cab. (There are those few taxis whose lights are out of order, and in that case, looking in the back seat is the way to go.)

Cab shifts usually run from about 4 or 5 a.m. until 4 or 5 p.m. and then 4 or 5 p.m. to 4 or 5 a.m., so know that you will have a harder time hailing a taxi within 30 minutes or so of the shift change. Take notice of the off-duty light, which is on the side of the center number. When a cabbie is off duty or finishing up a shift, the off-duty sign will be lit. If it’s your lucky day, an off-duty cabbie will stop and ask where you’re headed, and if you’re en route to his destination, he’ll pick you up for his last fare.

What a taxi costs….

I remember not too long ago (or so it seems) when taking taxis in New York a decent distance would cost $5 to $7. Those days are long gone. The base fare is $2.50 with 50 cents added every 1/5 of a mile or 60 seconds of slow traffic or stop time. There’s a 50-cent surcharge, and a 30-cent surcharge for improvement (what?), plus additional surcharges depending on the time of day and the day of the week.  You’ll also be responsible for any tolls, say, if you are heading to the airport.

Plus, since February 2, 2019, all yellow taxis whose rides begin, end or travel through the area below 96th Street in Manhattan are subject to a $2.50 congestion charge. Ugh. Green cabs and FHVs (For Hire Vehicles) cost an extra $2.75. You can find out more on the nyc.gov website.

Taxis aren’t exactly the cheapest way to navigate the city, unless, or course, you’re with a group and splitting the cost. Otherwise, riding the subway or bus is the most budget-friendly way to get around town. 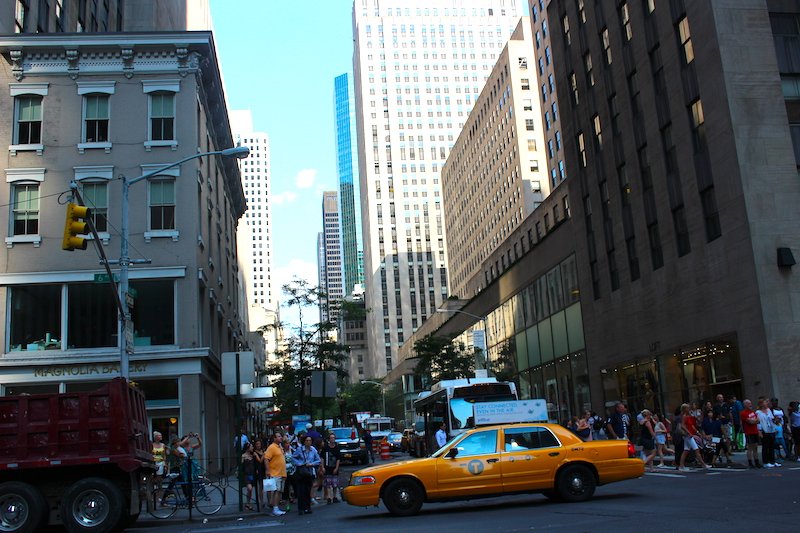 How to flag down a cab….

Now, it’s time for the fun part. So you’ve never hailed a taxi in NYC? Well, it’s time to start! Go to a corner (say, 75th and Broadway), and be sure that you’re hailing in the direction you’re headed. Bear in mind, most avenues don’t have two-way traffic. For example, if you’re traveling uptown, you won’t want to try and get a cab on Ninth Avenue since it goes downtown. Walk over to Eighth or Tenth Avenue and try to get a cab there. Step into the street, but stay far enough from traffic. When you see an available taxi, extend your arm (like you mean it!) and as if you do it every day. In other words, pretend that you are not a newbie cab hailer. 🙂

Depending on the time of day and neighborhood, you might see five or even ten cabs at a time. At that point, don’t worry about who’s on duty and which cars are occupied. Those that aren’t available will buzz by. Just keep your arm up until a cab pulls over to pick you up. 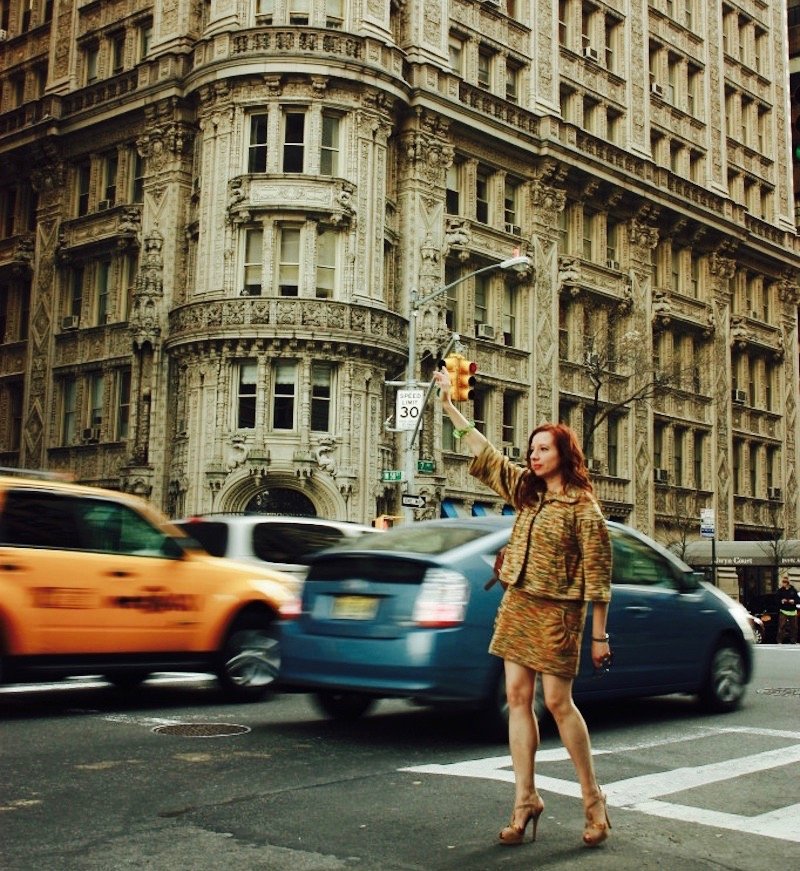 What to do when everyone is looking for a taxi….

Aside from using Uber, Lyft, or Via, how do you get a taxi when everyone else is trying at the same time? Well, of course, you can use Arro, an app that will bring a taxi to you. Or you can walk a block or two and probably have better luck. If you notice five or ten other people trying to hail cabs within the same block, walk to the next avenue, or walk a couple of blocks in the direction you’re heading, and chances are, you will get a cab (unless it’s shift change time). Sometimes the avenues are overrun with folks trying to hail cabs, so standing on a side street might work too.

During the busiest times when taxis are scarce and Uber and Lyft are overpriced, try Via, a rideshare. You may have better luck. Otherwise, I hope you have walking shoes.

And a few words on upstreaming….

Yeah, it’s not cool to steal anybody’s cab, so don’t position yourself in front of someone who’s been trying to hail a taxi. And rather than fight over one, offer to share. 🙂

Tell the driver where you need to go, but do not give an address if you can help it. Locals rarely give addresses. Give a landmark if you can, such as” the Guggenheim,” or a street, such as “Park Avenue between 38th and 39th.”

If you happen to know your way around town and you’re familiar with traffic, feel free to tell the driver which route to take.  The driver may want to take the West Side Highway, but maybe you’d rather stay in the city and take Broadway, even with traffic, because you’ll see more sights along the way. Tell him that. Typically, drivers will take the fastest route.

Beware – some newer drivers might not know the best routes. If you are in gridlock, ask the cabbie to try another street, because you’ll pay for stop time too.

Be nice to the driver. Most cabbies are perfectly polite, if not friendly. I’ve struck up some wonderful conversations with cab drivers. Most might be foreign-born, but they should speak good English. If by chance you land in a cab with a rude driver, or he’s driving recklessly, you can report it to the TLC. This rarely, if ever happens. If the cabbie is driving like Mario Andretti, ask him to slow down.

Once you arrive at your destination, the driver should stop the meter. You can pay by cash or credit card. If you pay cash, be sure to have $20 bills and smaller. (The driver is not required to accept any bill larger than $20.) If you’re happy with the trip, tip the driver. Usually, 15 to 20 percent is customary, or you can round up (if the cost is $8.40, give the driver $10).

Of course, thank the driver. Check the back of the cab and floor for personal belongings such as your cell phone. (Yes, I learned the hard way because I left my cell phone in a taxi once). Always get a receipt – in case you leave something in the cab, you can track it. Exit on the curbside and not in traffic.

And one more thing…

Taxi drivers are required to take you to any destination in New York City. If you come across a cabbie who refuses you, take the name and I.D. of the driver and report them to the TLC (Taxi and Limousine Commission).

Happy taxi hailing! After you do it a few times, I promise, taking taxis in New York City will become second nature. 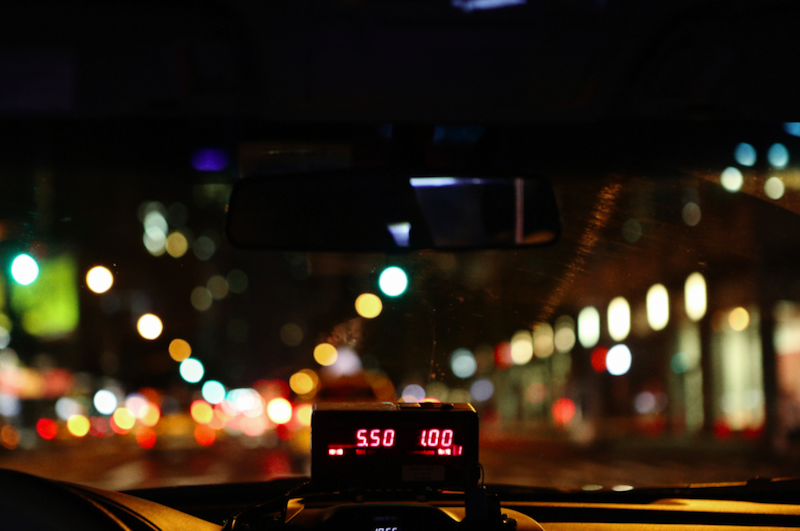 What did I miss? Let me know if you have any other tips about taking NYC taxis.

Also, an amusing anecdote about a new New Yorker learning to hail a yellow cab, and 6 practical tips for your first trip to New York.

« Shopping in the Meatpacking District: 5 Stores to Explore
Why You Don’t Need to Dread Winter in NYC »