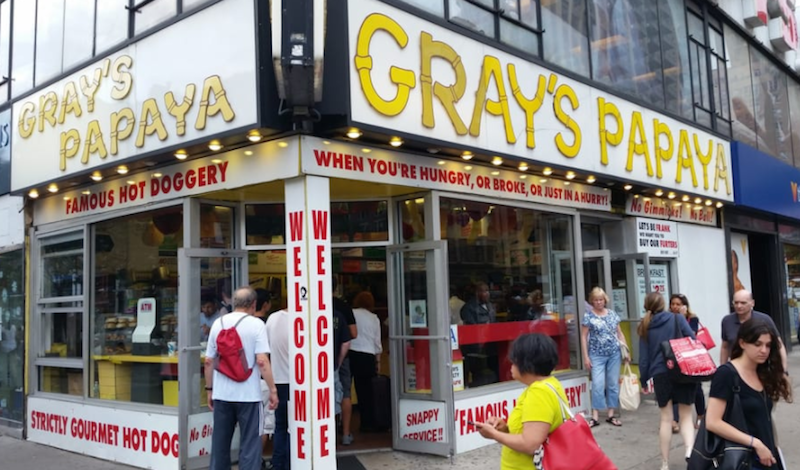 Photo by Michael B via Yelp.

Starving, I stopped by Gray’s Papaya the other day for the $4.95 recession special which consists of two hot dogs and their famous papaya juice. Gray’s is on the Upper West Side eateries list for my column on the West Side Rag. After waiting in line for about ten minutes, I had my dogs in hand and reached the register. Trying to kill two birds with one stone, I asked the frantic cashier, “Could you put me in touch with the owner?”

He hurried me along to ring up the next customer. “The owner is here about once a month.”

“Could I get an email address or a phone number?” I’d like to interview him for an article that I’m writing about Gray’s Papaya. It’s for the West Side Rag.”

He expressed no interest. “No. I don’t have time.  Too many people here. Come back tomorrow.”

“But I just need his email.”

He changed a twenty dollar bill, “Too busy.”

During our conversation, ironically, I noticed a Polite New Yorker button pinned to the right side of his shirt.

“Tomorrow? I can’t come back tomorrow. Obviously, you aren’t interested in free press. Thank you very much!” 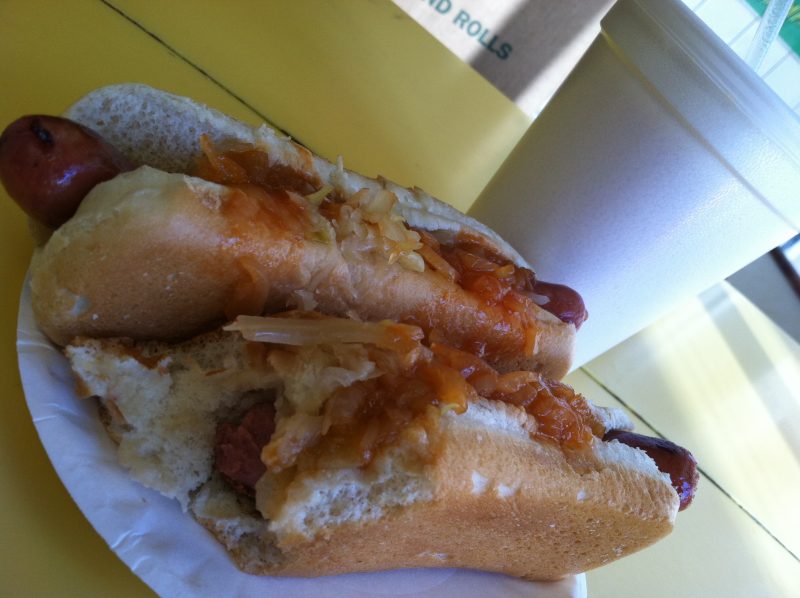 I was about to storm out of the place when an elderly gentleman who was waiting next to me spoke gruffly in his Brooklyn accent, “They don’t need the press. They do four mill a year here!”

Obviously, he’s a regular and keeps a running tally of the number of hot dogs sold. He had a point. They didn’t need the article. Who would think that hot dogs and juice could be a million dollar business? They can, at least in New York City

I grabbed my frankfurters and drink and moved on to Verdi Square. Why would the guy wear a button labeled Polite New Yorker when he might be the rudest in town?  Would I ever eat Gray’s hot dogs again?


I reached the park and relaxed on a sunny bench. Then I took my first bite. Not sure what it is about these hot dogs. It may be the crunchy outside that makes them irresistible. Gray’s Sabrett dogs are the same wieners cooked in dirty water and sold on the street carts throughout the city, but they taste completely different. They’re snappy and delicious, and the perfectly sweet papaya drink is like no other. Despite the bad attitude, I couldn’t hold a grudge as I savored the hot, crunchy dog with mustard, onions, and kraut on a heart-stopping, white, fluffy roll.

A gentleman with a sign labeled  “The Sound of Music” sat nearby with his boom box playing “Singing in the Rain,” and “La Vie En Rose.”The usual hustle and bustle was calm for a Thursday – 70 degrees and sunny will have that effect on people, even hurried New Yorkers. Everyone was relaxed in the square, and for a moment, time almost stopped on the Upper West Side of Manhattan. My dogs were devoured and my tummy happy. I strolled up Broadway, and had long forgotten rude cashier.