New York City isn’t the easiest place to live when you’re trying to maintain clean eating habits. Aside from the wealth of gourmet cuisine and trendy new restaurants, the city’s mainstays – its most iconic dishes – are a daily temptation for me. If these 11 popular NYC foods were calorie-free, my world would be a little bit happier.

Pizza
From grandma pies in the Bronx to artichoke slices downtown, New York pizza is the best in the country. Sorry Chicago, but thin crust wins in my book.

Bagels
People around the world know the amazingness that is the NYC bagel. Unfortunately, a bagel is the exact opposite of “low carb”; and a thick layer of schmear doesn’t help.

Breakfast Sandwiches
I’ve developed a slight addiction to breakfast sandwiches since moving here, tempered only by the fact that fruit is a healthier breakfast option. But a Kaiser roll with bacon, egg, and melted cheese is one of my favorite comfort foods any time of day.

Chocolate Egg Creams
There’s something incredibly nostalgic about a chocolate egg cream, with its chocolatey goodness and sparkling effervescence. Too bad the sugar content isn’t as appetizing.

Reuben Sandwiches
I use St. Patrick’s Day as an excuse to indulge in this high-calorie, yet delicious sandwich. The combination of corned beef, Swiss cheese, and Russian dressing is too good.

City Bakery’s Hot Chocolate
Don’t get hot chocolate confused with “hot cocoa” – real hot chocolate is thick, velvety, and insanely rich. I love City Bakery’s version, served in a bowl with a freshly made marshmallow square floating in the middle.

Shake Shack
Before I actually tried it, I assumed Shake Shack was just another overrated fast food joint because of the constant crowds milling about inside. But now, I’ll admit that I totally drank the Kool-Aid, and I’m obsessed with Shake Shack’s cheeseburgers, fries, and frozen custard. I’d eat it every day if I could.

Black and White Cookies
I remember thinking “what’s the big deal about a black and white cookie?” But after trying one for the first time, I was sold. A large, cakey cookie with white icing on one half and fudgy chocolate on the other is too good to pass up.

Triple Decker Clubs
There’s no doubt about it – New York City diners are best after midnight, and nothing hits the spot after a night out like a triple decker club sandwich. Whether one prefers chicken salad, egg salad, or cold cuts stuffed between the three layers of white toast, this city staple is always worth the extra hour at the gym on Monday morning.

Cheesecake
Cheesecake is one of the most popular NYC desserts, meaning it’s everywhere in the city. With some slices topping out around 1,000 calories, this is one example of how life really isn’t fair. 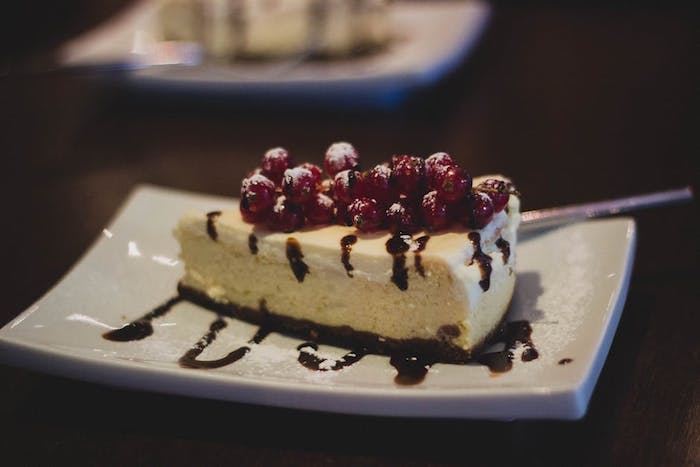 « 6 Unique Hobbies to Try in NYC
Are You Watching ‘Mozart in the Jungle’? »