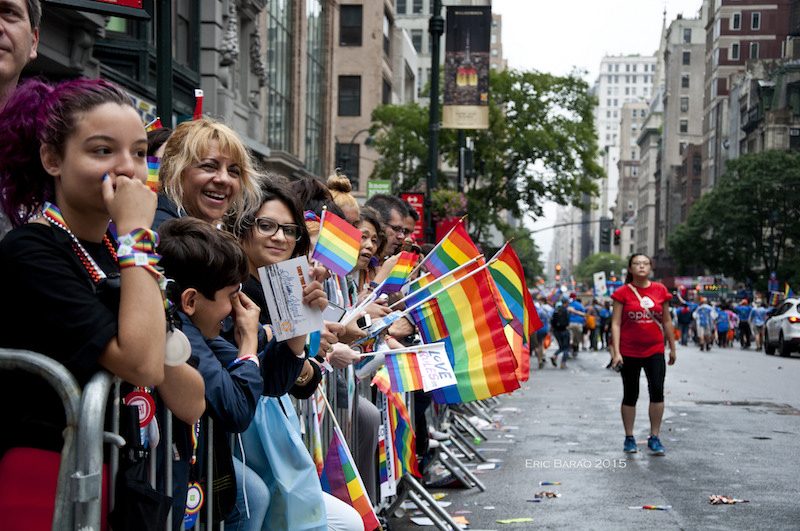 Since 1970, New Yorkers have come together for Pride NYC.

PRIDE. Each year, New York anxiously awaits the week-long celebration in June and its colorful and raucous parade. Since 1970, New Yorkers have come together for Pride NYC, supporting civil rights and the LGBTQ community by marching proudly through the streets of Manhattan.

This year’s WorldPride Parade is historic, as we’re celebrating the 50th anniversary of the Stonewall uprising on June 28, 1969. An estimated four million people are expected to land in New York this week to attend the parade. Events have been happening all month long, but the grand finale is Sunday, June 30th.

Pride takes on different meanings for different people. What does pride mean to you?

Pride can have a negative connotation for some, but not for me. I like to think of pride as feeling content with not only my accomplishments but who I am on the inside and the outside. I’m proud to be female. Proud of an article I wrote.  Proud to be a New Yorker.

Pride can have nothing to do with oneself, though, and everything to do with feeling proud of something or someone else. I take great pride in my city. A city where people of all ages and backgrounds gather and march for gay rights. A city where people can be who they are on the inside and not pretend to be only a mere smidge of themselves on the outside. New York is a city where thousands from around the globe come every year to find their truth, and where they can live that truth and feel accepted. That, in itself, is something to be proud of. 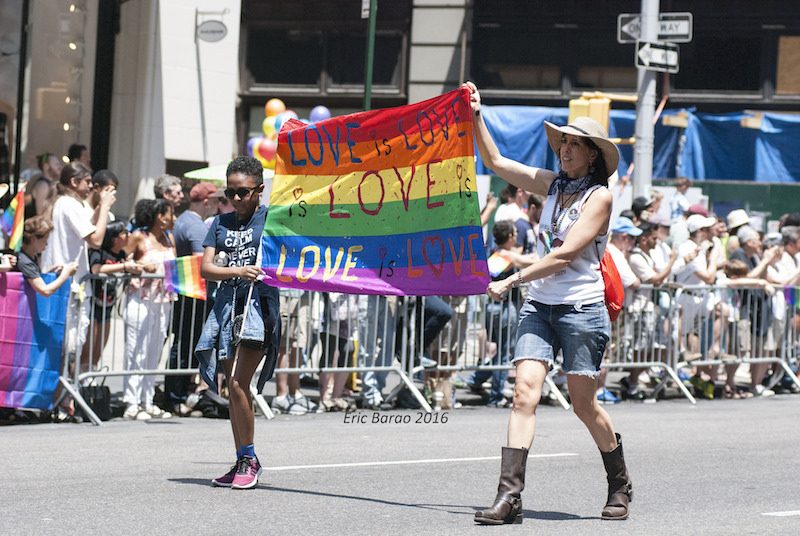 What should you expect from Pride NYC?

Anything is possible! You’ll witness a lot of drag, topless women, rainbows, balloons, streamers, signs, fringe and feathers, glam and glitter, and you’ll hear music and see dancing. Yes, there will be dancing.

It will be a spectacle. It will be fabulous. It will be tons of fun. And you can bet that Pride NYC will be an unforgettable experience. You will be surprised and maybe even stunned. You will laugh. And you might cry. 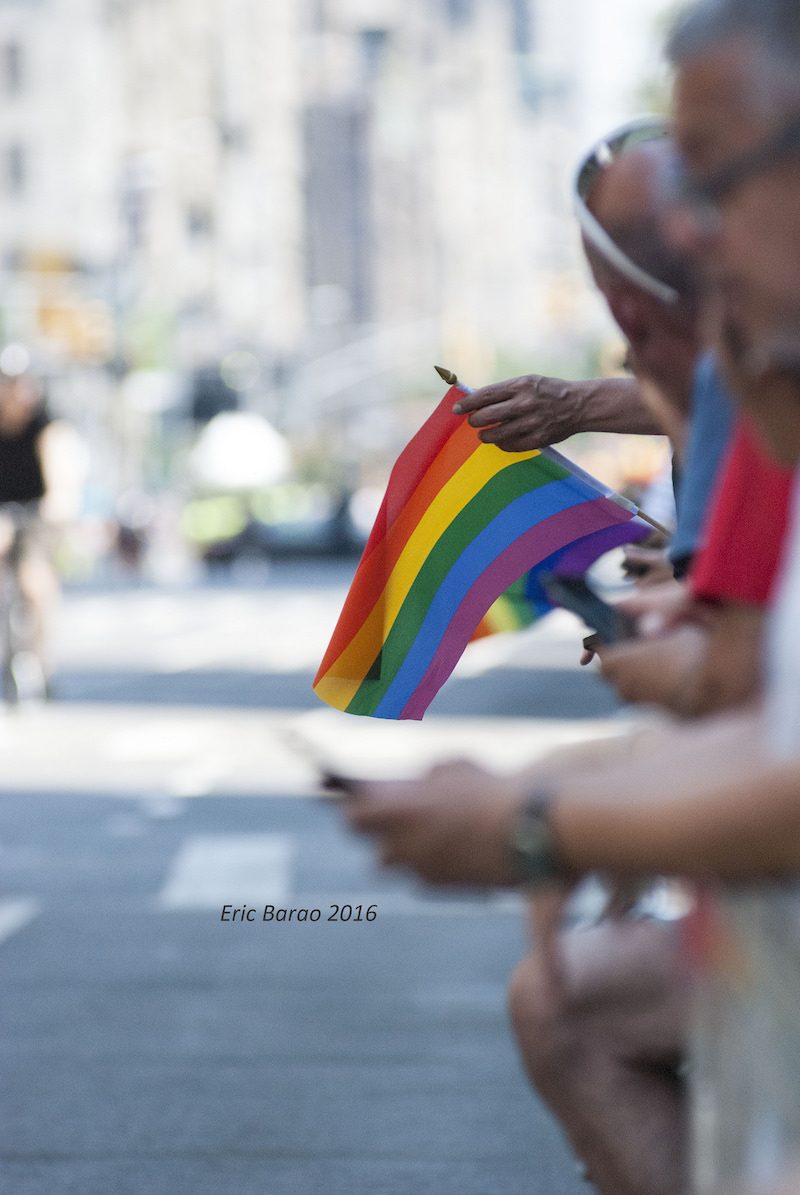 What do you do at WorldPride NYC?

You can stand quietly on the sidelines and not hoot or holler and observe (might be tough to do, honestly). Or you can paint your face and body and sport an outlandish get-up, wearing little or nothing, and as a gay friend of mine once said, “Let your freak flag fly.” And in New York, the freakier, the better. 🙂 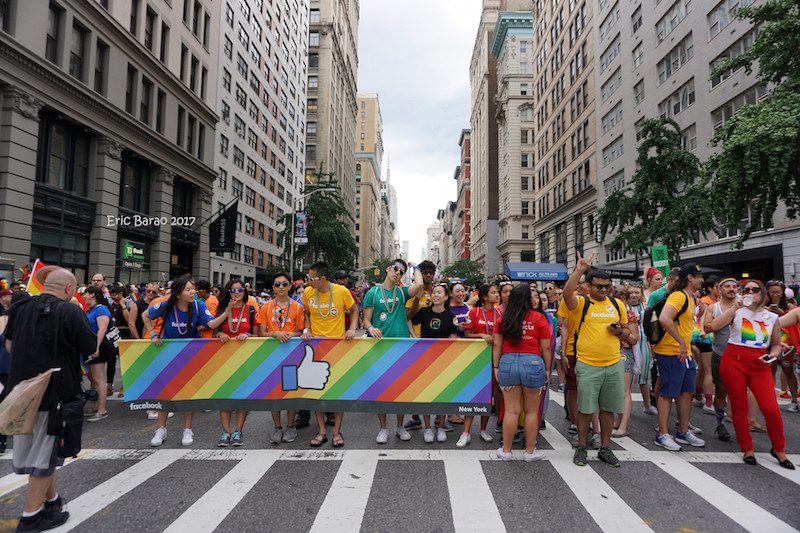 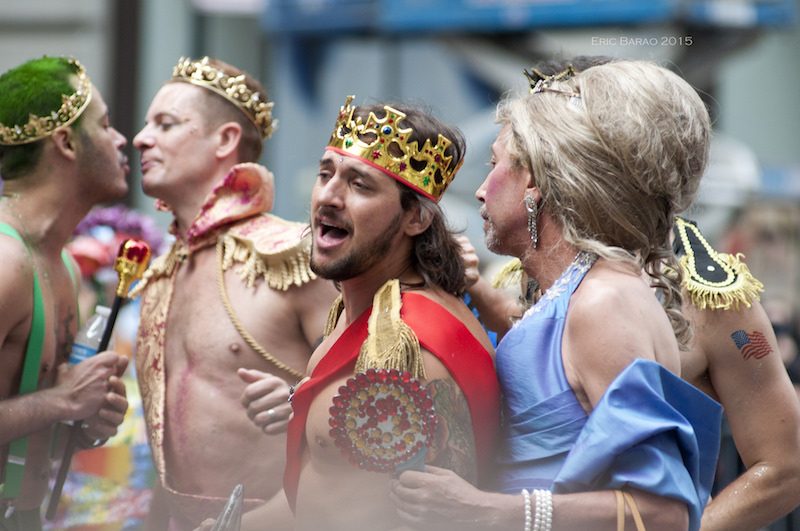 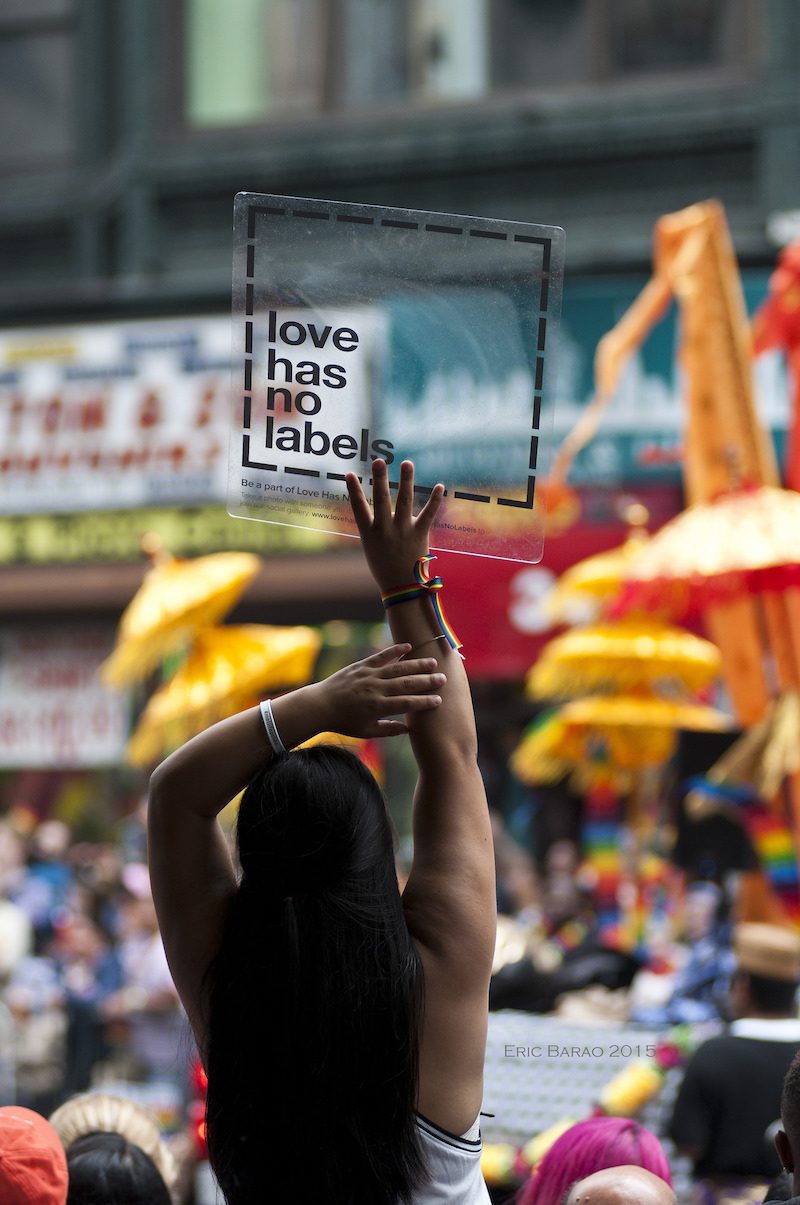 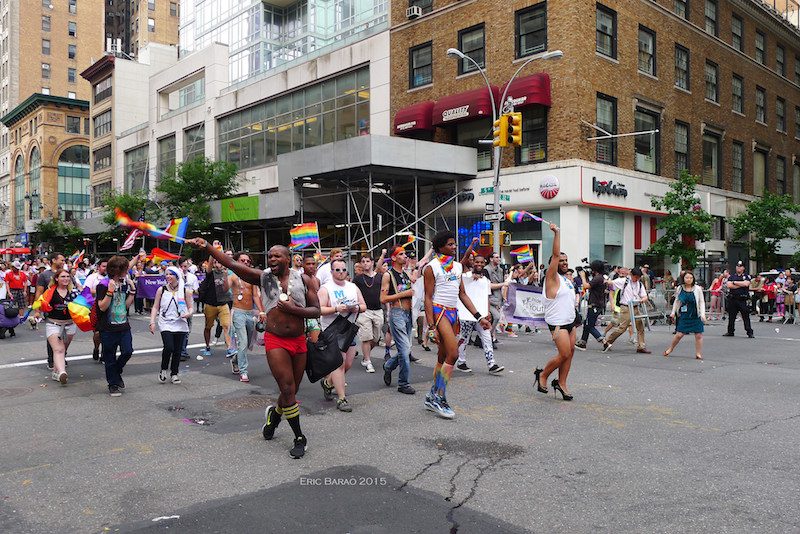 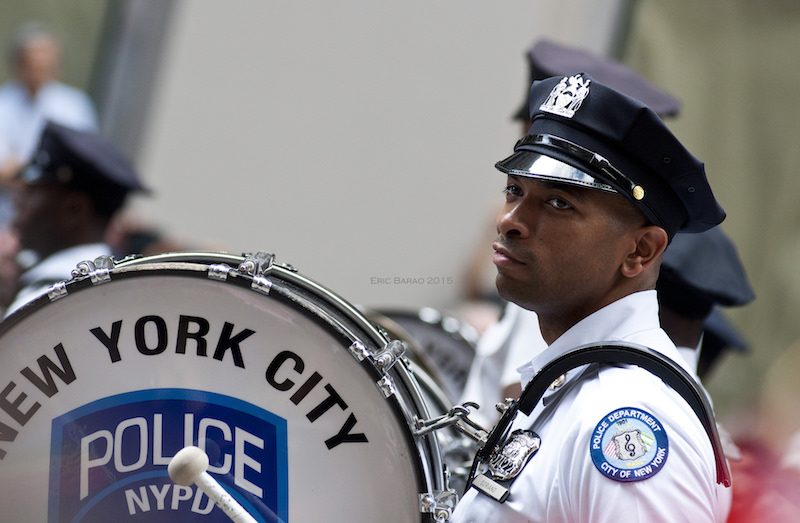 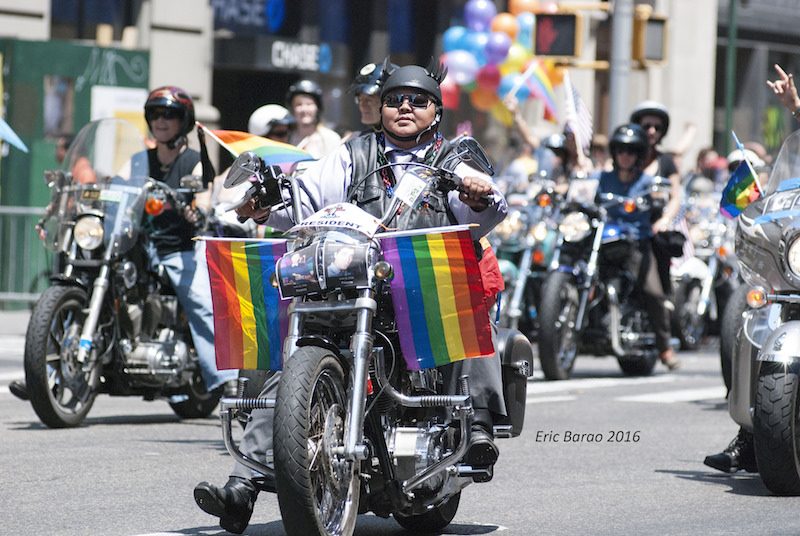 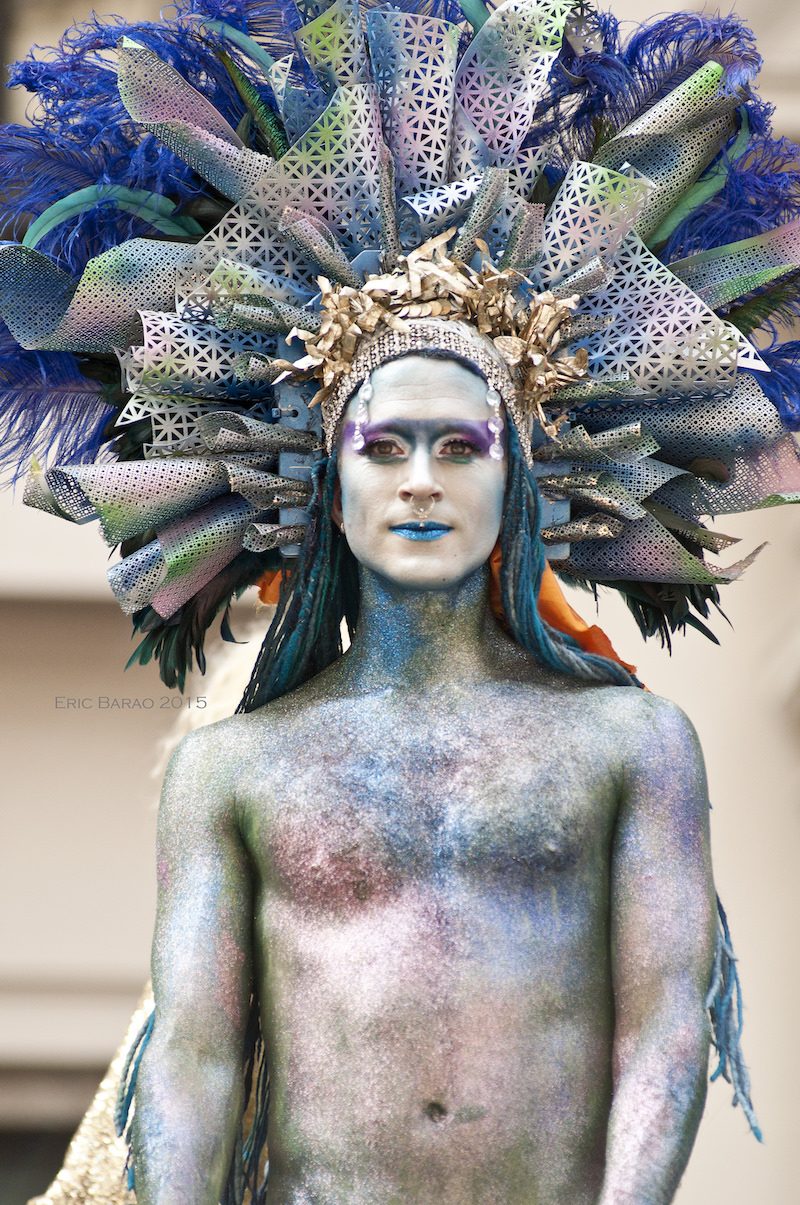 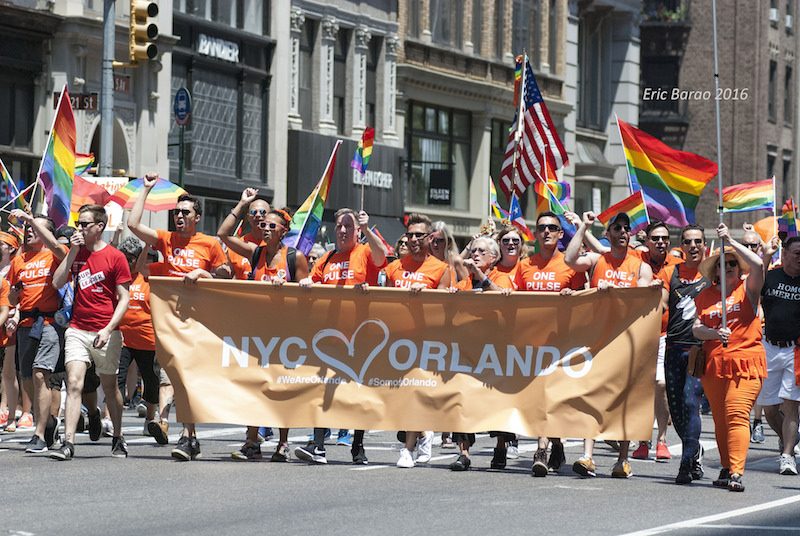 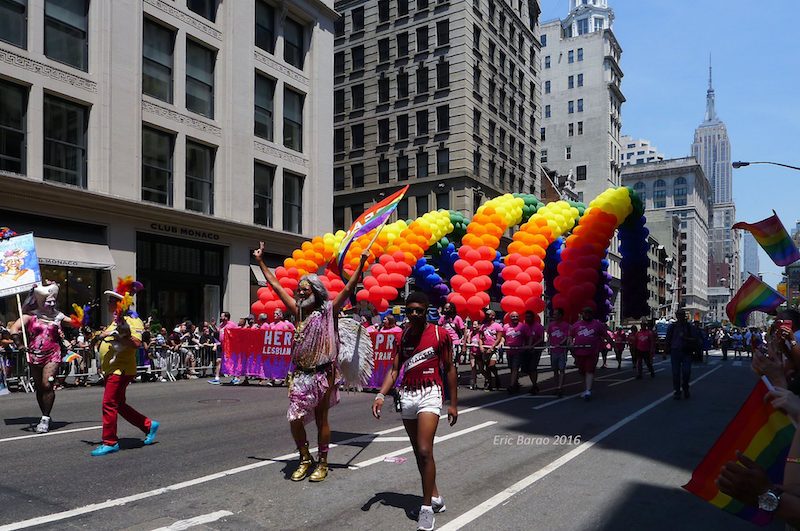 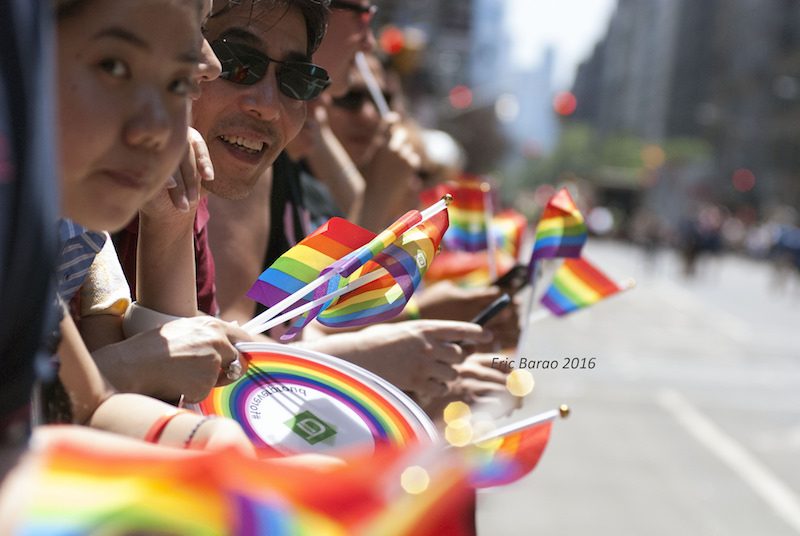 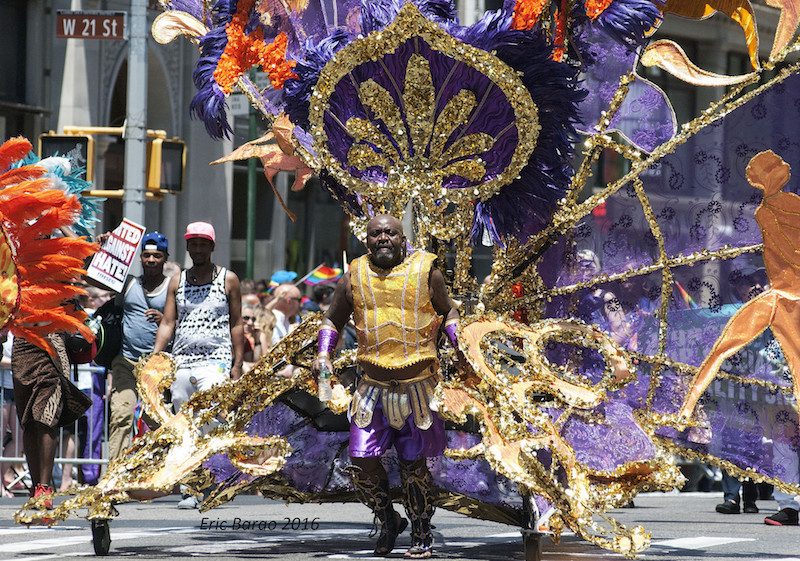 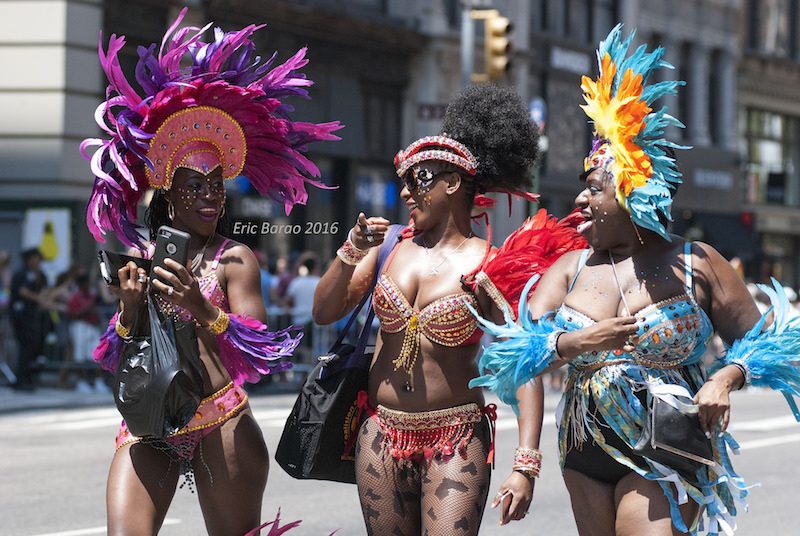 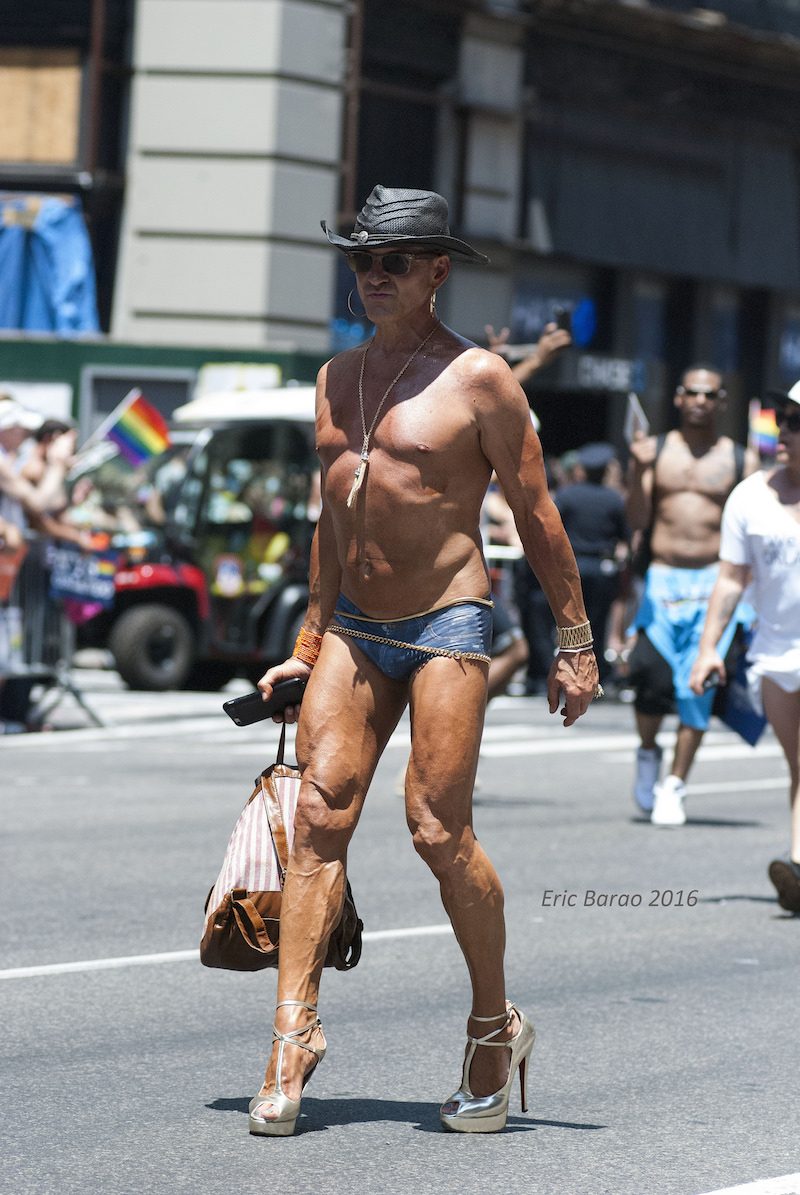 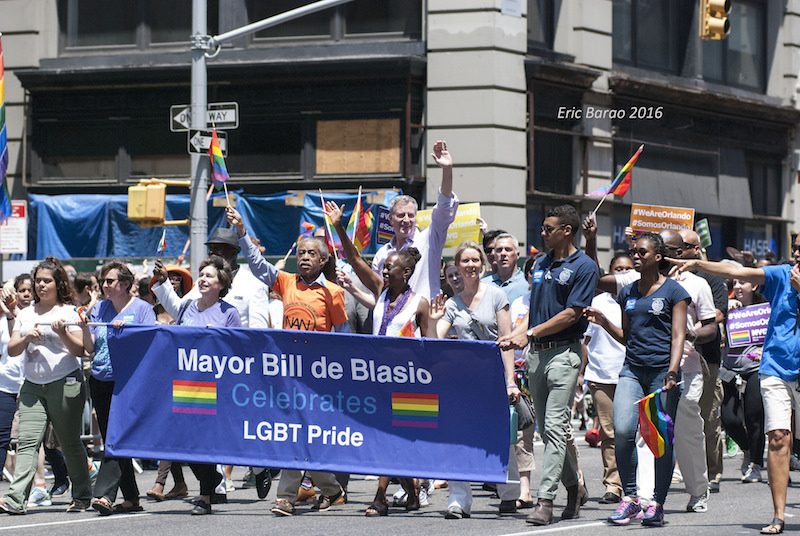 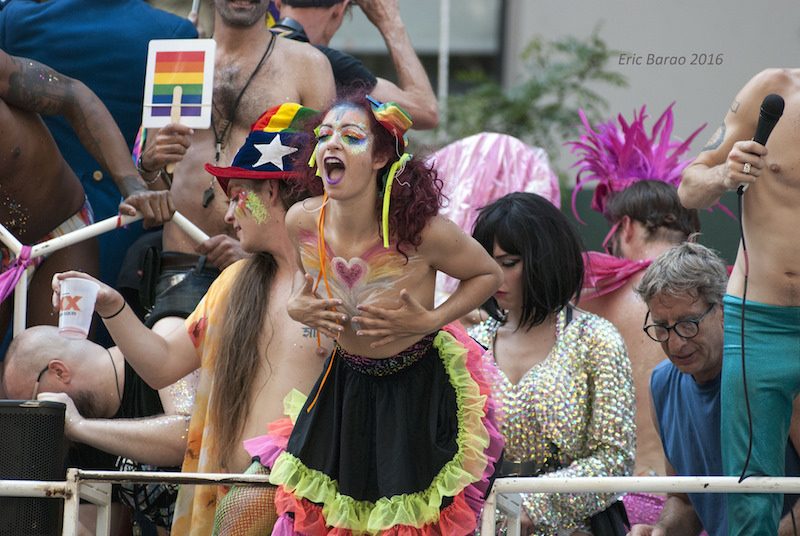 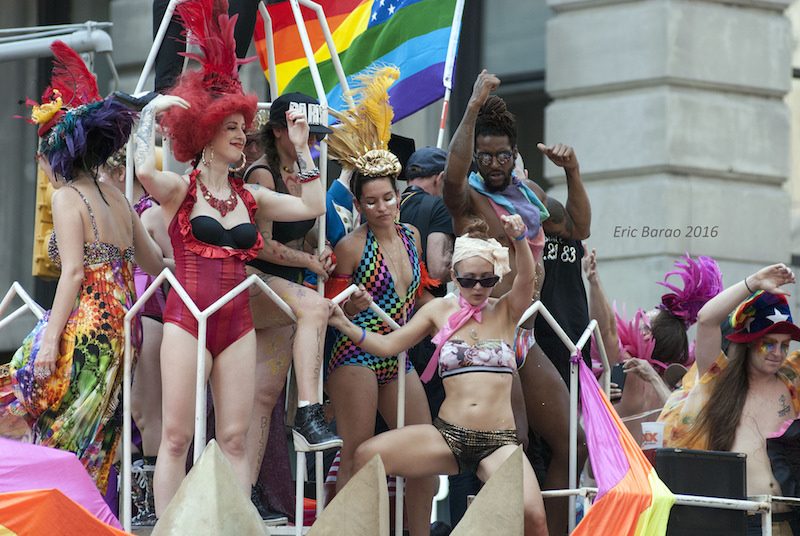 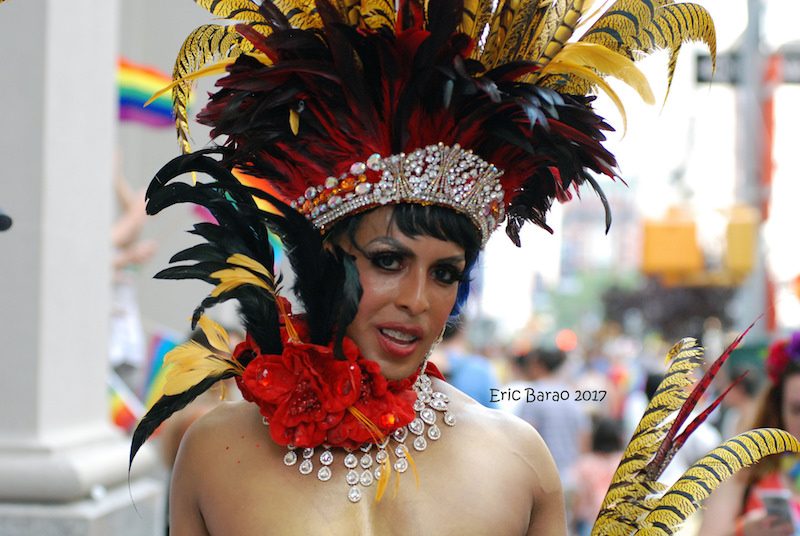 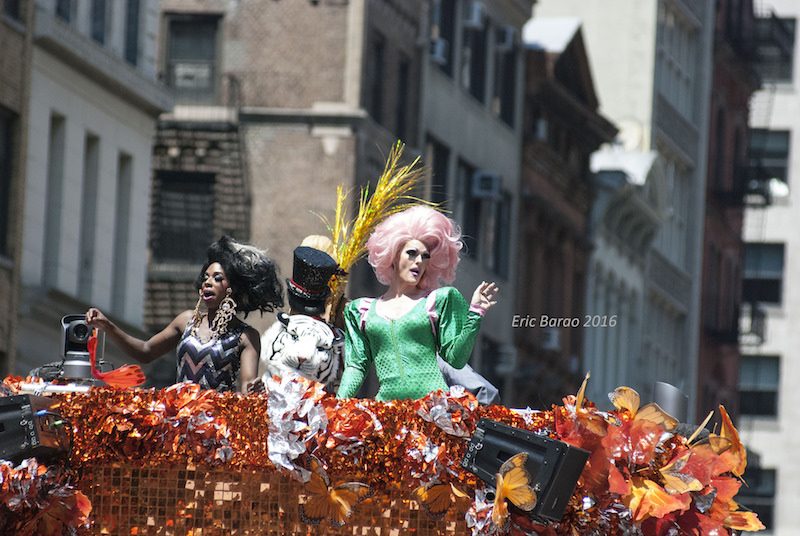 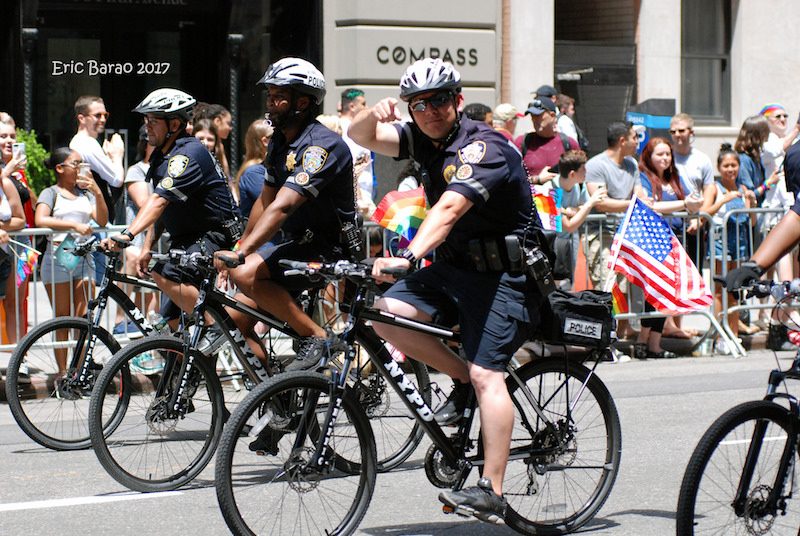 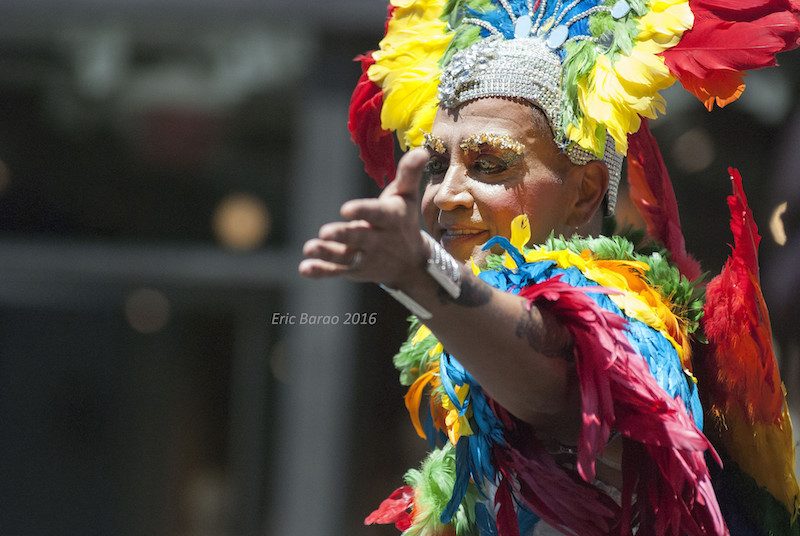 What fun! Individuals, small businesses, corporations, nonprofits, community organizations, political candidates and activists, and dozens of floats participate in the Pride parade. The cavalcade grows each year, so Pride NYC is expecting a record number of attendees and participants in 2019 (perhaps as many as 4.5 million)!

If you plan to attend, I suggest arriving extra early to secure a good viewing spot. The parade begins at 26th and Fifth Avenue, heads south, turning west on Eighth Street, passing the Stonewall National Monument before it comes north and ends at 23rd and Seventh Avenue. And if you can’t see the Pride NYC parade in person, watch it live on ABC7 from 12 p.m. to 4 p.m.

Have you marched in Pride NYC? Tell us about it in the comments! And to stay in the know for all things Pride NYC, visit the website.

All photos in this post were shot by Eric Barao. See more of his New York City photos on his Flickr page.

Also, for a wild time, try Boots and Saddle on a Saturday afternoon.  And a guide to the West Village where the modern gay rights movement began.

« Where to Shop on East Ninth Street
ODE to New York »