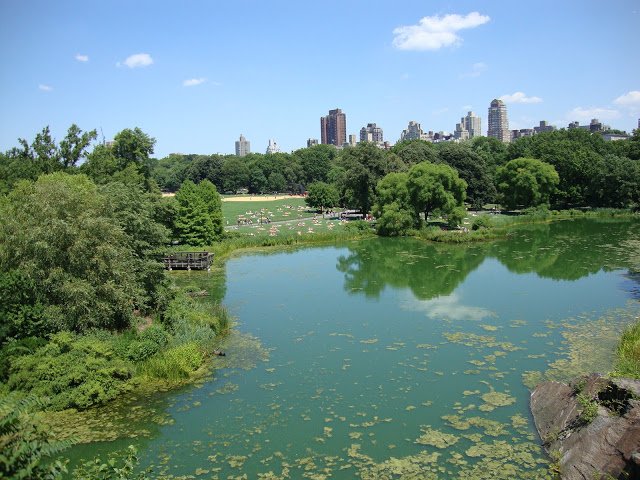 When friends and family visit New York, it is the best time to catch up on the tourist attractions that I would otherwise never do. Well, on occasion, Mike and I will try something touristy, just the two of us, but I would say that happens only a few times per year. One night very late, we went to the Empire State Building. (I was feeling kind of “Sleepless in Seattleish” and it seemed like the best idea.) In the movie, however, it was much more romantic than our trip. Waiting in line for an hour with a thousand people, while wearing heels was not so fun or romantic, unfortunately. Sometimes I wish aspects of life were more like they are in the movies –– but, only sometimes.

Last weekend, my long-time friend Lees came into the city with her daughter Nyssa. It was a warm day, but not stifling like this weekend. There are myriad child-friendly activities in the “new” New York, but we decided to stick with Central Park, and ended up by the Boathouse. The Boathouse is a restaurant and bar with a large body of water, and rowboats that can be rented by the hour. It is quite pretty and I highly recommend visiting this part of the park when in NYC.

The Boathouse is also the restaurant in SATC where Mr. Big and Carrie fell in the water during one of their lunch dates. They were both completely dressed up like they were about to attend a wedding when this incident occurred, which made it all the more entertaining.

I don’t hate the water, but  perhaps this famous television scene is permanently embedded in my brain. Obviously, we all know that I am more the city girl than the country bumpkin. I am not really “outdoorsy”. Okay, I’m not a fan of the outdoors unless I am sitting on a porch with a glass of red wine.

Wanting to be a good sport and after using all the excuses in the book, I decided to go for it. I mean really, what was the chance of me falling in?  If I really felt too aqua-phobic, I could wear one of the life jackets. So what if only children under 12 are required to wear them? With all of the boats out that day, no one would notice.  So I decided to be as brave as possible and NOT wear the jacket.

Wimp you say?  I am sure. Even though I can swim, the truth is that I am kind of afraid of falling INTO water. I do like to be the observer, but not the participant. Ever since I nearly drowned at the age of nine, due to a stupid swimming instructor who refused to help me when I was gasping for air, pools, lakes, oceans, and even ponds are not my best friends. But if an eight-year-old child can do it, so can I. So, in the boat I went.

Lees is a bit more adventurous than I am. As an unconditional friend for more than 30 years, she can appreciate my lack of eagerness for any perilous undertakings. I told Lees, who grew up in the country, but lived for many years in Manhattan, that this would be the closest I would ever get to white-water rafting or any other water sport. Needless to say,  she found my statement amusing. Much like the closest I would ever get to camping would be the Holiday Inn, or perhaps dozing off on a bench in Central Park, but with a fully-charged battery on my cell phone.

Lucky for me, I married a boy scout and he is more than capable of protecting me from the great wilderness outside of Manhattan.

« The Real Deal: Becoming a New Yorker
It Sucks To Be Me »