A ride on the Staten Island Ferry is one of the free New York attractions well worth the travel time and crowds. The 5-mile 25-minute excursion through New York Harbor promises stunning views of the Statue of Liberty and Lower Manhattan. Photo opps are plentiful, and don’t worry, if the weather gets wet or chilly, you can stay inside the cabin, peer through the windows, and capture a few shots from there.

But beyond the relaxing ferry ride lies another borough of New York City; a place where artists and filmmakers have flocked over the years seeking the polar opposite of what Manhattan offers: affordable workspace, less concrete, and miles and miles of nature.
Staten Island is undergoing a sort of renaissance, and the next few years will bring exciting changes to much of the enclave including a 625-ft. “Wheel” –– one of the tallest ferris wheels in the world –– and the Empire Outlets, both scheduled to open in 2016.

During my outing to the island led by Georgia Trivizas of Carreta Tours, I discovered the tranquil green spaces, historic homes, quaint neighborhoods, and the expanse of water visible from many locations.

Lighthouse Point
Our initial stop was Lighthouse Point, home of the National Lighthouse Museum building. Currently in the planning phase, the project will include 90,000 square feet of retail in new and restored structures, and 170 residential units, plus parking. Even though Lighthouse Point feels desolate and abandoned today, I could only envision what this plot of Staten Island will become.  Adjacent to the ferry with open water views, the location is prime for this mixed-use endeavor. Cooper Carry –– an architecture firm based in Atlanta with an office in Manhattan –– will design and manage the project.

St. George
After walking through Lighthouse Point, we meandered through the downtown area of St. George, took in the Staten Island Borough Hall, the Supreme Court House, and the Staten Island Branch of the New York Public Library, both designed by Carrere & Hastings, the team responsible for the main branch of the NYPL. Then, we hopped in a car, courtesy of Carreta, and drove down St. Mark’s Place, a charming street with colorful Victorian houses. Following, we saw the September 11 Memorial on the North Shore Waterfront Esplanade, a tribute to all those from Staten Island who perished in the attacks.

Stapleton Heights
Our tour continued through the Stapleton Heights Historic District, where the fall foliage in brightly colored rusty reds, oranges, and yellows created a backdrop for more historic houses. I really loved the vibe of this neighborhood; I could feel the sense of community on the streets. It was an unseasonably warm day and locals gave us friendly waves and smiles as they took in the good weather while chatting on the sidewalks. Stapleton Heights almost felt like a my old neighborhood in Atlanta, or some areas I’ve seen in Asheville, North Carolina. I couldn’t believe I was still in New York City.

Alice Austen House
Next up was the Alice Austen House, a Victorian gothic cottage turned museum, rumored to be one of the oldest in New York. Set on a lovely property with panoramic views of Lower Manhattan, Brooklyn, the New York Narrows, and the Verrazano Bridge, the house dates back to 1690, and was a nice relaxing spot to stop, stretch our legs, and take in the shoreline while grabbing a few photos. This is obviously a great area for dogs too –– we saw a few picnicking on the grass or walking with their owners. We couldn’t help but think of Bogey and how quickly he’d dive into the Narrows. Maybe we’ll take him along on the next trip.

Grymes Hill
We finished our driving tour with Grymes Hill and Wagner College. Grymes Hill has a high elevation (310 ft.) with picturesque views; many homes in this upscale neighborhood date from the 1920s and overlook the New York Harbor. Caves extended underneath Grymes Hill and were once used for the production of beer during prohibition. These caves eventually became a bar, which was a setting for a scene in the popular film, The Godfather. The bar has since closed and the caves are blocked by a cement wall, but the stories live on.

Snug Harbor
Although we only had time for a drive-by of Snug Harbor –– you could easily spend a day or several at this attraction alone. Once a home for retired sailors, the now regional arts center houses stately Greek Revival buildings, the Music Hall, the Council on Arts and Humanities, the Staten Island Children’s Museum, the Botanical Garden, and more. The Snug Harbor Cultural Center boasts a total of 28 buildings and remains the largest ongoing adaptive reuse project in the country.

It was getting late in the day and time to catch the ferry for a ride back into the city. Oddly, it started raining in downtown Manhattan and a rainbow appeared and then disappeared in moments. I caught a glimpse of it just in time! 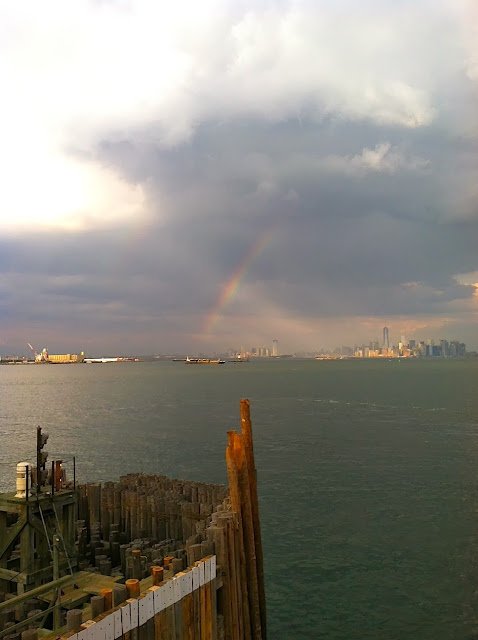 A short jaunt later, I was back at Whitehall Street where I began my afternoon. Admittedly, this was my first venture beyond the Staten Island Ferry, and I will return another time to see even more of the borough.

Thank you to Carreta Tours for a wonderful day in Staten Island.