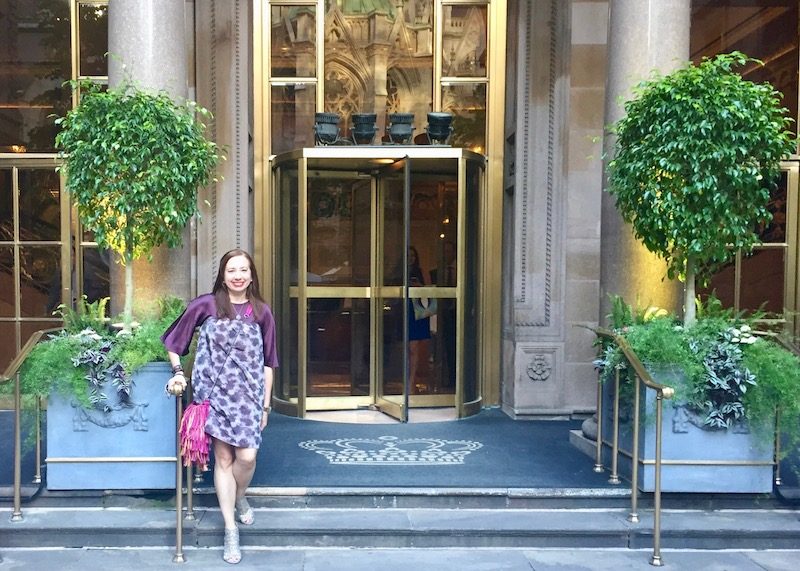 Here I am outside the Lotte New York Palace Hotel before the start of Steve Cohen’s Chamber Magic show, where miracles really happen.

I’m not one to believe in magic. Sure – I enjoy watching magicians, mentalists, and conjurors, but I’ve always believed in the trick more than the magic. That was until I saw Steve Cohen, also known as the Millionaires’ Magician. Cohen has performed for the likes of Martha Stewart, Warren Buffet, Woody Allen, Buzz Aldrin, and a host of other public figures. He’s quite the veteran of conjuring – he’s been sharing his wizardry with audiences in NYC, Chicago, Los Angeles, and other cities since 1999. For 16 years, he entertained folks at the famed Waldorf Astoria (now under renovation), but currently, the Lotte New York Palace Hotel is the home of his “Chamber Magic” show.

The 90-minute spectacle includes numerous card tricks, a disappearing silver dollar, three rings that become mysteriously intertwined, as well as “Think -A-Drink” in which Cohen proceeds to pour audience members’ favorite drinks from a single tea kettle. (Taste tests prove that the beverages are indeed real.) Several rounds of telepathy follow before the tuxedo-clad showman receives cheers along with a standing ovation. 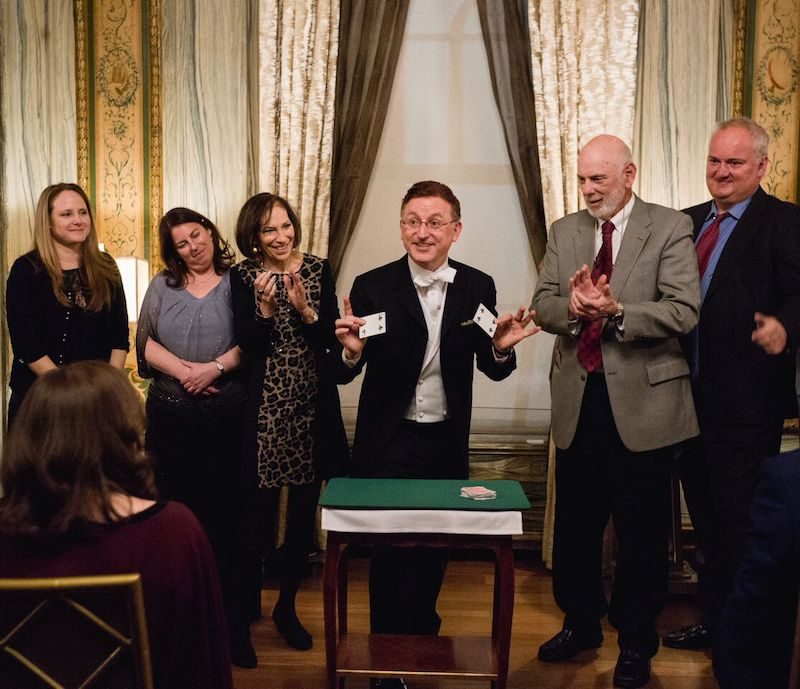 One of the coolest aspects of watching Steve Cohen work his magic (besides the trickery itself) is the formal, intimate setting. It’s true – people rarely get dressed up anymore when they attend the theater (Cohen makes that clear from the get-go) and there’s something nostalgically wonderful about a room filled with men sporting ties and jackets and women donning dresses and heels. Combine the well-attired audience with a beautiful chamber in an elaborate New York hotel like the Lotte Palace, and one can’t help but be in the mood for magic (and romance) to transpire. Hence, “Chamber Magic” is ideal for date night in NYC.

Cohen does a phenomenal job of not only executing tricks but entertaining. As he performs his tricks mere inches from his viewers, he’s slick, that’s for sure, but he’s also very funny. He tried to involve as many audience members as possible, often calling for people from the last row to come forward for a better view. He even made it a point to include the only child in a room brimming with adults. (Make no mistake, this show is for adults and not children.) 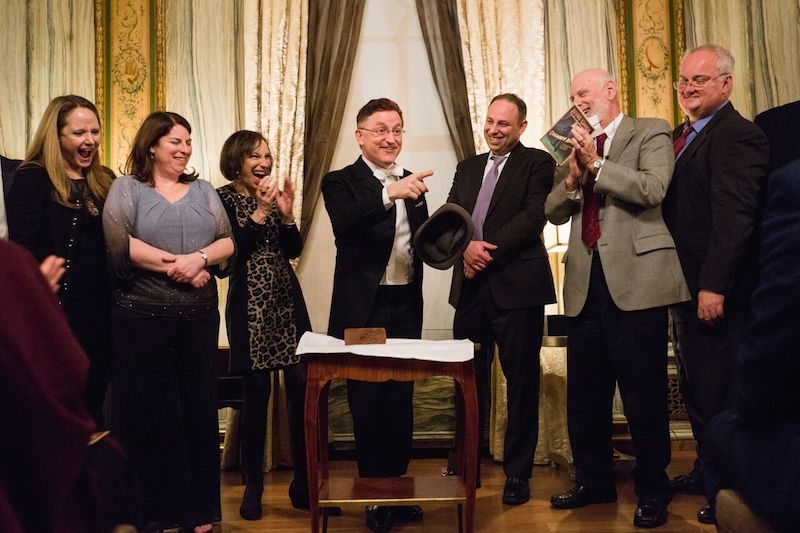 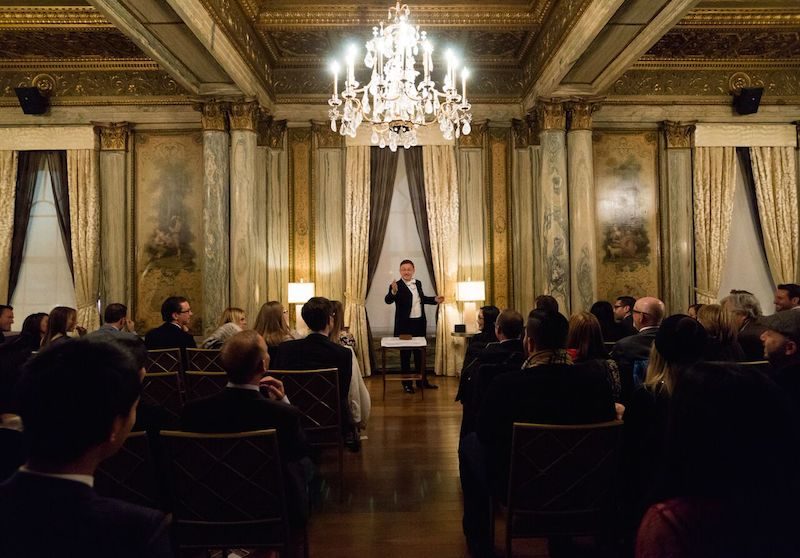 Even my husband, Mike, who is fascinated by magic and has the innate gift of understanding how the tricks happen, was wowed. Cohen singled him out during the “Telepathic Tests” section of the show where we wrote down three personal facts that few people would know about. Sure, you can find out a lot about people online these days, but Mike isn’t active on social media. And there’s nothing online that says he ran with the bulls in Pamplona, Spain nearly 30 years ago. How Cohen knew that is beyond Mike and me. I guess it was magic. 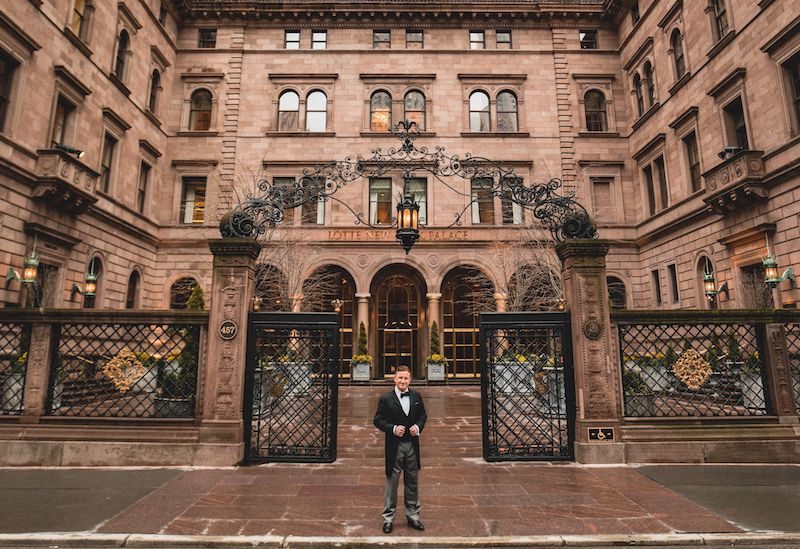 Photos of Steve Cohen courtesy of Chamber Magic. I received two complimentary tickets to the show, but every word I’ve written is mine.

Also, a theater bucket list, and a guide to Broadway theater etiquette. Plus, a classic daytime date in NYC.